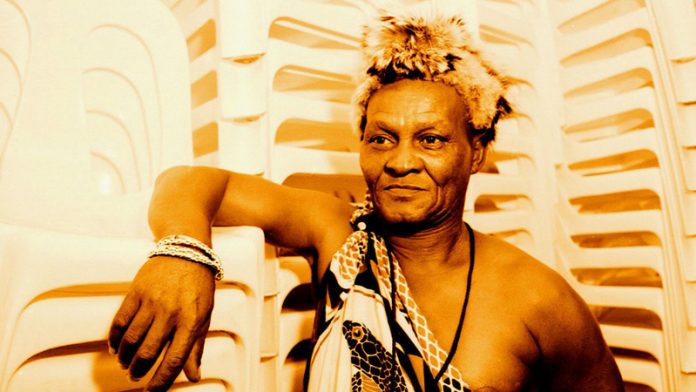 “I didn’t decide,” says master percussionist Mabi Thobejane on his entry into the world of music. “My grandparents. My ancestors, they came to me while I was sleeping. When I was born my hand was closed like this [in a clenched fist]. And when my hand was open, like ten years later.  It’s when I took over.”

The sun is starting to set over Ga-Rankuwa, near Pretoria. In typical fashion, Thobejane is resisting any attempts at an objective look into his life. Everything is unfolding in the moment.

For as long as Mabi Thobejane has been around, in early incarnations of Malombo in the late 60s, in afro-jazz band Sakhile and later the percussion group Amampondo, Thobejane has resisted following rules. Even as he has gone on to play with trance artists like Juno Reactor and various house DJs, his drums are always pushing past the edges and straining against the boundaries of metronomic rigidity. This is an irony perhaps best illustrated by the fact that his hand drum sounds can now be purchased as an Ableton kit for the use of programmers.

Around the time of Joy of Jazz festival, the mercurial hand drummer resurfaced after something of a hermitic existence spent pursuing small-scale farming in the township of Ga-Rankuwa.

He played two festival and two post-festival shows as part of an ensemble called African Dream Time, assembled by Pops Mohamed in time for the September showcase.

The line up featured Steve Newman on guitar, Pops Mohamed on kora, Femi Koya on saxophone and Tlale Makhene on percussion and Lucas Senyatso on bass.

Even as the group’s music usually bordered on the languid, often a seamless stream of noodling driven by Pops Mohamed’s kora, Thobejane found a way to stamp his presence. Thobejane often lent a considered but forceful intuition, knowing when to accompany his fellow players into and out of solos, adding gravity beneath the floating notes and triggering subtle changes in tempo.

And yet, this is a man with a professed aversion to rehearsing.

The “showman”
Asked how he connects instantaneously with other musicians, Thobejane says: “We smoke man. We smoke and be together, eat together, sit together.”

His old musical pal and occasional contributor Madala Kunene describes Mabi Thobejane as a “showman”, something which he says comes across both on and off stage. “This is true of his playing style, his dressing style or just in person,” says the Durban-born maskandi bluesman. “You can be there together but he steals the limelight, and not in a selfish way. It just happens like that. For me what that means is that we will get booked again at that venue.”

The pair first met in 1968, at a historic Malombo showing at Durban’s Curries Fountain stadium. “When I saw him I just had this desire to play with him,” says Kunene. “So that happened. He is in most of my recordings for the label Melt 2000. I also feature in his 2002 album Madiba.”

Kunene agrees that at the core of Mabi’s playing is his ability to build relationships. “Say for example we have a show in Germany. We will just rehearse on the plane, just talking and then we hit the ground running.”

While Thobejane says his drumming prowess was handed down mystically from his ancestral lineage, he served under the tutelage of the equally mystical Philip Tabane. Tabane always thought of drumming as central to the Malombo sound he sculpted out of Venda and Pedi traditions. To this day, Thobejane says Tabane was “everything” to him as a budding musician, as he imbibed malombo not only as a patented playing style but also as a school of thought.

Latter generation Malombo group members such as Given Mphago often observed Mabi from a distance as youngsters but even they can attest to his skill. “A lot of drummers in the Malombo fraternity each had their own flair but Mabi’s was a pure gift as opposed to being an attained skill,” says Mphago. “Even his persona supports that.”

Thabang Tabane, Philip’s son, says: “When they went on their extended tours to America in the Seventies, my dad would let Mabi play for like 30 minutes on his own and he would not freeze. People would never be bored watching him.”

Mphago describes Thobejane’s playing style as having evolved out of multivalent traditions that formed part of the predominant street performances that were so much a part of mid-20th century Mamelodi. “He employs rhythm patterns that are familiar in those regions, but they evolved as he played with people like Sipho Gumende and Amampondo,” says Mphago. “The last concert I saw of his at the State Theatre in Pretoria, his style of playing had evolved to a very urban style, but his tone was still specific. He has incorporated congas and timbilas for a long time but his patterning has remained specific to him. The work he does with Juno Reactor, for example, does not subscribe to familiar patterns. The last time I heard anything like that was in some Japanese drumming styles.”

Tabane says although Thobejane, his elder cousin (whom he regards as an uncle), has always pushed against the limits of what African drumming could do, he has always sounded better when he is dictating the terms or when he is allowed free reign, as it was under Dr Malombo.

According to bandleader Pops Mohamed, in the near future, the African Dream Time ensemble will assemble an album out of their recent shows and top the live music up with additional material. A national tour may be in the works once funding is sorted. Look out for Thobejane to play his ascribed role with scene-stealing aplomb before disappearing backstage and then into the Highveld hinterland.

Madala and Mabi: It’s a thing that spans half a century

Madala Kunene and Mabi Thobejane have been making music and maintaining a friendship for over fifty years.
Read more
Advertising
Continue to the category
Coronavirus