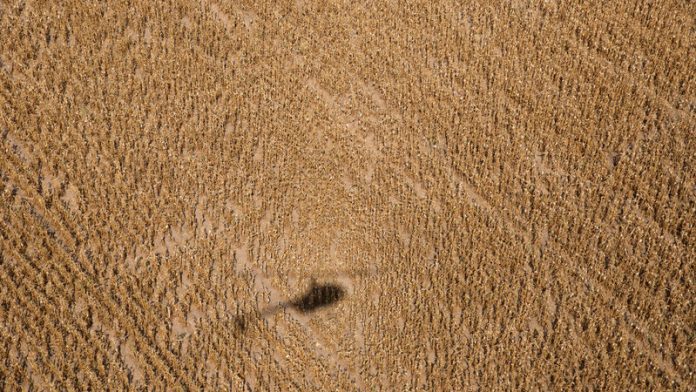 Ficksburg is a border town with an agricultural habit. Its two main streets are packed with shops selling farming equipment and cheap goods. The latter inevitably head across the bridge leading out of town into Lesotho. The former supplies a huge area of once-rich farmland. But these days that land has gone from rich red earth and green fields to dull brown sand. Farmland is transforming into semi-arid wasteland.

Massive dust storms are common in this part of the eastern Free State, with wind whipping up the now loose earth from fields and turning it into banks of brown sand. These relentlessly pummel towns such as Ficksburg, where the trickle of farmers selling up and moving to the coast is growing into a stream.

Ficksburg is ground zero for drought in the Free State. Water and the uncontrollable wildfires are all that people talk about. Notices around the town – posted by the Setsoto Local Municipality – say water is being dispensed by tankers because the dams and rivers have dried up. “All raw water sources are dry and the municipality is facing the challenge of providing even a drop of water in our taps.”

The dry Mohokare River now only provides a border on paper. To the north and west of Ficksburg – down the deeply rutted tar roads that link Lesotho to Johannesburg – the water crisis is more acute. Cattle paw at the dry crust of dams, trying to find water. The arms of windmills spin in a frantic blur in the wind, but the water table has dropped so much that nothing comes up. Few fields have been planted.

With white and yellow maize being the biggest products here, the crop failure has national implications. The Free State produces 44% of South Africa’s maize. That yield dropped by a third last summer. In September, its agricultural department declared a drought disaster, joining four other provinces in declaring that a second growing season would be hampered by drought.

The national drought is the worst in 23 years and is the first one being experienced in democratic South Africa. The last two droughts coincided with El Niño weather patterns in the Pacific Ocean, which warms the world’s largest body of water and creates drought in much of the southern hemisphere. Its appearance in 1982 and 1991 led to two year-long droughts across South Africa.

Willem Landman, chief researcher at the Council for Scientific and Industrial Research (CSIR), says a strong El Niño will add stress to systems already feeling the impact of a warming planet. The CSIR said last month that temperatures across Africa were rising at twice the global average. Long-term predictions on rainfall are hard to make, but he says there is “high probability” of dry conditions until at least April 2016. This is bad news for farmers because it means a continuing, and probably intensified, drought, he said.

Grain SA says the drought to date will cost farmers R10-billion in lost crops. With maize prices increasing and food for humans being prioritised, livestock farmers must spend R2-billion more to import grain for animals. Chief executive Jannie de Villiers says the price of maize will increase by a further quarter this summer – that is, if El Niño does not further exacerbate rainfall problems.

“Next year is the great unknown. If we have another season with low yields, we will have farmers that cannot survive the knock.”

The impact on average food prices is hidden in the size of the global food market. But quarterly statistics released by the agriculture department show that the price of maize in shops has already gone up by a third, thanks to the drought last summer. In response to the crisis, the government has created a multidepartmental national drought task team.

The new agriculture minister, Senzeni Zokwana, said earlier this year: “This is a disaster for the whole sector. Without the farmers, there will be no sales next year. Without production, there is no food.”

But the government can do little besides mitigating the impact of the drought by enforcing water-saving measures and moving water between catchments. South Africa is already the 31st-driest country in the world and relies on Lesotho’s Katse Dam to provide enough water for agriculture and industry in Gauteng, Mpumalanga and the Free State. In Limpopo and the North West – where agriculture is almost solely rain-fed – the only solution is rain.

The worst-affected farmers are emerging ones, who do not have the capital and savings to survive the loss of consecutive harvests. Owing to land transfer issues – in many cases, the government has kept title deeds – several hundred thousand farmers are unable to get loans and insurance. Previous droughts have seen farmers that were already operating at a loss being forced to sell their property to pay back debts. This led to mass layoffs of farmworkers. In Warden, on the border of the Free State and KwaZulu-Natal, the layoffs during the smaller 2008 drought saw the size of the nearby township double as workers from the surrounding maize farms settled there.

The impact on the whole region is much worse. South Africa’s neighbours are also experiencing an extended drought – water levels in the Zambezi River have dropped so low that Victoria Falls regularly stops flowing. The World Food Programme’s last bulletin said: “Significant drops in crop production are expected in southern parts of Zimbabwe, Malawi, Madagascar, Lesotho and South Africa.”

This was because of the “uncharacteristically low” rainfall being experienced in the region, it said. This was coupled with a steady drop in crop yields in the area over the past five years. South Africa’s 31% drop in maize production was therefore a big problem for Southern Africa, it said. “This poses a serious cause for concern, as it might trigger higher food prices in the short term and a [food] deficit in surrounding countries.”

The department is fighting with a small Free State town, which it accuses of continuing to employ an illegal immigrant
Read more
National

Municipalities are in complete disarray, with many of them flagged by the auditor-general for deliberate lack of accountability and tolerance for transgressions by political and administrative leadership while billions are squandered.
Read more
Africa

The world has a chance to improve the lives of women, especially those living in Africa
Read more
National

When South Africa eventually emerges from the fog of the Covid-19 crisis, will policy makers be ready to grasp the nettle of farm scale, and promote the large-scale redistribution of land to small-scale producers?
Read more
Advertising
Continue to the category
National