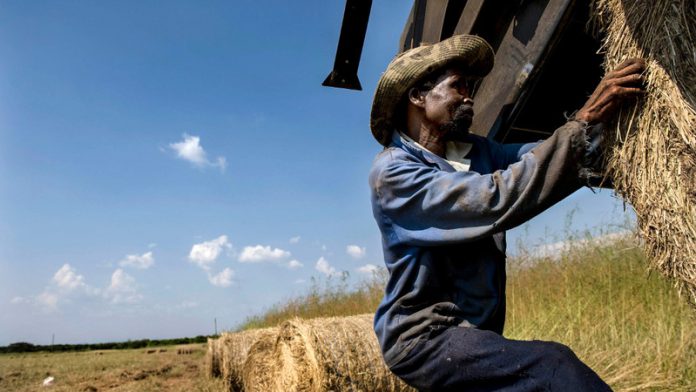 The worsening drought is emblematic of a policy ­climate that is getting much tougher for the ­agricultural sector.

Last weekend, the ANC national general council (NGC) reportedly endorsed a policy seeking to get all commercial farmers to cede 50% of their land to farmworkers.

It also reaffirmed its backing for proposals announced in this year’s State of the Nation address, namely the introduction of land ceilings, limiting the amount of land that individuals can own, and a prohibition on the foreign ownership of land.

The 50/50 policy, officially titled Strengthening the Relative Rights of People Working the Land, was drawn up by Gugugile Nkwinti’s department of rural development and land reform almost two years ago.

At the time of its release, interest groups throughout the sector were united in their rejection of the proposal, albeit for different reasons.

Civil society pointed to the threat of more farm evictions and the inadvertent subsidisation of farmers with state funds, and commercial agricultural bodies questioned the impact it would have on investment in farming. But almost everyone agreed that the state could not afford to buy out half of all commercial farmland, as the document proposed.

Nevertheless, earlier this year, President Jacob Zuma announced that 50 pilot projects testing the 50/50 policy would be rolled out around the country. At the same time, he announced that the government would draft laws on the land ceilings and effectively ban foreign ownership of agricultural land.

The NGC’s apparent endorsement of the 50/50 policy has reignited debate on the subject but has not provided any more clarity on a policy that is still deeply problematic, according to its critics. It is also not clear what, in fact, the ANC meeting actually endorsed.

Professor Ruth Hall, of the Insti­tute for Poverty, Land and Agrarian Studies (Plaas) at the University of the Western Cape, said, although the NGC mentioned the policy, it endorsed the view that farmers should give up equity in their businesses rather than have the state buy them out. “This would be an equity sacrifice, whereas the 50/50 policy explicitly states that government will buy out equity,” she said.

Another question, Hall said, was whether such a “sacrifice” would be compulsory. It could not be if it involved the state buying equity, she said, as the government did not have the money to buy out half the equity of every commercial farm.

If it required an equity sacrifice then it would have to be compulsory, she said, and this was counter to Nkwinti’s policy.

The ANC did not respond to the Mail & Guardian’s requests for clarity on the matter.

Investor concerns
The NGC decision has not eased investor concerns. In a research note, Peter Attard Montalto, a senior emerging-markets economist and strategist at the financial services group Nomura, said: “The increased prescription of equity ownership is worrying, and one of the reasons behind such low rates of private sector investment at the moment in the economy as a whole but in particular in key industries, including agriculture.”

Progress on the pilot projects and the practical details of their roll-out is not clear, and the ministry did not answer questions about them. It is also not clear how the policy has developed since its release, and if key criticisms levelled at it have been addressed.

The policy states that the government will pay for 50% of commercial farms, which will be shared by the workers. The money will be placed in “an investment and development fund to be jointly owned by the parties, constituting the new ownership regime. The fund will be used to develop the managerial and production capacity of the new entrants to land ownership, to further invest on the farm, as well as to pay out people who wish to opt out of the new regime.”

But, Hall said, this was not true land reform. “It’s equity sharing, which has proved to be a ­massively complicated way of transferring government subsidies to ­commercial farmers in the name of farmworkers.”

Nkwinti placed a moratorium on farm equity schemes in 2009, Hall said, after a departmental study found they did little to improve the lives and benefits of farmworkers. The study has not been made ­publicly available.

“The minister should release his own commissioned report on equity schemes, which he claimed at the time showed what a waste of public money these were, and explain why he is now advocating them,” she said.

Hall has also written in the past that the policy inadvertently undermines workers’ tenure and could hasten the eviction of farmworkers nearing 10 years of employment.

Cost factor
Cost is another factor. According to the most recent statistics from the department of agriculture, forestry and fisheries, the total value of capital assets on farms, including land, machinery and implements and livestock, amounted to R359-billion. Total farm debt was slightly less than R117-billion. This suggests that, even if the government did not pay market rates to buy out farmers, and debt was ignored entirely, it would require more than R100-billion in additional funds.

But there are alternatives to the policy, according to Plaas, which include agricultural black economic empowerment (BEE) partnerships. The sectors charter allows large commercial enterprises to earn BEE accreditation in return for transferring a shareholding to farmworkers and is a way for the sector to transform without needing state funds.

The lack of policy clarity has alarmed organised agriculture.

Jannie de Villiers, the chief executive of GrainSA, said he did not believe that the model would promote sustainable agriculture and food security.

False impression
But Aggrey Mahanjana, the managing director of the African Farmers’ Association of South Africa, questioned the criticism of the 50/50 policy. It was one among many policies the ANC had endorsed as far back as the Mangaung elective conference in 2014, he said. A false impression was being created that, “if you have a farm, 50% of your farm would have to be given to farmworkers. It’s not like that,” he said.

Following the announcement of the pilot programmes, Nkwinti had invited farmers to put forward models that granted recognition and value to farmworkers, which could include equity, Mahanjana said. The minister would then examine the models and decide on the best.

Many farmers now viewed this as a benefit, Mahanjana said. One of the reasons was that it protected them against the institution of the proposed land ceilings, as it allowed farmers to continue working bigger farms alongside their workers.

“Many see this as a [way] for them to protect against losing their land completely. Most farmers, especially white farmers, have accepted this because the emphasis is not really on the 50/50 [policy]; the emphasis is [on giving] farmworkers some form of recognition,” he said. “It doesn’t scare people any more.”

The government had acknowledged that the costs involved were “impractical”, which was why it placed the onus on farmers to come up with different models for reform.

But there was a broader concern, not only from farmers but also from the banks and many other institutions, that land reform in general faced a funding challenge.

Some industry bodies have been open to talks on alternatives to the government’s 50/50 policy.

In March this year, AgriSA gave a presentation to Parliament on alternative models.

The organisation has compiled an idea bank that incorporates agricultural projects that are examples of best practice in land reform.

The examples it put forward point to the need for a three-way partnership between commercial farmers, the beneficiaries and the partners providing the financing. One example AgriSA gave was that of the Rhebokrand dairy trust, a scheme in Humansdorp in the Eastern Cape.

Rhebokrand’s ownership is shared by a workers’ trust, which holds 52%, and a dairy trust, made up of commercial farmers, which holds 48%. The land and fixed assets are the property of workers, and the dairy trust owns the cows and moveable assets.

According to AgriSA, the financing came from government grants and a loan by the commercial farmers involved in the project.

But AgriSA concluded that the sector needs an “unrestricted voluntary range of options” as well as a menu of financing and risk-aversion products. It also needs greater policy certainty.