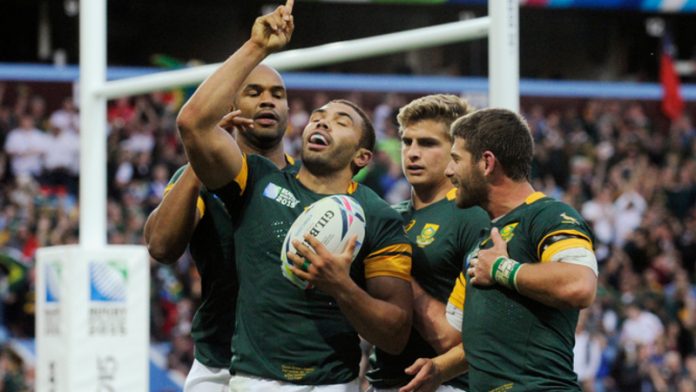 How distant the opening weekend of this Rugby World Cup now feels. Back in mid-September

England were in pole position in Pool A courtesy of a bonus point victory over Fiji while South Africa’s head coach, Heyneke Meyer, was apologising to his country following the Springboks’ defeat to Japan. Few would have bet that Saturday night on South Africa making the last eight and England failing to do so.

To see the Boks looking increasingly assured at England’s customary base at Bagshot is to be further reminded that World Cups are a mental and physical marathon, not a week-long sprint. Early setbacks such as the one suffered by Meyer’s squad can have a serious galvanising effect and the South African side to face Wales this Saturday has the ominous look of a team which has rediscovered its mojo in the nick of time.

Meyer is certainly a man transformed from the shaken figure who looked ready to throw himself off Brighton Pier following the Japanese shocker. He can laugh about it now – “I cried for about 24 hours and then thought about committing suicide for an hour … I’m joking” – but the setback seems to have resurrected the part of the Springbok psyche that treats winning as non-negotiable.

“There are no leaders in times of peace, it’s when there is war that you see their character,” pronounced Meyer, having named a starting XV showing one change on the wing in the form of the recalled JP Pietersen, who scored three tries against Samoa.

“The most important things about bouncing back was not to make any excuses. It’s not easy when you come to the World Cup and suddenly have to win every single game but I think it helped us. There were some hard words and we changed a few things in our gameplan. It becomes a bit easier once you get confidence and momentum but I have said to the players this week we are right back where we started.”

There is one big difference, though. At the outset South Africa were looking to rely on their most experienced warhorses, Jean de Villiers and Victor Matfield, to guide their younger talent through the tournament maze. Instead, with De Villiers invalided home and Matfield still struggling with a hamstring problem, they have had to revert to less experienced combinations in the second row and in midfield in the form of Eben Etzebeth and Lood de Jager and Jesse Kriel and Damian de Allende respectively.

None are over the age of 23 yet all seem potentially equipped to challenge the received wisdom, oft quoted by Meyer himself, that major titles are not won by kids. The head coach has been doing his research and is starting to pedal a different line of argument. “I always say to the youngsters that Boris Becker was the best at 17 when he won Wimbledon. Mike Tyson was a machine at 21. Look at the best generals like Alexander the Great. He was 21. It’s a mindset.

“Some young guys are very strong individuals and know exactly what they want out of life. We will really back the youngsters and I think they can go to the end.”

With fly-half Handre Pollard still only 21, the same age as Kriel, there is no baggage left over from South Africa’s last quarter-final appearance, an ill-fated defeat to Australia four years ago. Crucially they also have the likes of Fourie du Preez, Pietersen and Bryan Habana around, all veterans of the Boks’ World Cup triumph in 2007.

The 33-year-old Du Preez has now assumed the captaincy and is rated by Meyer as “one of the most astute players I have ever coached.” The scrum-half is one of a growing South African contingent playing in Japan but, unlike England, playing abroad has proved no barrier to a Test comeback. “This year he wasn’t sure about playing and I begged him to come back because I know he is the type of guy who if you have him in your team it clicks,” said Meyer.

“He is like Richie McCaw for the All Blacks. I was on my knees and asked him to train with the side. Right up until we left South Africa he was not sure whether he would come because he was struggling with his back and his kicking game. But he has been a revelation around the team as a leader and knows exactly what I want He is a genius, an unbelievable player. He is the type who, if we go through the tournament, will only get better.”

Adriaan Strauss, Jannie du Plessis, Ruan Pienaar and Pat Lambie, meanwhile, have all been recalled to the South Africa bench for a contest Meyer believes will be “an arm-wrestle” right to the end. “I don’t believe the game is going to open up, we don’t need an impact player,” insisted the head coach. “We need a guy who can scrum.”

Wales can expect a full-frontal assault from a team which is oozing fresh intent from every pore.