Storm in a beer can jams Jo’burg road 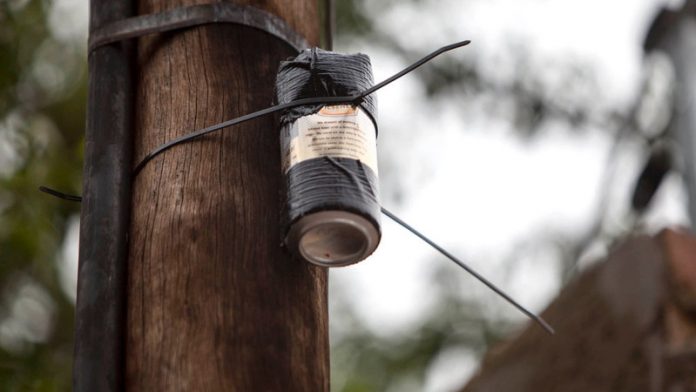 Last Saturday Ricardo da Fonseca, in all innocence, strapped a beer can to a streetlight pole. He did not, everyone now agrees, intend it as an act of terror.

But the world being the kind of place that it is, his beer can ended up entirely closing a one-block section of a busy Jan Smuts Avenue in Rosebank in Johannesburg to car users on Tuesday, snarling up lunchtime traffic badly enough that the bomb squad had trouble getting to what had ominously been declared “a scene”.

As everyone waited – including the many hundreds of people stuck in traffic – Da Fonseca did the explaining while his boss, Marisa Holley, did the apologising.

“I’ll show you, there’s nothing in there,” Da Fonseca told one group of mildly amused police officers.

Both would repeat themselves many times before everyone dispersed and the four-lane road was reopened to impatient motorists.

What finally satisfied the police that they were not, in fact, dealing with a bomb, was Da Fonseca getting on a borrowed stepladder, removing the cable ties holding the can to the pole, and carefully stripping away the black duct tape at the top to show the detective in charge the piece of paper inside – and the lack of anything else.

“That’s all?” asked one police officer. “Where is the equipment?” And so the conversation turned from the interrogation of a suspect into an impromptu lecture on the art of ­pinhole photography.

A day later Da Fonseca rehashes his explanation, which is no more complicated than his equipment.

“You take a can, you cut the top off. You slide in a piece of photographic paper, seal it up light-tight, you poke a hole in it, you put it on the pole with a cable tie.”

In this case the hole in the can was aimed across the busy Jan Smuts arterial at a building Da Fonseca’s employer, the Black Africa creative agency, is upgrading as its new headquarters. He was hoping to do a three-month exposure to have ghostlike images of the construction work layered on top of each other, a kind of time lapse in a single photograph. Instead, he captured three days worth of light in an image that unexpectedly survived police intervention.

He had also thought it would be safe. Black Africa, which is meticulously documenting its conversion of the former residential building, had considered putting up actual cameras to do proper time-lapse photography, but was pretty certain such equipment would be stolen. A beer can is both less valuable and less menacing, Da Fonseca reasoned. Until a passer-by reported it as a suspicious object, that is.

Da Fonseca is not the first artist to close a road with a pinhole camera. In February an Atlanta freeway was closed for more than two hours as police investigated such a device. In August it was a park in Brighton, and so on. Pinhole cameras are an ancient technology, but since September 11 2001 they have been causing regular mini-panics in cities around the world.

“We didn’t know about all those incidents,” said Black Africa director Veejay Archary. “We do now.”

​Urban Village is not a band, it’s a collective of underground artists