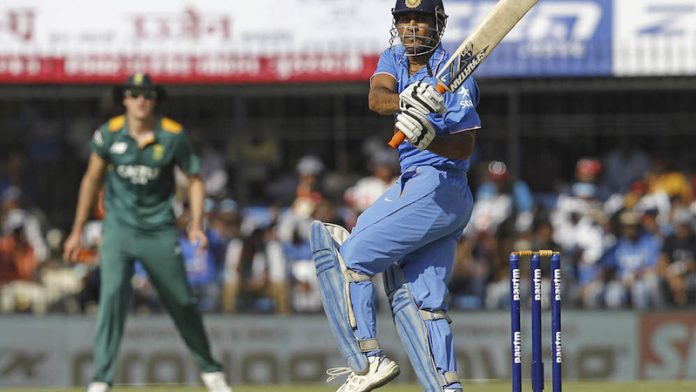 Indian legend MS Dhoni has been under unprecedented scrutiny after just two weeks of South Africa’s tour of the country. Having spent his entire career in the unquestioned and unquestionable territory once occupied for 20 years by Sachin Tendulkar, suddenly a few brave souls raised their heads above the parapet and wondered whether he still had “it”.

On Wednesday, he blew those heads off with a brilliant, unbeaten 92 to rescue his team from looming disaster at 124-6 and onwards to a modest but competitive 247 that was enough to win the second one-day international in Indore by 22 runs and square the series at one game apiece.

Watching Dhoni on the field over the past decade has been accompanied by a sense of destiny, certainly judging by his body language. His demeanour suggests that he has already accepted his and his team’s fate. The jury is undecided about whether this is a vital part of his act or is, in fact, the truth.

“It’s hard to get away from it when you’re captain,” said Graeme Smith, who is commentating on the series. “You’re always attending press conferences or being interviewed and the questions are asked all the time. Even on the field you see your face on the big screen and you know you’re being spoken about critically.

“But that’s the brilliance of MS, the ability to perform when you’re under pressure,” Smith said.

Actually, those observations are far more appropriate to Smith himself, although he would not have said so. Dhoni’s ability, if that is what it can be called, is apparently to be impervious to the tension created by the critical observations of others.

“I always had the impression that he could take or leave cricket; he never seemed to need it or have the desire to prove anything to anybody,” said Eric Simons after spending a few years in the Indian change room as bowling coach working with Gary Kirsten.

Having walked away from Test cricket before the end of a losing series in Australia several years ago, Dhoni has continued his international career in the limited-overs formats strictly on his own terms. He will be almost 38 by the time the next World Cup is played but, for now, has the T20 World Cup in his sights – in India, in March next year.

When India were thrashed and embarrassed in England four years ago, Dhoni was heavily criticised by the notoriously tough media pack. Some of England’s players even joined in, notably Kevin Pietersen. Kirsten, Simons and the third South African in the change room, mental conditioner Paddy Upton, were all surprised by Dhoni’s serenity – he refused to rise to the bait.

A year later, when England were similarly despatched on Indian soil, Dhoni hit the winning runs in the final match and calmly walked off the field, still in his pads and carrying his bat, straight to the disconsolate England rooms and shook each player by the hand and thanked them for the series – taking special care over Pietersen’s greeting. What comes around, goes around.

And so it was again this week, except it was only four days apart, not a year.

In the first game of the series, in Kanpur, Kagiso Rabada bowled a brilliant final over at Dhoni to defend just 11 runs and win a game India should have cantered. Dhoni calmly accepted responsibility afterwards in his characteristically unflustered manner. It’s only a game of cricket, right? Not for millions of his countrymen.

And there he was again, delivering when it mattered as he has done for most of his career.

His well-documented passions are motorbikes and military history, but some believe they are just the veneers he uses to protect his real self. Give the people a story. Others believe that really is him – just a straightforward, simple chap who happens to be very good at cricket but doesn’t treat it as a matter of life and death.

Nobody claims to know, not definitively anyway.

South Africa will feel as if they are starting from square one again when the third match starts in Rajkot on Sunday.

Another fine bowling display in which Dale Steyn, Morné Morkel, Rabada and the irrepressible Imran Tahir all excelled was undone by a batting display of infuriating softness started, sadly but yet again, by the impetuosity and immaturity of Quinton de Kock.

Playing on instinct and believing in yourself are fine – in theory and when form is not a problem. But De Kock should have played enough cricket by now, despite his tender years, to understand the responsibilities that come with opening the batting. Having dashed to 34 at a run a ball, but having lost Hashim Amla along the way, it was his job to anchor a modest run chase – not to chip a tame catch to long on.

It wasn’t just De Kock, naturally. Most of the top order will feel they were more responsible for their dismissals than the bowlers, while David Miller, like most batsmen suffering horrible form, received the best ball of the match.

Still, two crackingly entertaining matches have set the series up beautifully. It might even distract a little attention from the Springboks in England. Just a little.