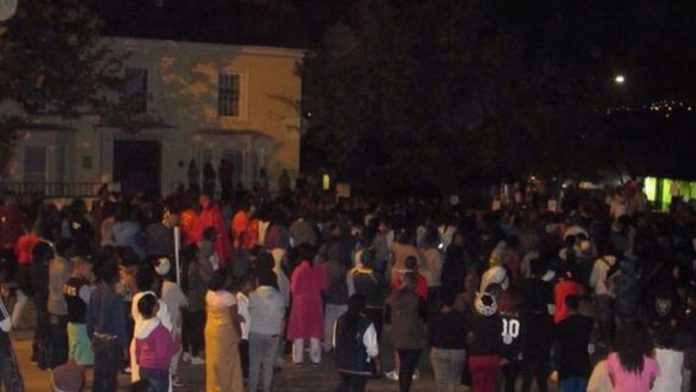 Students of Rhodes University were woken up on Monday morning by the sounds of protesting students singing struggle songs, and calls to “vuka” (wake up) and “phuma” (come out).

The wake-up call was in service of the “Purple Fees” strike action orchestrated by the private Facebook group of the same name. It has now progressed to #RUShutdown.

On Sunday evening, students received text messages in which they were told the location of the strike, the starting time and a rule – no information must be leaked to white students “because it [could have been] leaked and [the students] could be stopped”.

According to the Whatsapp message, students were to meet at 12am at the Drama department on campus, to take materials such as benches and bins to blockade the street and to subsequently meet at the nearby Drostdy Lawns for a quick briefing. The ultimate plan was to “shut down yonke lanto” [shut down all activities at the University].

The protest, said the text message, was organised to voice dissent over the Rhodes University fee structure for the coming 2016 financial year. It relates to the Minimum Initial Payment (MIP), in the form of a 50% deposit of the full tuition fee for the year, which students must pay by early January in each financial year and the expected annual increase in tuition fees for the year.

Students were encouraged to join and spread the word to others but to respect the embargo on information as the intention was to “go viral from 5am”. They were then directed to the “Purple Fees” Facebook page where they could access further information.

This plan was largely followed. Students met and subsequently marched up Somerset Street in Grahamstown to the Education and Law faculties and then to the Eden Grove Lecture complex, where they continued to barricade entrances to the campus.

The march moved to all entrances to the university, with a brief stop outside the Mullins Sports Complex at approximately 1.30am. There student protest leaders announced that the strike would move to all residences on campus where protesters would use their fingerprint biometrics to gain access to residences to wake up other students and encourage them to join the strike.

The march began past the Nelson Mandela Dining Hall and the Africa Media Matrix, up to the residences perched at the highest point of the campus, Joe Slovo House, Calata House and Margaret Smith House among others. Protesters were spurred on by struggle songs such as “Asiphelelanga” (we are not complete) and “Senzeni Na?” (what have we done?). They stopped to beat on signage and dustbins on campus to wake up students who were inside their residences.

Campus security began to remove the barricades that was set up, and the students then split up in groups and headed back to the sites of their barricades to rebuild them. Following this, at 2.30am on Monday morning, students started burning tires at the Drama department where the protest had begun.

Management meets students
At approximately 9.30am, students were met by members of the managing body of the university, including Dr Ian L’Ange, excutive director of infrastructure, operations and finance, Dr Stephen Fourie, registrar of the university and Rhodes University Vice Chancellor Dr Sizwe Mabizela.

Mabizela reiterated the fee determination structure, which includes a number of elements but specifically the “important number of considerations, most of which revolve around the quality of the academic project and infrastructure” that support it. Mabizela asked students to bear in mind the external factors in providing the “education that [the students] deserve” such as the attraction and retention of high calibre staff.

He singled out “the electricity tariffs that have been going up by more than 33%” and the “significant drivers of the cost of education” being the cost of books and electronic data materials “sourced from other parts of the world [which] are purchased in dollars and pounds”, the cost of which are increasing with unfavourable movements in foreign exchange rates.

Solutions
Students then resolved to meet at 6pm to discuss their demands, which they would then present to the university in order to reach the consensus required to end the #RUShutdown.

The march, led by various student bodies, ANC affiliated Sasco, the EFF student chapter and also party unaffiliated student leaders saw the return of one of the most storied groups of the Rhodes Must Fall narrative on the campus this year, the Black Students Movement, who joined the protest in the late morning. Black Students Movement leader, Thenjiwe Mswane, ultimately led the protesters off the Rhodes University campus at approximately 11am to the EastCape Midlands College to support students gathered there to protest the misappropriation of National Student Financial Aid Scheme (NSFAS ) by the college.

After the students arrived at the college, a male student attempted to climb over a locked gate, which caused a frenzy among other students.  The police unleashed teargas on students. The situation calmed down and Mabizela went to the college in an attempt to communicate with the college management. He was not let inside the premises. Around 1pm, students went back to Rhodes campus.

The strike is expected to continue until university management meets the students demands.

Mandisa Mpulo and Noko Pela are students at Rhodes University.