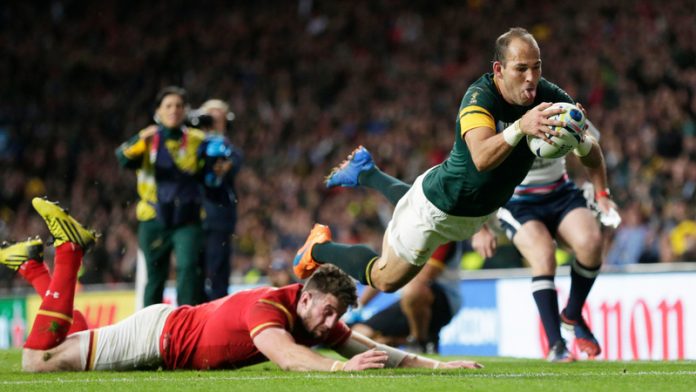 More than two months later, London will host the fourth round of the Rugby Championship.

Also known as the semifinals of the Rugby World Cup.

Following victories by Argentina and Australia to conclude the quarterfinals on Sunday, the last northern hemisphere optimists were eliminated.

Six Nations champion Ireland, which had never reached the semifinals, and Scotland, which reached the last four way back in 1991, will have to wait four more years. For the first time, all four semifinalists come from one hemisphere — and it is south of the equator.

The Irish were smashed by Argentina 43-20 in Cardiff. Scotland, the team least expected to break the south’s hegemony, came the closest. The Scots led Australia into the last minute until conceding an unlucky penalty which Bernard Foley nailed in the rain at Twickenham for the Wallabies to prevail 35-34.

Back to Twickenham the Pumas and Wallabies will head next Sunday for the second semifinal.

Those longtime rivals advanced on Saturday also in contrasting ways: The All Blacks demolished France by a record 62-13, while the Springboks needed a late but brilliant scrum move to see off Wales 23-19.

The south has dominated the Rugby World Cup – the All Blacks, Springboks, and Wallabies have won it twice each. They traditionally lead the world rankings. Only England, from the north, has broken the southern grip on the Webb Ellis Cup with an extra-time victory over Australia in the 2003 final in Sydney.

Every tournament up north has been won by a southern team – Australia in 1991 and 1999 in Britain, South Africa in 2007 in France – and one of them will again in two weeks.

But never before has four teams shut out the north – even more remarkably on their turf.

After seeing his Wales team lose to a southern hemisphere side for the 28th time in 30 tests on his watch, Warren Gatland, a former All Black, was asked what advantage the south had over the north.

He had a salient point. Winters in South Africa and Australia, particularly, are far more mild than in the British Isles and France, where fields for long periods are turned to mush by rain, or frozen by snow.

“Playing conditions are not good up here in November, December and January,” Gatland said.

Poor fields and poorer conditions hinder ambition and developing skills. Meanwhile, players in the south are able to train and perform in better weather and on harder fields. The ball may become just as wet, but with better footing and an attacking mindset, the game is much more open.

It helps players develop more all-round skills, perfectly encapsulated in Cardiff on Saturday when All Blacks replacement props Charlie Faumuina and Joe Moody ran into gaps in the French lines and offloaded for tries.

That inspired the Argentines, who destroyed any lingering notion they play 10-man rugby by tearing apart the Irish out wide to achieve their biggest ever win over Ireland. Four, often brutal, years in the Rugby Championship has made the Pumas rework their game.

“Yesterday, watching the All Blacks, I wondered ‘When will we be able to win with 40 points like the All Blacks?’ and today that’s what we did,” Argentina hooker and captain Agustin Creevy said. “I don’t think we’re at their level yet, we are really improving our game. We’re still going toward that goal.”

The weather looked like helping Scotland on Sunday. No team seems to love the rain more than the Scots, and it began to shower just before Scotland center Mark Bennett made an intercept in midfield and scored a converted try that put them ahead of the Wallabies at 34-32 with six minutes to go.

However, the rain also conspired against them. When they tapped down lineout ball, it bounced around, and rebounded forward off replacement lock Josh Strauss to replacement prop Jon Welsh, who couldn’t help catch the ball and concede an immediate penalty for offside.

The Springboks also won at the death, having the composure, belief and weaponry to execute a set move off a five-meter scrum to break Welsh hearts.

That is, play the full 80 minutes, with the confidence and ability to pull something out of their sleeve.

That’s why the south still rules.