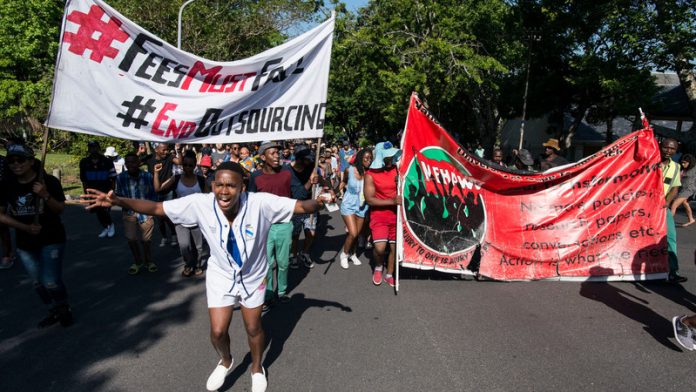 Students burned tyres, occupied buildings and threw up barricades at the University of Cape Town (UCT), leading to 23 arrests on Tuesday, as protests continued to spread from Johannesburg across the country over plans to increase tuition fees.

Police said the 23 UCT students would face charges of disrupting the peace for refusing to vacate a UCT administrative building. About 200 UCT students, workers and academic staff gathered at the Rondebosch police station where they were being held and demanded that they also be detained in solidarity.

“They will probably throw stun grenades at you and fire rubber bullets but do not disperse! Do not move!” shouted one of the march leaders, Dudu Ndlovu, over a loudhailer.

Students and workers had occupied the building to protest against proposed 2016 fee increases and the outsourcing of labour at the institution.

March leader, Chumani Maxwele – the man credited with sparking the earlier #Rhodesmustfall student uprising at UCT – made it clear they would not move if their comrades remained behind bars. “Arrest us!” he said, banging on the fence. Police, dressed in riot gear, remained unmoved.

Stellenbosch University authorities obtained a court interdict to bar protests, as students gathered in groups on the campus east of Cape Town. Live television footage showed police putting out fires and removing rubble at an entrance to the UCT.

Peers at Wits University in Jo’burg, where protests dubbed #FeesMustFall on Twitter began on 13 October, overturned vehicles driving into the campus.

“The situation yesterday and today is very, very problematic for us. Some examinations could not take place and work was disrupted everywhere on campus,” Francis Petersen, UCT’s acting vice-chancellor, said in a statement.

Noloyiso Rwexana, a police officer in the Western Cape province where UCT is located said “more arrests are imminent” if students failed to observe the court interdict.

Fee increases
At least five campuses were engulfed in demonstrations after universities proposed hiking fees by up to 11.5% next year.

Students say the move will further disadvantage black learners in Africa’s most advanced economy who had little access to universities during decades of white apartheid rule.

Higher Education Minister Blade Nzimande said on Monday that each university catered for its own finances and that the government could not afford to provide free education for poor students.

But university administrators say without much bigger subsidies from the government they have no option but to raise fees to maintain academic standards.

Universities say the weaker rand currency – down 12% against the greenback so far this year – has made it hard to afford library books, journals and electronic research equipment priced in dollars.