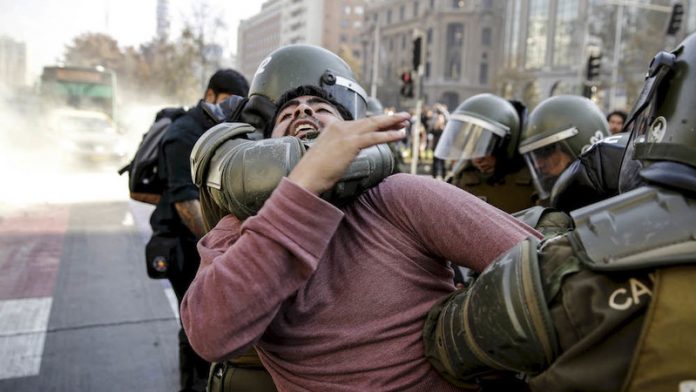 The Gran Torre Santiago, the tallest skyscraper in South America, which looms over Chile’s capital city of Santiago, has turned into a symbol of the country’s miseries. Originally touted as an emblem of prosperity, the 64-storey tower block was completed a year ago, after 10 years’ work, but still stands empty.

After decades of growth, Chile’s economy has suddenly ground to a halt as the world price of copper, its main resource, has tumbled. Once seen as a benchmark for fair dealing in public affairs, the country has been shaken by unprecedented corruption scandals, tarnishing the image of policymakers of all stripes.

The ratings of the socialist president, Michelle Bachelet, have plummeted. In July she admitted that it would be a struggle to deliver the reforms promised during the 2013 election campaign by the end of her term in 2018. Many voters hoped her second term of office – after she governed from 2006 to 2010 – would be a historic opportunity to rid the country of the legacy of military dictatorship between 1973 and 1990.

To address inequality, Bachelet promised a new Constitution, backed by tax reform and free schooling, challenges the ruling centre-left ­coalition failed to address in the country’s transition to democracy from 1990 to 2010.

“There is no question of giving up all hope of change, but we must accept reality,” she says. “We have fewer resources and the ability of the state and our political system to achieve such far-reaching structural reforms, in so short a time, was undoubtedly overestimated.”

Growth forecasts for 2015 were reduced from 3.6% to 2.5%. The president has had to rethink her plans. Free schooling will be introduced gradually, between 2016 and 2020, benefiting the poorest students (60% of the total intake and not 70% as originally intended).

Tax reforms were not well received when they were announced last year. Countless adjustments have been made since. The aim is to bring in $8.3-billion (nearly 3% of the gross domestic product) to fund free education. Lastly, the text of the new Constitution, to replace the version imposed by General Augusto Pinochet in 1980, is still under review by Congress.

Bachelet is the target of a hail of criticism in the largely right-wing press. She has twice denied rumours that she was planning to resign, but she was forced to reshuffle her government.

She is said to have lost heart since a corruption scandal hit her eldest son, Sebastián Dávalos, who allegedly used his political connections to obtain a $10-million loan for property investments. He has denied the allegations and his mother claims to have no knowledge of such dealings.

Some observers claim measures to contain social unrest are increasingly severe. Sociologist Marcos Roitman cites demonstrations by students and indigenous Mapuche people in southern Chile, and the death, in July, of a copper worker, during a demonstration demanding higher pay. – © Guardian News & Media 2015