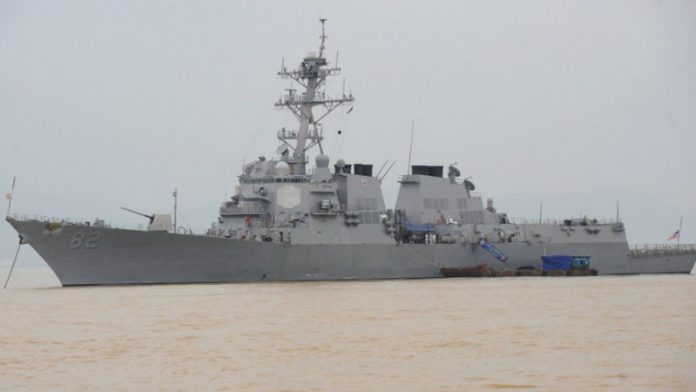 The move has prompted Beijing to furiously denounce what it called a threat to its sovereignty.

The USS Lassen passed within 12 nautical miles – the normal limit of territorial waters around natural land – of at least one of the formations Beijing claims in the South China Sea.

Washington’s long-awaited move to assert freedom of navigation may escalate the dispute over the strategically vital waters, where Beijing has been transforming reefs and outcrops into artificial islands with potential military use.

China claims sovereignty over almost the whole of the area, raising concerns it could one day seek to dictate who may transit its bustling sea lanes.

Several neighbouring countries including the Philippines, a US ally, have competing claims and the dispute has raised fears of clashes in an area through which a third of the world’s oil passes.

The US action was part of the country’s “routine operations in the South China Sea in accordance with international law”, an American official told AFP. “We will fly, sail, and operate anywhere in the world that international law allows.”

China’s foreign ministry spokesman Lu Kang blasted the exercise, saying the ship had “illegally entered” the waters near the islands “without receiving permission from the Chinese government”.

Beijing “resolutely opposes any country using freedom of navigation and overflight as a pretext for harming China’s national sovereignty and security interests”, he said, adding it would “staunchly defend its territorial sovereignty”.

In a commentary, the official Xinhua news agency condemned a “flagrant and baseless provocation” that added to regional instability.

But despite the Chinese rhetoric, analysts said more such operations could be expected.

Beijing’s so far limited response showed that it had had “its bluff called”, said Rory Medcalf, director of the international security programme at the Lowy Institute in Sydney.

“The US and its allies and partners should now help the Chinese leadership in saving face, by emphasising that freedom of navigation operations are normal, not extraordinary,” he said.

Balance of power
There have been repeated confrontations in the area between Chinese vessels and boats from some of its neighbours who assert rights to the waters, particularly the Philippines and Vietnam.

Both are members of the Association of Southeast Asian Nations, which has long called on China to negotiate a code of conduct in the region, as are fellow claimants Brunei and Malaysia. Taiwan also makes claims over part of the sea.

Manila has infuriated the world’s second-largest economy by taking the dispute to a United Nations tribunal, and Philippine President Benigno Aquino said the US action demonstrated that “the balance of power says that there is not just a single voice that must be adhered to”.

Beijing’s South China Sea reclamations have been seen as an attempt to assert its claims by establishing physical facts in the water, but Aquino said: “There is no de facto changing of the reality on the ground.”

Beijing has repeatedly said the construction work is primarily for civilian purposes, and Chinese President Xi Jinping during a visit to Washington last month pledged that the country will not militarise the area.

But satellite images of the islands published by the Washington-based Centre for Strategic and International Studies show that Beijing has reclaimed millions of square metres of land in the Spratlys, known as Nansha in Chinese.

The pictures also show a host of facilities with the potential for military applications being developed, including as many as three runways, at least one of them 3 000 metres long.

‘Long overdue’
The US, which is engaged in a foreign policy “pivot” to Asia, and China, which has the world’s largest military and is expanding the reach of its navy, are jockeying for position in the Pacific.

Tuesday’s operations were “not directed at any specific country,” the US official said.

“US forces operate in the Asia-Pacific region on a daily basis, including in the South China Sea,” he added.

The sail-by was “long overdue”, said Bonnie Glaser, a senior China expert at CSIS, adding that the exercises “should be done quietly, regularly, and often”.

“There should be no media fanfare,” she added. “The way this has been handled has left the Chinese believing that the US is challenging its sovereignty rather than simply exercising freedom of the seas.” – AFP