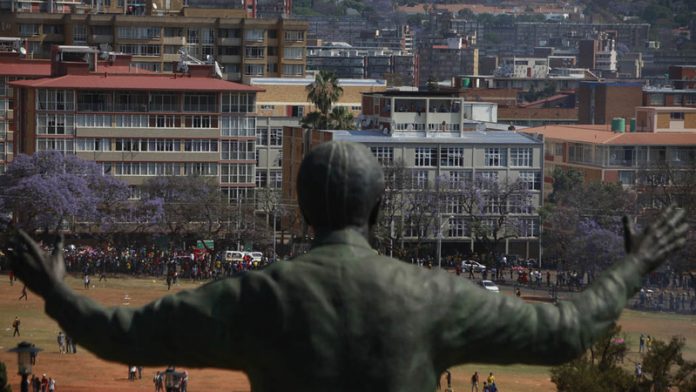 Treasury must make the required funds for free higher education available immediately and scrap the debt of all students. On the other hand, the South African Revenue Service (Sars) should stop taxing textbooks and introduce a higher education tax targeting the wealthy.

Private residential company City Property should reduce rent for all students and poor residents in Pretoria.

Lastly, the South African Reserve Bank must be nationalised.

These were the demands of about 500 students who took to the streets of central Pretoria on Tuesday, marching peacefully on the treasury, Reserve Bank, Sars and City Property.

Under the banner of the Occupy Movement, an informal bloc of various student organisations in Pretoria, the students marched on each of the four bodies between 11am and 5.30pm. Song and dance characterised the march under the blistering sun.

The movement is known for its numerous attempts to occupy the building housing Minister Blade Nzimande’s higher education department as part of a protest demanding the introduction of free university education.

Reserve Bank governor Lesetja Kganyago met the students at the entrance of the bank to receive their memorandum. A heavy police contingent monitored the march.

Student leader Abuti Elmond Magedi led the marching students, the majority of whom were from the Arcadia and Pretoria West campuses of the Tshwane University of Technology (TUT). The institution was closed on Tuesday because of the student protests over funding, but spokesperson Willa de Ruyter said TUT would reopen on Wednesday.

Addressing fellow students outside the Reserve Bank, Magedi said the four institutions were impeding the introduction of free university education. “We’re calling for nationalisation of key sectors of the economy to fund free education.”

The students marched to Sars after handing over their demands at the Reserve Bank. Magedi urged students repeatedly to maintain “high levels of discipline” to keep the march peaceful.

“You’re right my children, you’re right,” retorted an elderly hawker as students marched pass him singing Senzeni Na, the struggle era hymn that asks “What have we done?”.

A Sars official received the students’ memorandum at the closed entrance of the building, which had a strong police presence.

The students demanded that Sars abolish tax on prescribed textbooks. Their memorandum said: “We’ve noticed very sadly that Sars contributes to our exclusion [at universities] and the super-exploitation of our poor, working-class parents by taxing students’ study material.”

Tax on books makes them “exorbitant and unaffordable to us and our highly exploited working-class parents”, students told Sars.

Students do not expect Sars to find it difficult to accede to this demand, said Magedi. “Why do we keep taxing students in this country if corporates are evading tax? You have been failing to tax the superrich. Stop taxing the poor. Tax the rich.

“We want to graduate so that the SABC will have chief operations officers that have studied,” said Magedi.

But the treasury has told the Mail & Guardian previously that it would not consider zero-rating textbook value added tax (VAT). Replying to questions in September 2014, spokesperson Phumza Macanda said the option would not benefit students.

“The issue has come up repeatedly but we do not believe zero-rating is the answer. Our view is that consumers would likely receive a relatively small portion of any benefit arising from zero-rating.

“It would likely benefit suppliers more than consumers as is the case with some items that are currently zero-rated. Rising incomes, a more competitive domestic market and fostering a reading culture will have a more significant impact on the purchase of books than a change in VAT treatment would.”

In 2004, then finance minister Trevor Manuel rejected a 100 000 signature petition to abolish VAT on books.

Lwazi Giba, a chief director in the treasury, accepted the students’ demands. Magedi read the memorandum that said the department has “refused to commit funds to fund free education in this country for a period of 21 years since the dawn of the neo-liberal democracy in this country”.

“It is with regret to notice that treasury continues to budget less than 2% of the [country’s] GDP for education, thus denying thousands of students their basic right to education as enshrined in the Constitution,” students told the treasury in their memorandum.

Two employees of the company received the students’ memorandum that demanded a decrease in rent, the renovation of all “deteriorating” buildings, improved services and the supply of student support services, including wi-fi.

The students demanded that City Property start contributing funds to higher education. “For many years your company exploited us and our parents through charging exorbitant rent for poor services; we demand that you pay back,” said the memorandum.

A significant number of college and university students in Pretoria stay in City Property’s flats. “We can’t demand that university fees must not increase [next year] and then City Property increases rent. How can you study when you don’t have anywhere to study?” asked Magedi.

The students are now awaiting proper responses from the four institutions.

“United students of this country demand free education now and if capitalism can’t educate us, then it must perish. We vow to continue fighting for these demands until they are all met and we shall use every revolutionary weapon in our arsenal,” the students concluded in each memorandum.