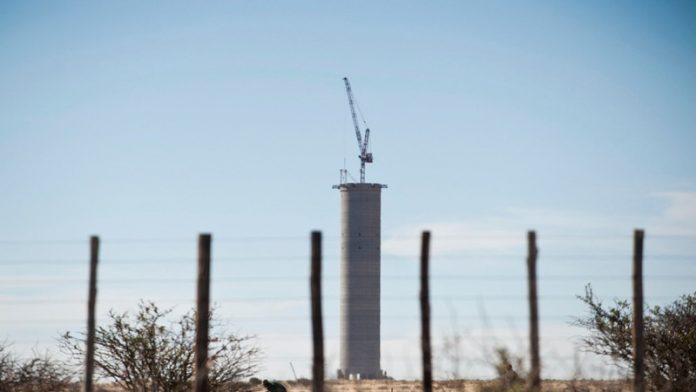 Plans for independently-produced green power would see it contribute more energy megawatts than the contentious 9 600MW nuclear build, but cash-strapped Eskom is an albatross around the neck of South Africa’s renewables.

Experts say Eskom’s stranglehold on the electricity grid is allowing it to put the brakes on and prevent an abundance of affordable clean renewable energy coming onstream.

This green energy can be brought onstream at a cheaper cost than power from the Medupi and Kusile coal giants. And renewable energy is funded by the private sector with no cost implications for the public sector funds which are apparently maxed out.

Critics say Eskom is dragging its feet on upgrading the grid to take renewable power even though it secured a R4-billion loan from KfW German Development Bank for this purpose – and despite the fact that the Renewable Energy Independent Power Producer Procurement programme is lauded for its success worldwide and is seemingly the only portion of the energy sector that is working well.

Since 2011, in the space of four bidding windows, 3 800MW of green power and R168-billion in private sector investment has been committed through the programme.

Four years since its inception, some of the programme’s projects already feed into the national power system – they even have a cash positive outcome for Eskom.

But now it is at risk of significant delays and loss of investor confidence, because the troubled utility is unable to hold up its end of the deal in which it connects and buys the green power. The 1 200MW, as allocated in the fourth bidding round, hangs in limbo and plans for an additional 6 300MW in renewables, is in jeopardy. Part of this is a planned 1 800MW as part of an expedited bidding round for which submissions close on Monday.

Eskom claims it does not have the funds required to connect further renewables projects to the national power system, or to purchase energy from them, and is seeking a breather until 2018.

Internally, the parastatal has suspended the issuing of budget quotes to independent power producers (IPPs) until April 1 2018, and applied to the National Energy Regulator (Nersa) for an exemption of its obligation, as per the grid code, to do so.

Budget quotes are a vital part of the renewable programme because independent power producers selected as preferred bidders need them to reach financial close. The budget quote is provided by Eskom and includes a number of components, including estimated connection costs.

On Thursday afternoon a spokesperson for the national energy regulator, Nersa, said Eskom’s request had been rejected on October 14. Eskom spokesperson Khulu Phasiwe, however, said the utility understood the process was not yet finished.

Eskom said the decision to temporarily halt issuing budget quotes was taken to protect the utility’s financial sustainability because no capital allocation was included in the multiyear pricing regime for IPPs beyond Bid Window 3 (MYPD3).

“Eskom believes that its application for exemption from the grid code was correct because issuing binding budget quotes without guarantees of how it will source the funding for such a capital intensive project would have been akin to reckless trading,” it said.

Mark Pickering, managing director of independent power producer Globeleq South Africa, said Eskom’s request for an exemption from its licence conditions for a period would seem, on the face of it, an outrageous request. “Eskom is a monopoly supplier of network services. As customers we can’t go anywhere else,” he said. “Fortunately, we have the regulator who has to protect the interest of consumers.”

The effect of such an exemption being granted would be that the renewables programme would grind to a halt.

“This part of the power sector is actually working,” Pickering said. “Now Eskom seems to be trying to shut it down.”

Eskom has applied for an exemption yet the renewable energy procurement programme’s developers carry a great deal of the connection cost and the utility got the R4-billion loan earmarked to strengthen the grid and connect green energy.

Eskom said the R4-billion loan (equivalent to €300-million at the time) would go primarily towards integrating the Kiwano solar thermal power station in Upington and the Ingula Pumped Storage Scheme.

The deputy director of KfW’s Pretoria office, Ihno Baumfalk, said that while some of the money would go toward integrating specific projects into the grid, IPPs would certainly benefit from the strengthened network. For the renewable energy rounds one to three, Eskom has spent R2.4-billion on the backbone infrastructure to enable the evacuation of energy from the IPPs.

A developer can request a budget quote for full cost, for a portion of own-build or for self-build – in which Eskom’s responsibility to connect the project is entirely diminished.

An industry player who did not want to be named said Eskom’s public statement appeared not to consider that many IPPs applied for self-build and that this has no cash flow effect on Eskom.

According to the renewable energy programme’s agreement, Eskom would carry the deep connection costs, which involve strengthening the grid, and developers would foot the shallow costs of getting the power to the substations.

But “there are numerous cases where IPPs have proposed to build everything at their own cost”, said the source.

Industry insiders say that everything could be resolved if private sector investment in the grid was allowed. “The problems are solvable. But it’s politics”, said one energy industry expert.

Davin Chown, chairperson of the South African Photovoltaic Industry Association, said the grid issue had been building up for a while. “We know we have inherited grid infrastructure not being what it should be and we have not been upgrading and extending it in the right places.”

In the renewable energy procurement programme, the department of energy procures power production and buys megawatts on behalf of Eskom, while the national treasury underwrites it. But in that set of relationships, planning has erred. Eskom is unable to reliably plan, given the persistent uncertainty as to which projects will be chosen as preferred bidders in each round and – importantly – the location of each project and where it will connect to the grid, according to Chown.

Eskom’s plea to the regulator also comes at a time when the renewable energy programme is already cash positive by R300-million in the first half of the year, as estimated by the Council for Scientific and Industrial Research.

In the face of load-shedding, Eskom has run open cycle gas turbines on diesel since the beginning of the year and incurred billions of rands in unbudgeted costs.

Independent energy consultant Doug Kuni said, “Eskom has limited sources of financing. It is revenue from the tariff and Nersa, and debt secured by government guarantees. Unless government provides more guarantees or equity injections – the only other avenue Eskom has is the tariff.”

The regulator deals with each element of Eskom’s cost requirements and money for renewables is provided for in the tariff determination, said an industry expert, who asked to remain anonymous: “The issue Eskom faces at the moment is they are burning well beyond their budget for diesel. And that money has to come from somewhere.”

Earlier this year Eskom failed to reopen the tariff decision in its bid to claw back money spent on diesel.

Pickering said Eskom’s commitment to get the renewable energy programme’s power online is small, relative to what it spends on Medupi and Kusile, “It’s a question of how Eskom is prioritising where its cash goes – and it is currently prioritising its own asset base.”

Pickering said Eskom’s Nersa application related less to the grid and was more about paying for the energy.

“They budgeted for first rounds but as more and more projects come online, Eskom has to shell out more cash, and pay in 43 calendar days.”

Nersa can only allow for what Eskom applies for, said Pickering. “They did not apply for all of the programme. That is the fundamental error.”

Nersa told the Mail & Guardian this week the MYPD3 determination included the renewable energy programme up to round three, adding it has concurred with the minister regarding round four.

“However, in accordance with the MYPD methodology, Eskom has to apply for any pass through.”

Eskom said it would continue with the network integration studies, develop and cost the appropriate solutions associated with IPP connection applications received for Bid Window 4 and the expedited programme, so that budget quotes can be issued once the “financial situation” is resolved.

This article was originally published in the M&G newspaper on October 30 2015. An incorrect figure relating to private sector investment, R168-million, has since been corrected to the correct amount, R168-billion.

Boikagong Centre in Mahikeng has been closed for almost two years because it did not meet safety requirements. The discarded children say they want a safe place to learn, but instead endure rape and other violence
Advertising