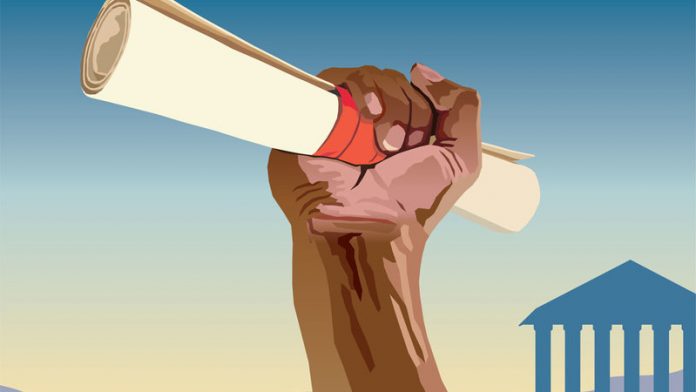 In 1997 the Rand Corporation, a conservative think-tank in California, produced a report titled Breaking the Social Contract: The Fiscal Crisis in United States Higher Education, which essentially argued that the nation’s universities had priced themselves out of reach of working-class and middle-class families. The function of higher education in decreasing inequality, simply put, was stunted by the escalation in tuition fees.

The role of higher education in attaining a socially just society in South Africa is not contained in a social contract. It is taken for granted. The funding model is unsuitable for this purpose. We must find ways to unfetter the imagination of higher education so that it opens its doors to the children of the poorest without fear of financial exclusion.

Students at the Durban University of Technology have campaigned gallantly for financial access to higher education for many years. They are constructing the social contract. The bad news is that with each demonstration, the contradictions of our notions of a developmental state are glaring. Nobody seems to care.

So what is different now? Is it our version of the Arab Spring – that moment when, suddenly and without warning, a variety of social and economic forces congregate to produce the potential of a new order through mass mobilisation?

I support the campaign call of the nation’s students for free education. It is a service, like other services, that societies must have for their wellbeing, for individuals to reach their fullest creative potential and to enhance their ability to serve.

The problem is that there is no such thing as free education. It has to be paid for somehow. The question is: how?

The 0% fee increase that has been imposed on the universities has dire consequences for the future of our already cash-strapped institutions.

Let’s be clear about a few facts. One: it’s well established that our higher education system is seriously underfunded. Two: tuition fees have been increasing at rates above inflation only to compensate for the steadily declining government subsidy per full-time equivalent student. Three: we have seriously undermined institutional autonomy, one of the strongest and most vital tenets of our higher education system.

Higher Education Minister Blade Nzimande’s key instrument to address the access issue is the National Student Financial Aid Scheme (NSFAS). It does not work for our students and our context. Over the years, the scheme has distributed a staggering R46?billion to students in the form of loans. This money will not be recouped. The system leaves students stranded and it is inefficient, notwithstanding gallant attempts by the chief executive, Msulwa Daca, and his team to improve it. NSFAS distributes R9?billion to R10?billion a year and this student debt will escalate at ferocious levels in the next three to five years. In the US, student debt now sits at a staggering $1.2?trillion, second only to mortgage debt.

It is not difficult to see that our higher education system is in a serious crisis. Why we have not addressed this in the past 21 years is a mystery as great as the magic behind Harry Potter’s Hogwarts.

The outcome of Friday’s meeting between President Jacob Zuma, student leaders and university leaders has to be understood to mean that the return to a student fee regime is impossible. A new funding system is needed.

We must begin with the idea that education is central to the human rights and social justice agendas of our post-apartheid future. Already, most students are from families that cannot afford fees.

What would a new funding system for universities look like?

Higher education is primarily a public good. Society gets benefits from young individuals participating in university education: it plays a role in nation-building, in strengthening democracy, in producing new generations of intellectuals, in the economy, in generating new knowledge about ourselves and our context, in strengthening our roles in the global community and, most importantly, in contributing to improving South Africans’ quality of life.

It is central to the imagination of the “new” South Africa and so its costs ought to be covered through the national fiscus by the addition of a tax on all South Africans to cover the full cost of studies. This is one way to arrive at a fee-free higher education system.

Higher education is a private good as well. Study after study shows that people with tertiary qualifications are much more likely to be employed than those without, and they earn more.

One way to address this is by charging fees, like we currently do. This favours the wealthy and inequalities are likely to deepen. NSFAS does not help because it does not work for the poor. So we could design a mix: a general tax for education and a graduate tax for those who complete a higher education qualification. This is a slightly different way to arrive at a fee-free higher education system that takes into account the benefits obtained by those who have a qualification.

The state will determine, as it does now, how many places there are in universities for new entrants and in which programmes. These will be distributed among the institutions of higher learning and they will be fully funded through the fiscus.

In one fell swoop, we will have addressed the removal of complex fee collecting systems at each institution and the eradication of student debt. We will have led NSFAS into early retirement and opened the doors of learning to all who qualify to be in the system, irrespective of which social stratum they are from.

Students will focus on their studies instead of being harassed by the danger of financial exclusion. As we do now, we would ensure that the distribution of places would address the country’s class, race and gender imbalances.

I support the students’ call for a fee-free higher education system.

Protests by local suppliers have delayed PPE delivery, which according to the DBE, is one of the reasons the reopening of schools has been pushed back until June 8
Read more
Advertising
Continue to the category
Business