#FeesMustFall: Lessons in speeding up change 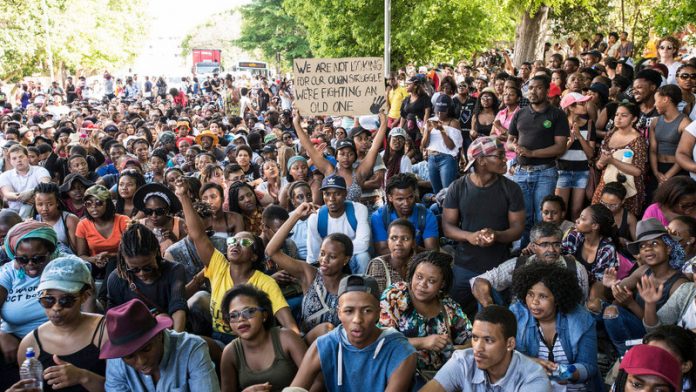 If there is one thing the #FeesMustFall movement shows us, it was that our political parties need to up their game. The movement joined a long line of protests in South African history,

and made the greatest impact, as far as results were concerned. How did the students school the politicians? We take a look at the main lessons.

Identify divisions
#FeesMustFall has not been without divisions. But there have been encouraging signs that, where these emerged, the movement quickly sought to stamp them out.

Recall the Mangaung conference of 2012, when the ANC re-elected Jacob Zuma as its president. The conference also gave birth to the term “organisational renewal”, as the ANC candidly identified problems in its ranks and vowed to “self-correct”. Three years later, we’re still waiting.

Then there’s the Democratic Alliance, who denied there were internal divisions over race until they began to emerge in the media.

But #FeesMustFall saw early on that gender and race politics were not just potentially divisive but also central to their struggle. To be successful, the movement had to tackle race, gender and class.

From the moment male leaders were quoted in the media as leading the movement, students saw patriarchy for what it was and actively put women leaders in the foreground. The passages of buildings in the University of the Witwatersrand are still decorated with the word “mbokodo”, which means “the stone that grinds”, a reminder of how women led the movement. The hashtag, #MbokodoLeads was used to identify patriarchy online, and to stamp it out.

As for race, #FeesMustFall knew that privilege was at the epicentre of the debate about financial exclusion from universities. This was demonstrated powerfully when white students were asked to form a chain around black students as the threat of police violence loomed. Black students were more likely to be shot, and the movement did not need a discussion document to demonstrate how keenly they knew this.

Choose the right target
When the DA marched on Cosatu House in 2012, it did so because the trade union federation opposed the implementation of a youth wage subsidy. The DA wanted the subsidy implemented, and blamed Cosatu’s opposition to it for spiralling youth unemployment.

But as Zweli Mkhize, then-premier of KwaZulu-Natal and the current treasurer general of the ANC predicted, it was not up to Cosatu. Writing for PoliticsWeb, Mkhize said the ANC supported the youth wage subsidy, and it was implemented in 2014, despite Cosatu’s objections.

So the march turned into a bloody clash between supporters of the opposing groups, with the issue of youth unemployment was cast aside.

No one blamed the DA’s choice of Cosatu House as the reason for the violence but it showed that it had chosen the wrong pressure point, and the march seemed to have little bearing on whether the subsidy was implemented at all.

Many criticised #FeesMustFall for targeting the vice-chancellors, when it was government subsidies to universities that were falling. But university management had upped the fees, which put it squarely at the centre of the conversation.

It showed an acknowledgment that members of the private and public sectors were responsible for high university fees.

The protest resonated throughout academia, and the sheer scale of the protests helped to galvanise not only students but also lecturers and civil society movements.

The mass appeal of the movement was aided because, although the students stopped political parties from jumping on the bandwagon, they did not turn away other support for their cause.

Think of the ANC Youth League’s march for economic freedom in 2011. It was led by Julius Malema, the league’s erstwhile president.

By all accounts, it was a peaceful march to the Union Buildings demanding the nationalisation of mines, the expropriation of land without compensation, and, wait for it, free education.

“We are not marching against this government. They have been doing a good job, but we want them to do more,” Malema reportedly said. A militant call if ever there was one.

Four years later, and none of these demands has been acceded to.

Senate House at Wits University, now renamed Solomon Mahlangu House by the students, is where the #FeesMustFall protests began.

One of the banners now hanging there reads, “Feed the revolution, keep the momentum”.

#FeesMustFall achieved momentum which resulted in its first demand, no fee increases for 2016, quickly acceded to.

You don’t need a figurehead
From Malema to the former general secretary of Cosatu, Zwelinzima Vavi, a feature of all protests has been the leadership by a politician-cum-celebrity. Perhaps for reasons of publicity, perhaps for reasons of hero-worshipping, the need for a saviour has stalled many protests.

#FeesMustFall was led by a collective. Its leaders were identifiable, and given credit, but they did not drown out the voices of the thousands of students who were protesting.

This allowed for communication with the media to be decentralised, so a variety of voices could be heard. The scope of the dissent was well communicated as a result.

Twitter is not just for hashtags
If previous protests are anything to go by, the revolution will not be hashtagged. #CorruptionMarch trended, but corruption remains. #StopCrime abounds on Twitter, but criminals don’t seem to pay much attention.

But #FeesMustFall trended and fee increases were stopped. Education is not yet free, but a tangible goal was achieved.

Social media was not used by the students just to communicate, but also as an integral part of mobilisation.

The internet became the go-to source for everything, from where marches would take place to legal advice for arrested students.

Behold the Great March Against Eskom of 2015, when the ANC marched on the power utility over electricity cuts in Soweto. An unmemorable moment if ever there was one, with little outcome achieved, but a helluva publicity campaign before a single “tekkie” hit the dust.

#FeesMustFall relied on ground-up democracy, and real and widespread grievances for fuel, and didn’t need the media to legitimise their movement.

Until divisions at Wits began to show this week, on the whole, student leaders took their cue from students. This meant students were the first ones to know about developments, and not the media.