Mining tests the spirit of the Kalahari 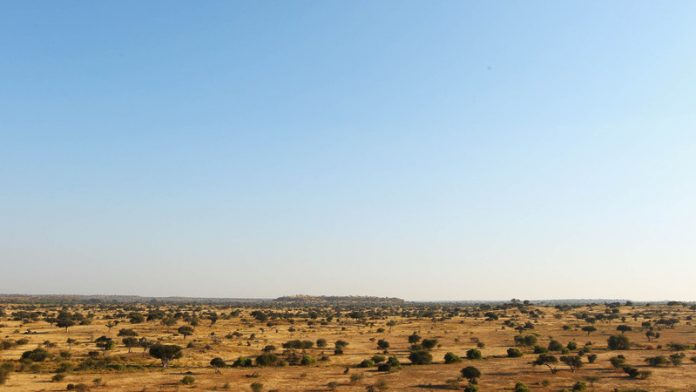 “I love Tupac. He didn’t care if people called him ‘nigger’ and put him down. He told the truth and he spoke about his community.”

The words are delivered with an American inflection, but the man speaking is from the San community in the Central Kalahari Game Reserve – or Tswana Basarwa as some call themselves.

His love of Tupac and the seductions of American culture have not crowded out his traditional identity. But recent ominous moves by the government of Botswana threaten to do just that, as hydraulic fracturing – or fracking – for natural gas moves into the Kalahari.

His love of Tupac took him out of the park for school and a brief stint on that country’s version of the reality television show Idols. He abandoned the rapping dream because he could not make ends meet. But ever-present headphones, their cable winding down to the cellphone in the pocket of his well-worn jeans, continually play rap. He also walks with the assured swagger and shoulder movements of the long-dead cult hero.

“Black Americans in movies and rappers taught me that you have to speak out when people abuse you.”

The defiant look on his face is constantly interrupted by darting looks into the bush. Doing an interview in the Kalahari – or talking to foreigners about your problems – is a dangerous activity for the few dozen San still living in their ancestral homeland.

Taking a photo of him is impossible: “If my photo goes out, they might take me into the bush and shoot me. But our story has to be told.” The “they” are a quasi-paramilitary security force that the Botswana government is said to have deployed in the park to allegedly rough up any San who insist on staying in the Kalahari reserve.

Since 1997, the state has tried on several occasions to remove everyone to settlements in buffer zones outside the park.

Hunting in the park was also recently banned. “This is our home,” he says. But we cannot live here. There is no food and no water.”

Botswana’s Kalahari San, long hounded by the government, are facing yet another eviction, this time to pave the way for methane gas exploration. (Stephane de Sakutin, AFP)

The pressure has made hanging on to an increasingly hybrid identity almost impossible. Most of the San the Mail & Guardian spoke to in the Central Kalahari live outside the park most of the time. They return to the domed homes built from thick acacia branches for family meetings. For the few who stay, the only lifeline is down the heavily sanded roads, in battered bakkies that can bring in enough water and food for a month.

Since 1997 the government has refused to provide basic services to anyone in the park, arguing that it is impractical and at odds with the task of conservation. Botswana earns billions from its wildlife.

The San here are faced with having to leave their home for the well-serviced towns outside the park so they can get an education and find jobs. Those jobs mean an income, to pay for petrol and food to take to those that stay in the park. This inevitably means working for the mines that are encroaching on the Central Kalahari park – such as the large Gope diamond mine that was opened last year.

That mining is public. But various San and Batswana people told the M&G that people are being moved out of the park to make way for more exotic kinds of mineral exploration – specifically, coalbed methane. This is a less intrusive form of fracking, where gas deposits below the ground are brought to the surface under pressure.

To date, few public pronouncements have been made on such plans. But recently the government announced a massive ramping up of its gas infrastructure outside Francistown, in the middle of Botswana’s north-south corridor. These plans are telling because the nearest existing gas fields in the region are in Mozambique, more than a thousand kilometres away.

A map on the minerals department’s website shows that large-scale prospecting rights were granted to dozens of companies for mining throughout Botswana, including in areas that are protected parks.

The San say the government is removing them so they do not have to be consulted on the use of what has been their land for thousands of years. A pamphlet at the Central Kalahari gate gives a nod to this tenure, saying the park was formed to ensure there was land for the San in a newly democratic Botswana.

“It is obvious that they want us out of the way so they can dig up the resources that have always been under our feet.” The speaker, an unusually tall and thin San man, is wearing the striped blue, white and black shirt of Botswana’s national football team, the Zebras. He knows the whole team, past and present. Football gives him common ground when talking to people from Botswana’s main ethnic group, who speak Tswana. But he insists that he is a Motswana – a citizen of Botswana – regardless of how his country treats the San.

“We are not treated like Batswana. We are outsiders and the government does not care about us.” Political representation is limited for the San, who make up 3% of the population, but in recent years representatives from the new settlements around the Central Kalahari have started running for public office. A handful have succeeded, and have become vocal proponents of equal rights.

This is the long game, says the man in the football shirt; in the short term everything is about making pragmatic decisions to ensure survival. Having worked on cars on the haphazard trips into the Central Kalahari to deliver water, he works as a bush mechanic in one of the settlements established outside the park. He is saving up to take a heavy-duty truck licence exam so he can drive the massive yellow trucks working at the Gope diamond mine. “It is the one job we can get that pays well.”

The mine came into being without much public consultation, say the San who the M&G talks to. In 2000 the country’s energy and minerals minister was quoted, while addressing the Ghanzi district municipality to the north-west of the park, as saying: “Relocation of Basarwa [San] communities is to pave the way for the proposed Gope diamond mine.”

Two years later, the government answered questions about the proposed mine by saying it had “no plans to mine anywhere inside the reserve”.

The scattered government position has been met with a controlled one from groups representing the San. When people talk to the M&G, they slip into giving quotes that seem well rehearsed and rehashed.

This has splashed the faces of selected San across billboards and televisions around the world, but most do not have the protection that this celebrity status affords. After talking past the quotable quotes, many San people tell the M&G of a constant fear – of both the state and of losing their identity.

One old man, leaning heavily on his thick walking stick, says the “young generation” are abandoning their identity.

“This is our home; we understand its rhythm.” Maintaining piercing eye contact as he speaks, the man talks about the surrounding bushveld as a larder of medicine and food. “Some of the young people are learning our ways. But most do not want to learn – they are more interested in what happens in television soapies.”

For some, home is where the court battle is

Botswana’s high court has a long history of being at odds with the administration. The San have used legal resources supplied by sympathetic groups to great effect to challenge their eviction from their ancestral land. After sustained forced removals in 1997 and 2002, a court application was launched in 2004. A ruling two years later found that these had been both “unlawful and unconstitutional”. The high court also ruled that the San had a right to live, hunt and gather inside the Central Kalahari Game Reserve.

By most accounts, the government has stuck to the strictest possible interpretation of this ruling and has not looked to the spirit of the ruling. It has mostly stopped forcefully removing people. But it has stopped providing water to people living in the Central Kalahari – something that was recently taken to court and ruled to be illegal. People born or living outside the park can now only enter it after applying for permits.

The M&G has seen some of these, which give people a deadline by which they must leave. It means that San people born outside the park can never choose to return to what they see as their ancestral home. The state has also barred entry to the lawyer representing the San in their previous court victories.

This story was made possible with the help of the Open Society Initiative of Southern Africa and the Democracy Works Foundation.