History is our school’s power tool 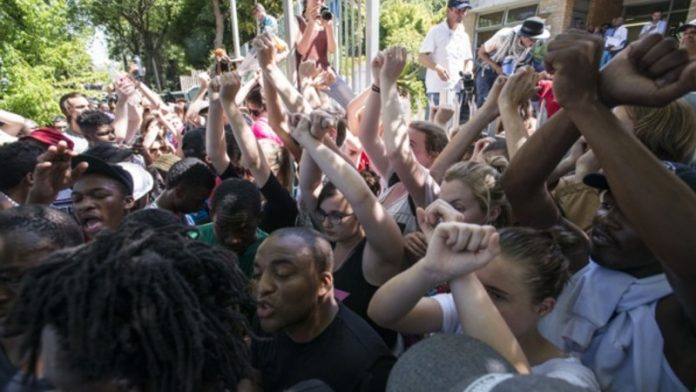 I got this message last Friday evening: “We won. I was at today’s protest, and never have I been so proud to be part of the South African youth … I just wanted to say thank you so much for four years of history at [school]. Even as teargas was searing my throat and I could hear rubber bullets being fired, even as police vans chased after us, even as people fell around me, the inspiration from those lessons carried me through today.”

I never expected to receive a message like this. I was awed. I am so grateful to this young woman. Teachers teach because we want to inspire and share our passions. We have to believe that we do make a difference, but rarely is this ever confirmed. When news reaches us we hold on to it, treasure it. We are inspired to keep going.

I was becoming cynical. This young adult, making her own decisions to act and be part of something bigger than herself, has reignited the fight in me. I struggled with myself about whether to write this piece or not.

My link to the #FeesMustFall protest is tenuous at best. I did not go out to march with the students and on the second day of the protests, I did not suspend my lecture but continued as students banged on the  doors outside. This was not my march. I was not there. Despite this, in one small way, I did play a role by inspiring one student to act on what she stands for.

I am not trying to detract from the students’ achievements by accounting for their actions through examining their early influences. The students have achieved something incredible by their own volition and I respect their tenacity, spirit  and courage.

Yet I would be lying if I denied that I hadn’t thought about the role their teachers might have played in their lives up to this point.  Finding out that one of my hundreds of students did, indeed, draw inspiration from my lessons is affirming and humbling.

For at least one person out there, history is a subject that influenced their decision and actions in the #FeesMustFall protest. How many other students were inspired by high school history?

Many aren’t aware that the department of basic education is considering introducing history as a compulsory subject. Last year Minister Angie Motshekga spewed some rubbish about the possible benefits of history as a compulsory subject including “contributing to nation-building, national pride, patriotism, social cohesion and cultural heritage”. Mash those words together and you get “government propaganda”.

Studying history is dangerous. The uninformed think it’s about learning facts and knowing specific dates. History is about critical thinking and questioning everything, including yourself. It’s about re-evaluating your perspective, identity, prejudices and loyalties.  History is learning about society as it is, not what idealists want it to be.

At the same time, history is learning about people who envisioned a  different world and their failures and victories.

History is a subject  that empowers. That’s why autocratic governments fear it and try to  control it. History must be approached with care and its study needs to be facilitated by competent history teachers. It can too easily become a state weapon to brainwash our nation.

Unfortunately, not all people who teach history are history teachers. Someone who teaches pupils to regurgitate facts without discussing their significance is a drill sergeant. Someone who enforces a political agenda without allowing robust, honest, fact-based class debates is a politician. Someone who teaches a sanitised, edited version of history, veering away from any controversial topic is a sellout.

If history becomes compulsory until matric, there will probably be many students exposed to drill sergeants, politicians and sellouts for a period beyond their junior years. But more pupils will also be exposed to real teachers.  A side effect of learning history is that it can inspire critical citizenship.

Perhaps this is what my former pupil referred to. I’m talking about active, engaged citizenship where individuals challenge the status quo because they recognise the role they play in creating political change. They have come across countless examples while studying history.

My teaching subject got to me. It got to at least one of my former pupils. How many other protesting students were affected by their high school history lessons?  There are experienced, committed and inspiring history teachers who have been teaching large classes in difficult circumstances for decades. They must have left a mark on thousands of people, some of whom, surely, took part in the protest.

I do not want to see history as a compulsory subject because it should not be taught to enhance national pride or patriotism. However, should that happen, what my former pupil’s message brought me was hope about the role history can play in young South Africans’ lives.

I’m issuing a warning to our government: You want to brainwash young people and create a docile nation? It’s not going to work. The youth sees your propaganda, and raises you one #FeesMustFall protest. Your move.