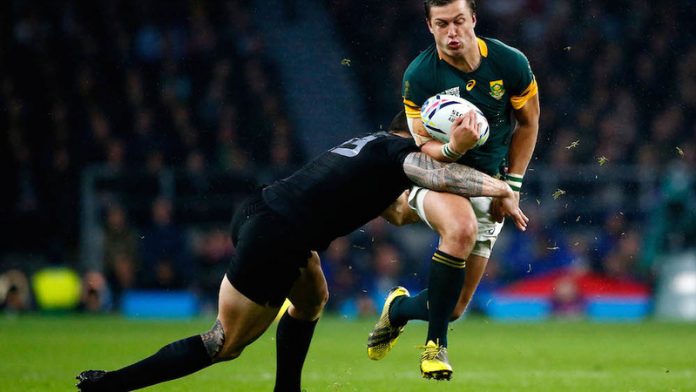 The South African Rugby Union insists that it will wait until its executive meeting in December to either fire or re-hire Heyneke Meyer as Springbok coach. A host of players may or may not announce their international retirement after Friday’s bronze medal match against Argentina. But since Victor Matfield and Fourie du Preez retired in New Zealand four years ago, it scarcely matters. Nobody is saying anything.

In the short term there is a game to be played. South Africa’s only previous appearance in the bronze medal match was at the Millennium Stadium in 1999. It was an occasion of numbing tedium, one which the SA Rugby Annual called, “memorable only for how badly both sides played”.

Breyton Paulse scored the only try, using soccer skills to outwit the All Black defence. Quite the opposite of last week’s visceral encounter, then, although it should be noted that Nick Mallett’s side were, Paulse’s effort notwithstanding, far happier with ball in hand than the one that lost last week’s semifinal.

One statistic stands out in particular. The 22-18 win by the 1999 Boks was the 54th meeting between the two old rivals. At that stage New Zealand led the series 26-25 with three matches drawn. Sixteen years on, the All Blacks lead the series 53-35. Thus, since the new century dawned, the sides have met a further 37 times, of which the All Blacks have won 27, the Boks just 10. The Springboks average a win about every fourth game. Not much of a rivalry, you might argue.

Springbok aura
The sad fact of the matter is that, despite what they say in public, the players know they are likely to be on a hiding to nothing against the All Blacks. It is vital, therefore, to make sure that every other team in the world can be beaten on a regular basis. If that is not to be the case, the Springbok aura is not going to last.

The Bok record this year is won five, lost five. If you extend back to September last year, it reads won nine, lost nine. During that time the team has lost to Japan and Argentina for the first time in its history and to Wales for the second time. The wins include World Cup encounters against the USA and Samoa and a fairly perfunctory run out against a World XV in Cape Town.

It is scarcely credible, then, that anyone in the current squad could possibly look upon Friday’s match against Argentina as unimportant. In the greater scheme of things, it will be the last match the Springboks play until June next year. For players such as Matfield, Schalk Burger, Jannie du Plessis and Bryan Habana it could be the end as Test match players.

One thing it will not be is a benefit match. Argentina know they did not do themselves justice against Australia last week. They will be desperate to prove that 2015 was not just another flash in the pan for the Pumas, but rather the year in which it all came together for them.

The future is set up for more success, with the Argentine side that plays in the expanded Super Rugby competition in 2016 likely to be close to Test strength. Uniquely among the Southern hemisphere nations, Argentina’s best players will get to hone their skills together on a weekly basis in a competition that someone else is paying for. They are in the process of going from outsiders to favourites almost overnight.

To match the Pumas, the Springboks need to remember why it is that they play the game. Assuredly it is not to be tackling machines as it was for much of the match against New Zealand last week.

Living off crumbs
Handré Pollard is potentially the best flyhalf this country has ever produced, but at Twickenham he scarcely ever received the ball in the flyhalf channel. That role was given to Burger, while Pollard was expected to live off crumbs, tackle and kick his goals, all tasks he accomplished with a certain amount of aplomb.

If both sides play to their strengths it could be a great game of rugby, an adornment to a tournament that has featured more than its fair share. Indeed, if it is to be the last game in charge for Meyer, his players owe him a good send off, along the lines of the 61-22 defeat of Australia in 1997 that brought the curtain down on Carel du Plessis’ brief time in charge.

Meyer is not a bad man or a bad coach, but the pressures unique to the job have worn him down. It might be said that he was his own worst enemy, insisting from day one that the result of a Test match was of paramount importance to the South African public.

For Friday’s game the same fear of defeat was evident when he said: “This is a critical match for us and we owe it to ourselves and our supporters to end the season on a high note.”

In retrospect he may feel he should have relied less on experience and more on the exuberance of youth. Certainly he should feel that his teams ought to have been less white.

Ultimately, however, if this is to be his last game in charge, he should be empowering his team to be far more than the one dimensional unit we saw last week, one that is far more reflective of its vast talent.