Entertainment news: Cassper Nyovest fills up the dome and Hlubi gets married 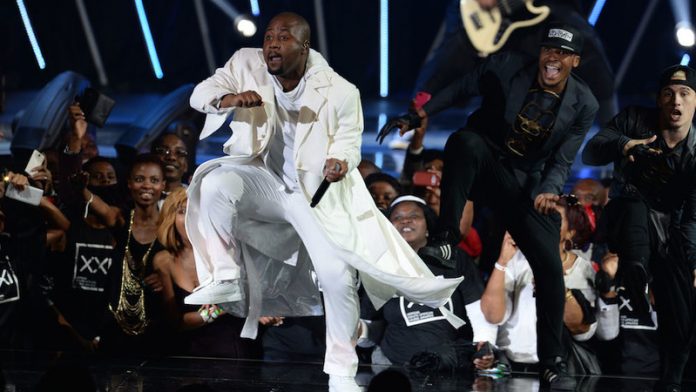 Motswako rapper Cassper Nyovest filled up the dome as he said he would this past Saturday, becoming the first South African artist to do so without the help of an international act. While Cassper celebrated  the “peace” in the building, posting pictures showing Oskido, the self-styled Fleek-ile Mbaweezy and Julius Malema …

So much history was made last night!!! So much peace was in the building !!!! It’s bigger than me!! #FillUpTheDome pic.twitter.com/zCgqat7cWE

Cassper fans couldn’t help but bring AKA into things

@CassperNyovest if u luk closely thts aka filling up the goal post pic.twitter.com/tb5wax4Lz0

It was congratulations all around for Cassper, from the Presidency to Trevor Noah, who rehashed his Leonard Chuene/ Castor Semenya joke, tweeting …

Cassper took his moment in the spotlight to tweet about the success of his second album Refiloe, about which he said: “Oh Yeah, Uhhm. My second album went gold in three hours. It’ll also be in stores next week. Enjoy.”
The artist also announced that next year he plans to fill up Orlando Stadium.

Hlubi Mboya married boyfriend Kirsten Arnold this weekend in a “traditional Xhosa ceremony with a Scottish touch,” the Sunday World reported on Sunday.

Arnold wore a kilt with a jacket and tie outfit while Mboya wore a Xhosa outfit with a layered headwrap.

It seems it all went according to plan, as earlier this year she had told The Juice: “I’m a Hlubi so I really feel most beautiful when I am truly in the space of my clan, my tribe and my people,” she said.

Black Coffee’s album Pieces Of Me has been certified platinum, with his record label Universal Music announcing the achievement at a showcase event on Thursday.

The platinum sales happened a month and a half after its release and went gold only two weeks ago. According to celebrity news website The Juice, the label is forecasting that the album will reach double platinum sales by the end of this year.

Last month, when the album went gold, Black Coffee announced that he would make minor adjustments to it and then re-release it internationally, in the hopes of it winning the Grammy.

United States hip-hop and soul star Erykah Badu premiered her one-woman show, Live Nudity, in Dallas, over the weekend. The show, which she directed, ran for three days at the Black Academy of Arts and Letters as part of the “dress performance series”. In the show, she performs with sock puppets in a Rosie Perez accent, eating a bag of potato chips, Pitchfork reported.

In a review of the show, the Dallas Observer quoted her saying it is “just me making this shit up right now”. The Dallas Observer described the show as more like a “sloppy dress rehearsal for something that might turn into something better later on.”

Badu has a number of gigs planned for later this year and 2016. She recently released a remix of Drake’s latest single Hotline Bling, which she entitled Hotline Bling But U Caint Use My Phone. Her fans can expect more material from the singer, as it’s being reported that she will be releasing a new mixtape this month, entitled But You Caint Use My Phone, a reference to her 1997 anthem, Tyrone. She will also host the 2015 Soul Train Awards on November 29 on BET.

Taylor Swift gets sued for $42 million

A screengrab of Taylor Swift’s Shakle It Off.

Singer Taylor Swift is being sued for $42-million by US R&B singer Jesse Graham for allegedly stealing lyrics to the latter’s song Haters Gone Hate. The BBC reported that besides money, Graham was seeking for his name to be added as a writer to the credits of the track.

Swift’s representatives did not legally comment on the claims. Swift’s song reached number two in the UK and the video of the song was watched more than 1.1 billion times on YouTube.

The songs have similar choruses, using similar terminology, about which Graham said, “Her hook is the same hook as mine. If I didn’t write the song Haters Gone Hate, there wouldn’t be a song called Shake It Off.”