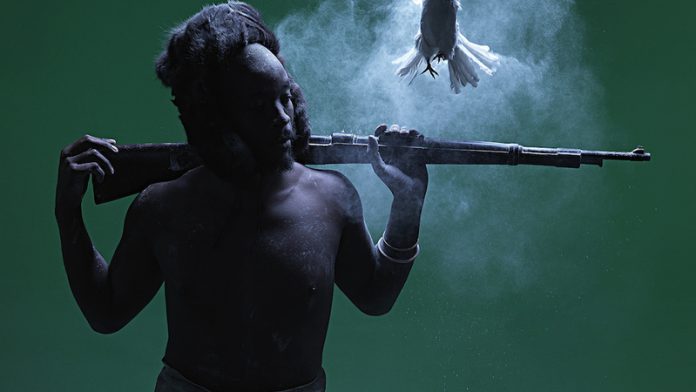 Carefully thought out, thematic work is a staple of multi-disciplinary artist Mohau Modisakeng’s oeuvre. The recent winner of the Standard Bank Young Artist Award in the visual art category plans to use his funds to create a travelling exhibition that will include installation and performance elements.

“It will start in Grahamstown [at next year’s National Arts Festival], but I think the work will change as I move around with different spaces,” says Modisakeng. “I like to respond to the different spaces where the work will be shown.  So the performance part of the exhibition will evolve as it goes and the photography and the video will probably remain the same.”

Expanding on the presentation of the work, Modisakeng says, “it will be a series of photographs. It will include some video as well, which might be shown as projections, but it might also be on monitors. I’ll also be doing a performance and what remains of the performance will be turned into an installation piece where I will also include some sculptures.” This is in step with the artist’s own assertion that his work is moving towards the “theatrical”.

Modisakeng’s exploration of violence, largely using his body was a striking way of looking at the violence of the apartheid era and the early Nineties.

The new work, already in creation, will explore the protest culture in South Africa. “I will be exploring its roots in the anti-apartheid movement but also trying to trace that into the current day,” he says. “So the key themes will be history, landscape and protest.”

Modisakeng is not the only artist exploring multi-disciplinary work. Themba Mbuli, a choreographer and managing director at Unmute Dance Company, which has dancers of mixed abilities, says the work he is developing will feature visual art alongside dance. Mbuli says he is still exploring three possible directions but the work will be a group work involving other members of his company.

Mbuli’s seminal solo work Dark Cell, which explored mental imprisonment through the imagery of Robben Island and political imprisonment was staged at the National Arts Festival in 2014.

For director and designer Jade Bowers, who has been involved in works such as Ashraf Johaardien’s adaptation of K Sello Duiker’s The Quiet Violence of Dreams and the direction, design and production of Salaam Stories (a remake of Johaardien’s Salaam), people do not often acknowledge the immense pressure that comes to bear on artists to produce great work. Bowers says she is taking a month to decide which of the ideas she will go with, but she wants to “tell a story that makes sense to me.”