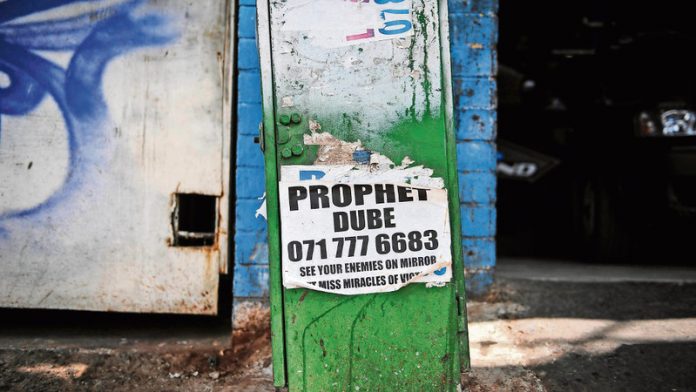 “It is fake, absolute rubbish and just a means to survive in these hard economic times. There is nothing like spiritual power in what we do.” This is the first description I get as I set out to uncover the world of Ugandan sangomas in South Africa.

My guide into this other world is a 26-year-old Ugandan who has lived in Johannesburg for the past five years. He takes me to an opulent house in upmarket Sandton, then tells me to wait in the car while he speaks to the house leader, to determine how I will be presented.

“Well, I have introduced you as a new fellow from Uganda who wants to join the trade and you have come to see where you can operate from,” he says, on his return.

A sangoma, according to the national co-ordinator of the Traditional Healers’ Organisation, Phepsile Maseko, is someone who applies African philosophy to heal the body, mind and soul.

“We are aware that there are many people out there disguising as sangomas, tainting this noble practice of our ancestors,” says Maseko.

Indeed, from what I am about to find out, the practice in Sandton is far from a healing process.

Inside the house are 10 young men, who watch me sceptically through sleep-deprived eyes. But as I am in the company of the house leader, who is referred to as musawo (a Ugandan term for a doctor), they force smiles.

Apparently, this house operates as a divination centre. Clients have to contribute a percentage of their earnings to cover the house’s monthly rent of R25 000 and other bills.

There is something of a stereotype among Ugandans that all their compatriots in South Africa are sangomas and are referred to as such on visits home. This may not be accurate but from my guide’s admission it’s a trade many have opted for.

“The sangomas are in town,” the local partygoers say, and many young, desperate Ugandans are enticed to follow this road to riches.

They seem to live flamboyantly: they drive the latest cars, stay in the affluent suburbs of Kampala and run the city’s night life for the few weeks they are in town.

Back in South Africa, many fine-looking sangomas do not live any differently. Every evening they gather at the home of one of their peers and party until the early hours.

Back at the divination centre in Sandton, the house leader takes me to a small room attached to the main house that is decorated with animal skins, bark cloth, calabashes, animal skeletons, bones and a number of small transparent bottles containing unidentified liquids.

He walks me through the basics of the process of spiritual healing, detailing the well-crafted steps, a ploy that one perfects with practise.

“You have to act the part from the tone of your voice to the outfit you wear,” he says. “Covering yourself with an animal skin and wearing a string of snail shells around your head always does the trick.”

The client, he emphasises, has to put at least R500 in a basket before the healing process starts. This covers the consultation fee but also serves to invite the spirits.

In the dimly lit room unrecognisable voices start streaming in. These are usually played from a hidden device and are meant to convey the presence of spirits in the room.

Depending on the client and whether they know Ugandan languages, the sangoma will switch to one of the many Ugandan dialects and start blurting unintelligible words. This, the client is told, is how the spiritualist speaks to the gods. The client is then motioned to speak to the spirits directly, explaining his or her problems.

There are preset answers for every common problem, he says: lost lover, lack of a job, nightmares, business success, rekindling love in marriages, favour at work and success in political campaigns – the latter usually being the most costly service on offer.

The key, the house leader explains, is to prescribe highly unlikely conditions the client has to meet for success, so that failure – the usual outcome – can be blamed on the client who cannot follow the rules.

“If you tell a client not to speak to their wife or husband for 24 hours yet you know they live together, chances are that they will fail.”

He explains this trade is about understanding what clients want to hear, and that’s what you give them. If coincidence works in favour of the sangoma, he takes the credit. If not, the client is blamed.

The fees charged vary, depending on the client. Those with flashy cars and obvious belief are charged more.

“The fees range from R10 000 upwards and can be as high as R1-million, especially when dealing with politicians and business people,” he says.

“When I arrived in Johannesburg from Uganda, I didn’t have anywhere to start from and the first Ugandans I met were sangomas, so I joined for survival,” the house leader says.

Now, however, he is comfortable in his trade and has no intention of moving into anything less cynical.

With a few simple lessons I, too, was declared a sangoma by my new compatriots.

This, says Maseko, is impossible because it takes a minimum of three months to qualify as a sangoma.

“A sangoma doesn’t use magic and we operate according to the 2007 Act on traditional healers. Anything outside that is illegal,” she says.

“The moment someone leads you to a dark room or asks you to give them money and that they are going to multiply it, just know for sure that is a sham.”

The Ugandan high commissioner in South Africa, Julius Peter Moto, says his mission is aware that a number of Ugandans in South Africa defraud people in the guise of spiritual healing.

“We do not condone such activities but, as a commission, our hands are tied. We are not law enforcers. It is challenging [because] such people never register with the commission and can hardly be traced.”

Occasionally, Moto says, the victims of such fraud will approach the high commission, but by that time the perpetrator has typically moved on and cannot be traced.

“Most of these so-called sangomas use fake papers. But more disturbing is that, even after arrest, they will be on the streets the next day,” he says.

Midrand police commander Colonel Steven Moodley believes such fraud is common in various areas, but that many people are not comfortable reporting their experiences to the police.

“Most people are driven to the sangomas out of greed and the desire to get rich faster. So when things don’t work out they choose to mourn silently.”

Back in Sandton, my sangoma tutor tells me to go back home and think of a name I would want to use to work as a sangoma.

He is quite sure that the ground he has trod for the past few years can betray him at any time.

And as a caution to his new recruit, he says: “This is our life; if you are lucky, you make the rands but arrest and deportation is the other likelihood. Welcome to our world.”

Legacy of a lesbian sangoma