JAG puts on show of a lifetime 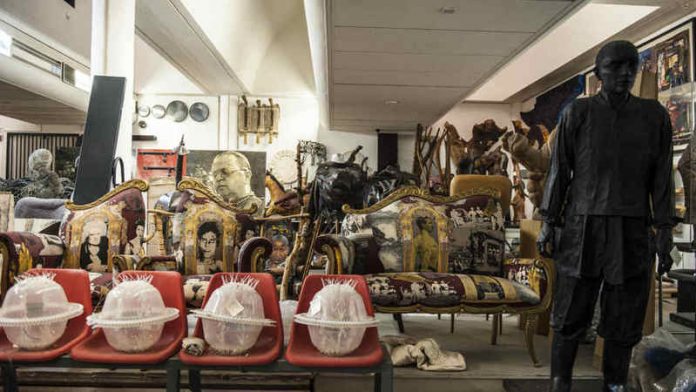 “Anything is possible,” it says in red on the office notice board of the Johannesburg Art Gallery’s (JAG) chief curator, Antoinette Murdoch.

“Sometimes you have to bluff yourself into believing that,” she laughs, referring to parts of her six-and-a-half-year tenure as a trial by fire. The gallery’s 100th anniversary celebrations begin on Tuesday, and not everything will be finished in time.

“There’s an enormous list of things that still need to be done,” she says. “In this financial year, we got R15-million from the Johannesburg City Council,” adding that an additional R50-million has been promised for building renovations in 2017.

“We were advised to prioritise the roof, to get the rain problem sorted.”

She carefully distinguishes between the Lutyens roof, designed by architect Sir Edwin Lutyens, from 1911, and the Meyer Pienaar roof, an extension to the JAG built in 1986.

“The Lutyens building is in a much better state than the Meyer Pienaar, built less than 30 years ago, which leaked from the time it was built. This can only be attributed to the standard of building then and now.”

Chief curator Antoinette Murdoch has the difficult task of guiding the gallery through the turbulence that comes with its position in the rapidly changing city centre. (Photos: Paul Botes, M&G)

With massive sweeping archways and pillars, the Lutyens building has gorgeous herringbone parquet flooring. The space is dramatic, but refined. You want to whisper there.

But from day one, the gallery was an anachronism. A former director of the institution, P Anton Hendriks, is cited by historian Jillian Carman in her history of the collection, Uplifting the Colonial Philistine (2006). Hendriks comments on Johannesburg’s mining town status in 1910, when it was agreed a gallery would be built; he deems it remarkable that, in less than 20 years, the city shifted from being a pioneers’ camp to the home of this building.

Also in 1910, Hugh Lane, one of the art collectors responsible for starting the gallery’s collection, said: “Johannesburg is rapidly losing the reasons for reproach with which the remainder of South Africa has armed itself against this community, and by the establishment of a gallery of modern art in the town, removes forever the stigma that its citizens are concerned with naught else than amassing fortunes.”

Today, the gallery is juxtaposed by the Noord Street taxi rank, arguably one of the city’s busiest. “The area is not fantastic,” Murdoch agrees.

There has been discussion about moving the taxi rank into Joubert Park proper, “but this raises major heritage issues”.

She also speaks about the controversial green fence separating the gallery from the park, erected several years ago. “There are also safety issues. I don’t feel the time is right to remove that fence, in spite of pressure we weather about it.”

Property holders in the area are keen for the gallery to become more of a feature so that it will uplift the area, still filled with Art Deco buildings, many of which have seen better days.

“There are a good amount of stakeholders in the area, but they don’t collaborate. Everyone has a plan – the Johannesburg Development Agency, the economic development unit, the building owners and others all have a plan for the area, but no one works with anyone else.

“A few years ago, the JDA ‘did’ Bok Street. They redid the sidewalk and planted trees, but today it looks like trash again. This happened because there’s no overall plan. Throwing money at a public sculpture here and an installation of trees there has been random and it doesn’t work.

“ Constructure, edited by Tracy Murinik, the book we’re launching at the opening, addresses much of this. Comprising vision essays by each of the gallery’s former directors, from Nel Erasmus to me, the book’s outcome seems to identify a real need to comprehensively identify our audience. People are critical – we had many international shows; some say: Is that really our audience? Why are we putting ourselves internationally on the map, when the children in Joubert Park do not know this is a gallery?”

Gallery attendance is not a meaningful yardstick, Murdoch feels. “According to research by the Visual Arts Network of South Africa, JAG is the best-attended art gallery in Africa, but this is an embarrassingly negligible figure in comparison to international art museums. The demographics are no longer only old white people, the cultural diehards; at least 90% of our visitors are black and young, but this depends on the nature of any given show.

“Many of the outreach programmes, like the Joubert Park Projects and One Square Mile, and Jo Ractliffe and Terry Kurgan’s initiative with street photographers, brought surges of visitors, which phased out after the project’s momentum died. The longevity of projects such as this is never investigated. The bottom line is always money.”

The gallery is supported by the council. “But we also get private funding, which can manifest in kind; Anglo-American offers generous input into growing the collection, and Friends of JAG has been revived by fashion guru Marianne Fassler. She is a firecracker! Friends of JAG, with SA Mint, have issued a set of commemorative sterling silver coins featuring in relief reproductions of work by Eduardo Villa, Bruce Arnott and Dumile Feni, on sale.”

Murdoch’s tenure has stretched over two of the gallery’s centenary celebrations. “The collection was started five years before the building was built and, in 2010, we celebrated 100 years of the collection.”

This milestone next week will be more than just a party. It’s something of a mini-festival. Although not every bit of the grand old dame of the city will have been nipped and tucked, given a whitewash and fixed, there are six concurrent exhibitions featured in the gallery, each showcasing gems, loved elements and almost unknown ones, from its collection, exhibitions to force you to walk through the elegant interstices of Lutyens’s building as you imbibe them.

“Hopefully this project will draw the right kind of attention,” says Murdoch.

She acknowledges how violent or sexual pieces can be draw cards. “We’re playing it safe. We want to appeal to a diverse audience. And I’m not convinced shock works. Beauty is more of a reason to see art.”

The centenary exhibitions are:

At the heart of the gallery

Call it nominative determinism. Call it coincidence. Jo Burger holds Johannesburg’s Art Gallery’s (JAG) heart in her expertise. For the past 20 years, she has been the institution’s librarian.

A librarian by training, she taught the discipline at Goudstad teachers’ college, practised it in a geological library and a medical one, and then the JAG vacancy came her way.

“‘Bring it on!’ I said. Finally this was a professional post I wanted to get my teeth into.” And that is precisely what she did: proactively taking what was an important research tool and elevating it into not only a sacred domain ­– her staff know that if they move one book, she notices – but also arguably into the country’s finest.

“I came to JAG with no knowledge of art,” she says, attributing all she knows to the help of art historian Elza Miles, the JAG’s ad hoc researcher at the time.

The gallery has a collection of books, with a particular focus on African and South African art, and an archive of clippings. It is also the home of the archives of the Federated Union of Black Artists, founded in 1978.

“These primary sources have been called a pot of gold by researchers from as far afield as Yale and Columbia universities. So much of the material is not on Google.

“The library is for reference only. In any institutional library worth its salt, someone in my position is not called a librarian, she would be called a ‘curator of library material and information’.”

She is vehement in her response to the reflection that JAG’s collection is colonialist – “What rubbish!” – and speaks of how young black gallery visitors were recently so taken by a lecture given by art historian Jillian Carman on the Dutch baroque artist Rembrandt that they hugged her.

“I could punch people who dismiss JAG as a colonial institution. JAG is a window into the complexity that brought European culture to Africa. JAG started collecting art by black artists from the late 1930s, long before it was politically fashionable to do so.”