Mmusi Maimane keeps his cool as ethics issue hots up 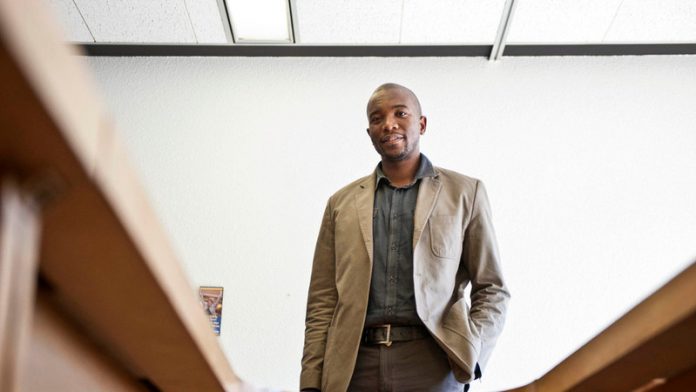 Democratic Alliance leader Mmusi Maimane has, in recent weeks, been putting out fires, from party member Dianne Kohler Barnard’s disciplinary matter to himself failing to declare donations he received during his campaign for the party leadership.

The decision to withdraw Kohler Barnard’s membership appears to have divided the DA. Are you worried this will have a negative effect on the party ahead of 2016’s municipal elections?
There is no division in the DA along factional lines. The DA is in a good space going into next year’s local government elections, with our respective mayoral campaigns in Nelson Mandela Bay and Tshwane generating great momentum.

Is there a reason the recommendations by the party’s federal legal commission – that Kohler Barnard pay a fine, attend a course on using social media and be demoted as spokesperson on police – were not accepted?
In terms of the party’s constitution, the federal executive has the ability to increase, decrease or accept any sanction recommended by the federal legal commission. Aggravating and mitigating circumstances were presented to and discussed by the federal executive. On the basis of the arguments presented, the executive voted to increase the proposed sanction to terminate her membership.

Some DA members have argued that your apology after breaking Parliament’s ethics code and misleading it by not declaring donations was similar to Kohler Barnard’s apology after she reposted a Facebook message praising apartheid president PW Botha’s rule.
The two matters are inherently different. I have not broken the ethics code, nor have I misled Parliament. My office made a grave administrative error, which was swiftly corrected.

In addition, none of the four MPs that ran for leadership positions at the ANC’s national conference in 2012 – Kgalema Motlanthe, Tokyo Sexwale, Paul Mashatile and Fikile Mbalula – declared any campaign contributions. In stark contrast, I have been completely open in disclosing the amount of donations received and the names of the donors to the registrar of interests.

Would you resign if the ethics committee finds you guilty?
I have disclosed the donations received. The late submission was due to a regrettable oversight by my office.