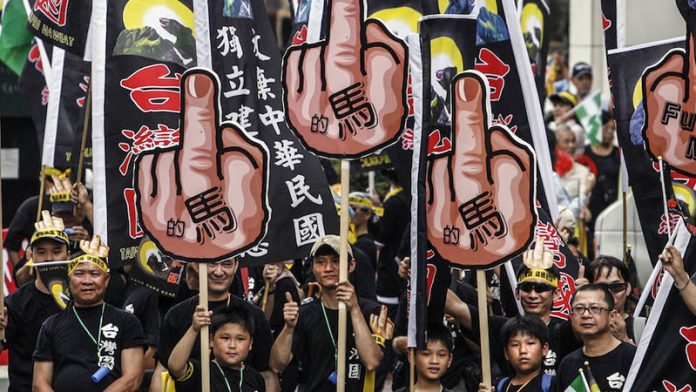 The presidents of China and Taiwan will dine together in Singapore on Saturday in what will be the first meeting of its kind since Chairman Mao Zedong’s communist troops forced their nationalist enemies from the Chinese mainland in 1949.

Zhang Zhijun, a Chinese official responsible for Taiwanese affairs, said the two would “exchange views on promoting the peaceful development of cross-strait relations”.

Beijing still officially considers Taiwan a renegade province that should be reunified with the mainland. But Zhang said the meeting represented “a breakthrough in direct exchange and communication between the two leaders, after hardships and twists since 1949”.

“The two sides across the strait used to have drastic military conflicts and sharp political confrontation,” Zhang added, according to Xinhua, China’s official news agency.

Gerrit van der Wees, editor of political journal Taiwan Communiqué, said the announcement had come as a major surprise. “There was no inkling on any side that this was coming,” he said.

J Michael Cole, a Taipei-based Taiwan expert from the University of Nottingham’s China policy institute, said: “It is certainly now being described as a very historic moment. It’s a first. But do not expect anything substantial to come out of that meeting. It is going to be a photo opp.”

The announcement of the milestone meeting comes as Taiwan gears up for a presidential election on January 16.

Ma, who has overseen an unprecedented and controversial warming of ties with Beijing since taking office in 2008, will step down next year, and his ruling nationalist party (KMT) is currently badly trailing its rivals in the polls.

To Beijing’s dismay, Tsai Ing-wen, the candidate for the pro-independence Democratic Progressive Party (DPP), is widely tipped to become Taiwan’s next president.

Anti-China sentiment is on the rise in Taiwan, and Tsai’s DPP reacted angrily after news of the upcoming meeting emerged on Wednesday.

“I believe people across the country, like me, felt very surprised,” Tsai said on Wednesday. “A meeting of the leaders of the two sides across the strait is a great event, involving the dignity and national interests of Taiwan. But to let the people know in such a hasty and chaotic manner is damaging to Taiwan’s democracy.”

In a statement announcing the Singapore summit, Charles Chen, a spokesperson for Taiwan’s president, said: “The purpose of President Ma’s visit is to secure cross-strait peace and maintain the status quo of the Taiwan Straits.”

But analysts suspect the decision to hold the historic meeting is a bold attempt to influence the outcome of January’s election – both by the KMT, which hopes to hang on to power, and by China’s communist party leaders, who would rather deal with the KMT than with the opposition DPP.

By forcing the issue of cross-strait relations into the presidential race, analysts believe Beijing and the KMT hope to damage the DPP’s chances.

“The KMT has a much longer tradition of meeting with Chinese officials. They have all these back channels and they are perceived as the one party in Taiwan that would avoid war in the Taiwan Strait and that would ensure stability and friendly relations across the Taiwan Strait,” said Cole.

“That could turn into a bit of a rhetorical offensive against Tsai Ing-wen.”

“He wants to salvage his own legacy. He only has seven months to go, his standing in the polls is way down [and] he somehow wants to be seen in history as the person who made the breakthrough with China.”

But he predicted the attempt would backfire, as many Taiwanese are likely to view Ma’s meeting with Xi as “yet another undemocratic move by an unpopular president who is a lame duck and doesn’t really have a mandate any more to negotiate on behalf of Taiwan with China”.

“[They are frustrated] with his policies and the fact that he has been drifting in China’s direction at the expense of freedom and democracy in Taiwan and Taiwan’s sovereignty,” Van der Wees said.

Political scientist Nathan Batto said he believed that Ma, who was re-elected for a second term in 2012, hoped to write his name in the history books by meeting Xi but warned the tactic could backfire.

“Ma might assume that a picture of him shaking hands with Xi will be a powerful image for KMT campaign ads, but I suspect he is misjudging the electorate,” he wrote on his blog.

Experts said geopolitics also appeared to have played a role in Ma’s decision to meet with Xi.

Cole, who is also the editor of the blog Thinking Taiwan, said, with tensions rising in the South China Sea because of Beijing’s controversial island-building campaign, China appeared to be attempting to “calm things down” in the region.

He pointed to Chinese premier Li Keqiang’s recent visit to Seoul and Xi’s upcoming trip to Vietnam as examples of those attempts.

“[The Singapore meeting] could very well be part of that charm offensive on Beijing’s part,” Cole said. “To me this demonstrates that China has reached a point where they realise that simply buildings islets and airstrips in the South China Sea and at the same time saying ‘Our intentions are peaceful’ will only go so far. At some point you need to start doing things that are a bit more concrete to reassure your partners.” – © Guardian News & Media 2015