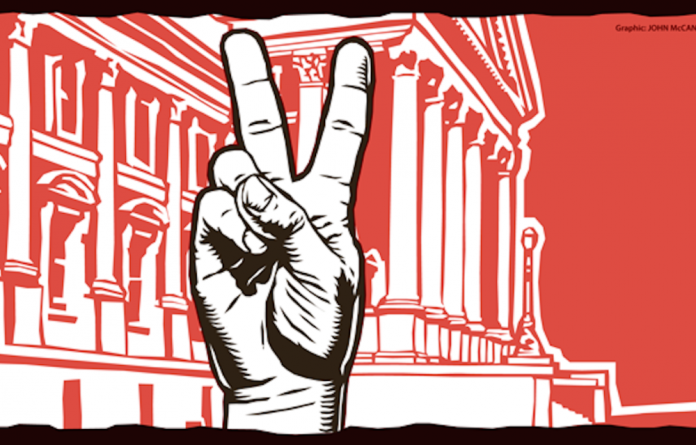 Make no mistake: it was a big political moment. For the first time in modern, democratic South Africa, citizen protest compelled the government to respond and act. There have been significant U-turns before – the deathly slow introduction of antiretroviral drugs and the youth employment subsidy spring to mind – but they have taken years, not days.

The student protest movement did what many others around the world that have adorned the history of political dissent have done: acted as a touchstone for a range of fundamentally important social issues. As such, it had a profoundly polycentric character and it was therefore hard to escape the conclusion that the student movement has stepped into the political void that the end of trade union federation Cosatu has left.

Just as the “old” Cosatu had the capacity to see beyond the immediate issues of worker rights to the surrounding socioeconomic context, and to join the dots between the two, so too did the student movement link the unicentric demand that “fees must fall” to the broader demands for social justice such as those of outsourced workers, and access to economic opportunity more generally.

The multiclass and multiracial character of the movement, combined with its national sweep, surprised many. It certainly startled an unprepared government: the police reacted in the crude, heavy-handed fashion that unfortunately we have come to expect, notwithstanding the painful lessons of the Marikana massacre.

But what does it mean for the future? Is it part of a revolutionary uprising? Will South Africa now encounter its own Arab Spring?

No. Not as such. But it is a crucial part of the sea change in the country’s politics that will unfold over the next 24 months – a two-year period that will set the nation’s course for the next generation. Yet, much as it tries to resist, the political establishment will not be able to stand against the wave of change because too many of the key ingredients are beyond its control or have already taken root.

Former president Kgalema Motlanthe described it as a crisis the other day. He is probably right. But it also represents an opportunity, because the outcome is uncertain, with several competing narratives and scenarios that can plausibly be sketched for what lies ahead.

There are five main elements that together constitute a perfect storm for this country. First, and perhaps foremost, there is the fiscal cliff that South Africa is fast approaching. Even though departments are cutting left, right and centre with an urgency and velocity unprecedented in democratic South Africa, there is an overlying denialism in the state about the depth of the problem.

For the first time since 1994, the country is running out of cash. In time, we will all see the disastrous effects of the public sector wage deal that was struck – at more than 10% – earlier this year. It will come to be seen for what it was: the ruling party looking after its own at the expense of the rest. Because, in short measure, one social interest group after another will face the reality of what less public expenditure means; last month it was universities, but next month it will be something else.

There will come a point in the next two years when the ANC government’s commitment to social welfare grant recipients (now 18?million of them a year), which underpins its electoral prowess, reaches breaking point. If not, something else – something very big – will have to give.

Either way, and this is the second element, protest action will become more widespread. The state’s response is likely to become ever more panic-stricken, and the absence of better policing will simply serve to fuel the anger of protesters and invite more violence and social conflict. Avoiding such a prospect will require calm, one-nation leadership from the top – something that is conspicuous by its absence at present. If only Motlanthe were still in the Union Buildings.

The ANC’s electoral grip will inevitably face unprecedented challenges. And so the third dimension to the political sea change will be next year’s municipal elections. It is now likely that the ANC will, for the first time, lose power or at least be forced below 50% in key places and in its former political heartlands, such as Nelson Mandela Bay, Johannesburg and Tshwane.

For the first time, the ANC will have to contemplate coalitions with opposition parties to maintain its grip on power – I am deliberately ignoring the rather pathetic and short-lived “coalition” between the ANC and the National Party in the Cape just after the turn of the century.

This prediction assumes that the Democratic Alliance and the Economic Freedom Fighters will be able to capitalise on the vulnerability of the ruling party and overcome their own weaknesses in terms of credibility, ideological coherence and the electorate’s underlying suspicion that they cannot really be trusted with government. Nonetheless, coalitions – or at least strategic alliances – between the DA and the EFF are conceivable. Much stranger things have happened in politics.

This shift in electoral fortunes is, in turn, inextricably linked to the fourth factor: the ANC’s own existential crisis and the diminution of its internal democratic integrity.

During the days of the student protest action, the party looked lost – or, at best, schizophrenic. It appeared, as did the government, hopelessly out of touch. It seemed to have lost the capacity to anticipate political trouble and to pre-empt harmful attempts to undermine its credibility and power by organising the sort of social dialogue that was a key strategic capability during the transition to democracy in the early 1990s, and which further underpinned the building a strong social covenant later in that decade.

This is, in major part, an effect of another underlying cause, the fifth factor: the end of the ANC-Cosatu alliance, which for so long acted as a giant sponge at the centre of South Africa’s society, anticipating and absorbing social conflict.

Now, as Motlanthe has pointed out, the alliance – a pale shadow of what it once was – is now one organisation rather than a strategic partnership between three independent ones. (On this point, a read of the full interview with Business Day journalist Sam Mkokeli is well worth the time.)

As the union movement continues to break up, prompting greater uncertainty in industrial relations and further undermining international investor confidence in the country, so ANC hegemony will be further eroded. Some will celebrate this – but one must always be careful about what one wishes for.

To ANC traditionalists such as Motlanthe, this is a painful process of decline; few are willing to acknowledge publicly the depth of the crisis and what it implies. But surely they have only themselves to blame. They failed to stop President Jacob Zuma and his cronies seizing control of the organisation and corrupting its values and tarnishing its reputation.

Unfortunately, the succession battle that has now begun in the ANC will not help. It is likely to be, as before, a major distraction. The past two ANC national conferences (in 2007 and 2012) suggest that succession wars sow more division and factionalism, further disabling the party from providing the leadership it once gave. The road to December 2017 will be a messy and destabilising one, with plenty of collateral damage – especially in government departments.

Indeed, how the ANC responds to the bloody nose of the municipal elections, and the fear of losing more power, is – along with the fiscal cliff – the key political driver of change for the short to middle term.

All is not lost. As Motlanthe said on a previous occasion, sometimes things have to get worse to get better – and the crisis should not be wasted. There is far too much complacency in the public sector and in the ANC. Policymaking is stuck in rut. The student protest movement should be celebrated not just for its vigour and its victory, but for the catalysing, shake-the-place-up wake-up call that it represents.

As a former student noted when I bumped into him at the student protest outside Parliament last month: “You and Pierre de Vos taught us the theory – this is the Constitution in action.”

So, the overriding question is perhaps this: Is it a hinge moment or a fork in the road? A hinge suggests that a door is opening up, with new light and new opportunity to be glimpsed through the crack. A fork in the road suggests that there are very big choices and futures on the immediate horizon.