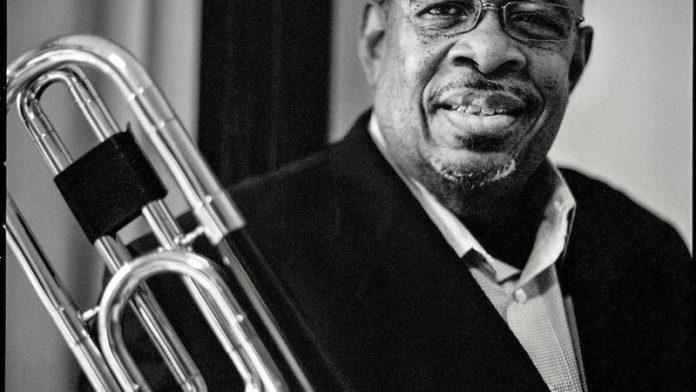 It was a first date for two friends on November 29 last year – they attended the only show Fred Wesley (72), who played trombone in James Brown’s band and who was co-credited with him for inventing funk, did in South Africa. My two friends have been happily together ever since.

I tell Wesley the story in a recent telephonic interview at his home in Manning, South Carolina, in the United States.

So can funk be romantic, I ask.

He laughs a sonorous laugh that builds and then rumbles like a deep, funky bass line. “My one band member also has a relationship with a girl in Johannesburg, ever since we played there,” he says. “So maybe funk can be romantic, for all we know.”

And he laughs that wickedly infectious laugh again.

Wesley is bringing a seven-piece band to South Africa later this month – this time they’ll be playing in Cape Town, Durban and Johannesburg. With the veteran trombonist will be a trumpeter and saxophonist, backed by guitar, piano, bass and drums.

I ask him whether it was difficult to learn the trombone at that age, considering the size of the instrument?

“No, I was taking trumpet lessons, piano lessons … my father had a big band and he told me he needed a trombone in the band. So I picked up the trombone and learned to play it. It wasn’t more difficult than any other instrument.”

Wesley owns six trombones but will only bring one on tour. “I travel light.” Booming laugh.

His custom-made instrument is a fusion of two brands of trombone. “I call it the Frankenstein horn.”

Wesley has been a trombonist for about 60 years: “I feel the trombone with me all the time … like another arm, like another leg – it’s part of me now … it’s like another appendix of mine, you know.”

As one of the pivotal members of James Brown’s band, Wesley was there when the funk revolution was started in the late 1960s – think funk lodestars such as Good Foot, Say It Loud, Hot Pants and so on. But it was not really important for him then. “I was just trying to do my job. I was originally a jazz player.

“Funk came to me with just being with James Brown. James Brown didn’t know much about jazz – he only did music that he felt.

“My first love was jazz. I’ve been known as the architect of funky music, whatever that means. But now I understand it and I live it the same amount – I didn’t realise it at the time, but I now realise my role in funky music.”

Brown was notoriously difficult to work with, and Wesley described it as tougher than his spell in the army.

“I remember one time I got a fine for having blood on my uniform. We were playing at the Apollo [in New York] and I was playing so hard my lip busted and was bleeding. And a little speck of blood got on my uniform. James fined me $50,” says Wesley in a recent Red Bull Academy interview. “I thought that was kinda unfair since he worked me so hard. [Laughs] Got a $50 fine. I wasn’t making but $200.”

The band had to take ironing boards on tour with them.

all night. In the dressing rooms [before concerts] there’d be ironing boards set up and people ironing clothes. It was a test of your ability to stay focused.”

Do you miss James Brown, I ask.

“Yes, I do,” he says after a pause. “He was a tough man, but he was very creative and innovative. He didn’t understand a lot about the technical aspects of music, but he knew what he liked and he knew how to get it. I admired him quite a bit – he was a tough

man to work for, but I learned a lot from him.”

In 1975, Wesley finally quit Brown’s backing band: “I sometimes would run into him and say hi … When I left the second time it was the end of it. I went on to [Parliament’s] George Clinton, Bootsy Collins and the Count Basie band, and went on to do studio work in California.

“I still admired him … but I admired him from afar, it was the best way for me to admire him!” He laughs.

Wesley has been a front man for decades now. “I’m my own person, but I’m more like Count Basie – I tend to hire musicians that are good so that I don’t need to yell at them or force them to do things. I hire musicians who I know will do the job and we get along real good together.”

These days, the grandfather of five lives happily in South Carolina, and goes on tour only three or four months a year. He is thrilled to be coming back to South Africa.

“Oh, we had a wonderful time,” he says. “It will be even better this time – I’ll have my full band.”

How long are you still going to play?

“Oh, as long as I can. As long as I am able to breathe air into this horn I’ll be doin’ it. I don’t intend to retire or to quit any time soon.”