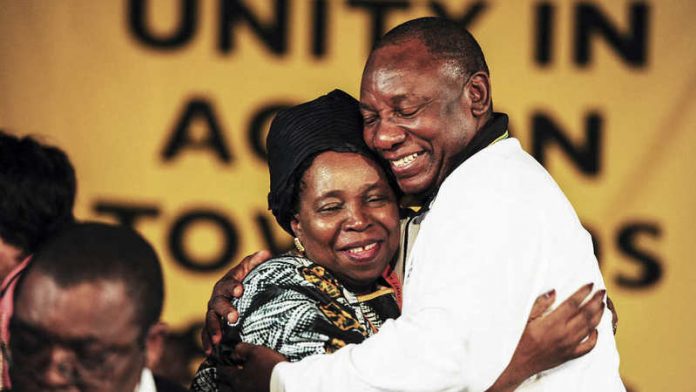 ANC deputy president Cyril Ramaphosa has declared his intention to stand for the ruling party’s presidency in 2017, sources say. The Mail & Guardian can reveal that Ramaphosa, whose future in the party has been uncertain amid calls for the ANC to elect a female president to replace President Jacob Zuma, declared his availability to his key lobbyists after they approached him to seek his commitment.

The lobbyists have advised Ramaphosa to stop singing Zuma’s praises every time he addresses government or party events as they believe this will work against him.

The ANC in Gauteng is expected to lead Ramaphosa’s campaign for the top seat. A senior ANC national leader involved in Ramaphosa’s campaign said selected leaders from Gauteng, the Eastern Cape, Northern Cape, Western Cape, KwaZulu-Natal and Limpopo held an informal meeting in Johannesburg a few weeks ago to discuss his campaign strategy and “we agreed that we should work hard to win maximum support” from those six provinces.

Lobbyists who support African Union Commission chairperson Nkosazana Dlamini-Zuma to succeed Zuma have opened negotiations with Ramaphosa to try to convince him to retain the deputy presidency.

“The offer on the table is that Cyril retains the deputy presidency,” said a lobbyist for Dlamini-Zuma, who is also a top government official.

But Ramaphosa is said to be making no promises to consider remaining the party’s second-in-command.

“Early indications are that he will say no,” said the same source. “He’s holding his own meetings with some ministers and working the branches. The ‘Premier League’ and everyone working on this campaign is conscious of that fact [that Ramaphosa is more than likely to refuse to remain deputy president].”

The “Premier League” – key lobbyists for a Dlamini-Zuma presidency – is made up of the premiers of the Free State, North West and Mpumalanga – Ace Magashule, Supra Mahumapelo and David Mabuza respectively – who also chair the ANC in their provinces.

Mathabatha’s spokesperson Phuti Seloba said the premier’s remarks should be seen in the context of Limpopo celebrating the achievements of one of its own.

“Cyril comes from here. We must stick together. Our relationship is not political or ideological, it is influenced by birth.”

Seloba said Mathabatha’s remarks were not about the ANC succession, Ramaphosa’s “political ambitions or lack of [ambition].”

ANC Limpopo spokesperson Khumbudzo Ntshavheni said the provincial ANC was yet to discuss the leadership succession.

The deputy president’s spokesperson, Ronnie Mamoepa, would not confirm whether Ramaphosa had been approached to throw his hat in the ring. “[His] view is that matters of ANC leadership are determined by members of the ANC and not by ­individuals,” he said.

Major boost
Dlamini-Zuma’s crusade to become the first female president of the ANC received a major boost when a group affiliated to her lobbyists won key posts at the ANC KwaZulu-Natal provincial congress.

The “Premier League” is supported by the ANC in KwaZulu-Natal, the ANC Women’s League and the ANC Youth League to campaign for Dlamini-Zuma to get the top job. The leagues are given the standing of provinces when they attend ANC elective congresses.

Ramaphosa’s group will nonetheless still try to get support from ­provinces already dominated by Dlamini-Zuma’s backers.

“It is not a secret that KwaZulu-Natal is now divided, so we are hoping to get support from the province as well,” said the ANC national leader working on Ramaphosa’s campaign. “We also plan to work hard to win support from the ‘Premier League’-controlled provinces.”

Meanwhile, Baleka Mbete, ANC national chairperson and speaker of the National Assembly, has been dumped as a possible contender for the presidency position.

“The plan was Baleka, but there is a [feeling] now that we should look at Nkosazana,” one of Mbete’s former lobbyists said. “She [Dlamini-Zuma] is going to benefit by default.”

Dlamini-Zuma won the hearts of senior members of the women’s league when she supported the winning group at the league’s congress.

‘He’s got his own money’
The South African Communist Party (SACP), which formed part of the lobby group that ensured Zuma’s election at the 2007 Polokwane congress, is said to be looking to Ramaphosa to take over from Zuma.

A senior SACP member, who is also a government official, told the M&G that Ramaphosa is “one person you cannot hold anything against. He’s got his own money and he will fight corruption and maladministration.”

The SACP is pinning its hopes on discrediting the “Premier League”, according to a party source.

“Even if people wanted to support this [woman president campaign], the fact that it’s being raised by [the]wrong people will harm it,” said the SACP leader. “Plus, Nkosazana has been out of action and might not be an ideal candidate. There is also fear that she will bring back a lot of Thabo Mbeki people.”

Not so, said a government official campaigning for Dlamini-Zuma. Although the source agrees there were concerns about “the TM [Thabo Mbeki] factor” before, he said there was now acknowledgement that “Mbeki’s influence is still there but not as big as it was before.

“When all fails, we don’t think the children [Dlamini-Zuma’s children] will allow her to pursue Zuma legally [for allegations of corruption that were abandoned on the eve of the 2009 general elections].”

The source said the ANC would be careful not to elect a president whose administration would fail to protect Zuma against prosecution.

“Whatever happens the ANC must never hear you say you want to charge Zuma. All those considerations make Nkosazana an ideal candidate,” he said. “Being AU Commission chair helped build her profile internationally. Everyone respects her as the face of the continent.”

‘Wait until the next congress’
Ramaphosa would have to battle the ghosts of all the alleged scandals he has been linked to, the Dlamini-Zuma lobbyist said.

“[We said to him] you’ve got a lot of things that will create problems. You’ve got Marikana, mining deals, business … with Eskom…. These boys [the Economic Freedom Fighters] keep digging [up] more dirt on you.”

He added that Ramaphosa was advised to “wait until the next congress and you will walk into the presidency position uncontested”.

“If he doesn’t agree, he will lose like Kgalema [Motlanthe, who was Zuma’s deputy and contested for the presidency at the 2012 Mangaung congress].”

Dlamini-Zuma’s lobbyists believe they are safe with the “Premier League” as key strategists behind the campaign.

“The ‘Premier League’ has got the ability to mobilise numbers and also dispense patronage. You can like or dislike them, but they have been able to mobilise resources over the years.” – Additional reporting by Qaanitah Hunter