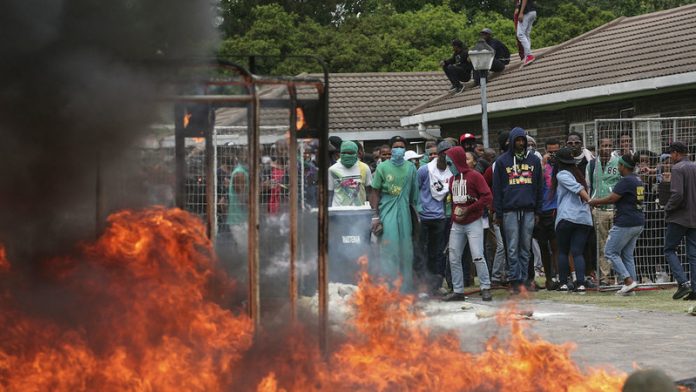 After nearly four weeks of protests and a relatively calm weekend, it seemed that peace had been restored to the University of the Western Cape (UWC). Exams began uninterrupted on Monday but two days later #FeesWillFall students shut down the university.

The shutdown was sparked by an email from the university council chairperson, Mthunzi Mdwaba, who refused the students’ demand for him to convene a special council meeting this week to discuss historical student debt. Mdwaba also reinstated the court interdict against protesters and snubbed them by refusing to recognise the movement as a legitimate student organisation.

“The only recognised structures that can request an audience with council are members of council, management, senate and the SRC [student representative council],” Mdwaba wrote to rector Tyrone Pretorius and #FeesWillFall students.

Students in the movement were angered by the email, believing it to signify a breakdown in their negotiations with the university management. Last week, students had twice met the rector to discuss their demands, which included an end to outsourcing services, a R1?000 increase in workers’ salaries, and scrapping registration fees and outstanding debt.

Although headway had been made, the email, the presence of private security guards and the arrest of the five students ignited further protests, vandalism and looting, garnering widespread criticism. UWC management released a statement saying it was “horrified that students could act in this way, in the name of ‘fees must fall’?”.

Because theirs is a historically black university, students said their protest is more likely to be ignored because UWC does not have the appeal of better-financed institutions. Comparisons have been made about how the different #FeesMustFall movements have protested, but UWC’s #FeesWillFall students say their protest is an appeal to be heard.

“This is just a message to management to say we are serious with what we are saying; we are not playing. They need to start taking students seriously; they need to start listening to our cries,” said student Sabelo Skenjana.

At lunchtime on Wednesday afternoon, tensions boiled over when riot police fired stun grenades, rubber bullets and teargas at protesters. Students retaliated by climbing on to roofs and throwing rocks at police. As clashes continued throughout the day, students chased private security officers and, in one instance, allegedly assaulted a guard. Some disarmed police officers of their weapons and shields.

As the chaos unfolded, Pastor Xola Skosana from the Way of Life Church sat down with protesters and attempted to restore calm. #FeesWillFall students listened to the pastor as he emphasised the need to organise in the wake of growing uncertainty and an absence of leadership. Skosana had earlier spoken to a member of the university’s management on the phone after the initial clashes, urging their presence.

“You have men with guns who are shooting at our children,” Skosana said. “The management should be here with the students, not the police. The police don’t know what has been happening on this campus for the last two weeks.”

The battles with the police throughout the day ignited further retaliation. As images of a burning residence building, broken windows and ransacked goods swept across social media, the UWC #FeesWillFall movement drew ire for the chaotic turn the protests had taken.

Students observing from the sidelines as police and protesters faced off told the Mail & Guardian that they did not support the protests, as they watched couches being thrown on to a burning heap of furniture. The absence of management on campus and the police violence led other students to support the protests.

In one instance, police allegedly used former SRC president Msingathi Kula as a human shield during a battle with students. Bystanders verbally confronted the police as protesters dispersed with rubber bullets flying in their direction. Instead of putting Kula into a police van, riot police held him in front of them as they marched towards the protesters. Students blamed management for the chaos.

“I was next to the commander of the police when the lawyer for the institution was being called to come and attend to this matter. He deliberately said [they should] continue with the shooting. How do you give an instruction of that nature?” Skenjana asked.

The university’s management released a statement later in the day, saying the institution would be closed for the rest of the week and exams would be postponed. It said its primary objective was to instil calm on campus.

“In consultation with the deans and academic staff, we are currently looking into various options to ensure that we are able to conclude the academic year,” Pretorius said in a statement on Wednesday.

Students and management are still caught in flux, with each blaming the other for the violence that turned a place of education into a battleground.

Examinations that were scheduled for Thursday, Friday and Saturday will begin on December 1, leaving some students disappointed in the delay. The #FeesWillFall movement has vowed to continue protesting until its demands are met.

While life goes on for the students at UniZulu, may they spare a thought for Ndumiso Ntsele whose only sin was to try to make an honest living in tough economic times
Read more
Education

The university with its rich history is not only the pride of the Eastern Cape but of the continent. It needs to regain its glorious status in academia and not only be in the news for unfortunate reasons
Read more
Education

Young people want better representation in the corridors of power, a decent education and an economy that guarantees them jobs
Read more
Advertising
Continue to the category
Politics