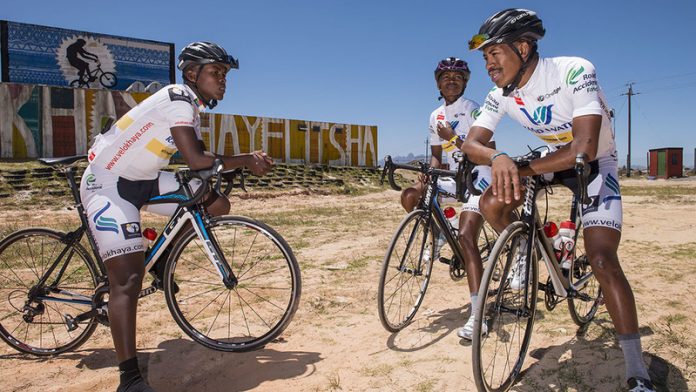 On a grey patch of land in Khayelitsha, a few containers and a skeletal structure form the Velokhaya Life Cycling Academy. With the exception of a colourful mural, the plot seems barren, but it is here where young township cyclists are developing their skill and their education.

“The prime objective of Velokhaya was to take kids off the street. We’re using the bicycle as a tool to promote education,” says Sipho Mona (31), the general manager of the academy.

Velokhaya [coming from home] was started in 2003 by Amos Ziqubu and Glyn Broomberg, in a shack in Ziqubu’s back yard with whatever bicycles the two could find.

Now, Velokhaya is home to more than 100 bicycles. It boasts a BMX and a road-cycling programme, and 111 enthusiastic cyclists aged between four and 24. The academy has also become the launchpad for young black cyclists to break into professional cycling, going from a dusty township to racing in Europe’s most prestigious events.

“The cycling part, the professional side of it, with the likes of Songezo Jim and Luthando Kaka, was all serendipitous. That was not our goal; we just saw that there was talent here,” says Mona.

Kaka left the academy in 2010 after joining Team Bonitas in Johannesburg. In 2013, he became the first black captain of a professional cycling team, for Team Bonitas. It is Jim’s success, however, that put Velokhaya on the map. The 25-year-old rides for Team MTN-Qhubeka, Africa’s first professional continental road cycling team.

A new group of cyclists is now kitted in the black-and-white gear of Velokhaya’s team: Team Rand Water. Established in 2005, it is still South Africa’s only professional cycling team in a township.

Slow funding prevents Velokhaya from taking its eight riders all the way to the top, but opportunities have been opened.

“You can’t have a budget of R1-million if you want to run a professional team riding internationally. You need at least R5-million, which we don’t have. That’s why, with the likes of Songezo or anyone who shows full potential, we act as agents but we don’t get paid,” Mona says.

But the academy is wary of big- league teams who knock on their door. Most of Velokhaya’s staff come from the townships. They know first-hand that a child in a township has different needs to most pro cyclists. As Mona puts it: a Velokhaya trainee is more concerned about an empty stomach than being able to afford the best-quality gear.

“You almost have to play the father figure. You can’t just give a kid a bicycle and think that it’s all good. It doesn’t work like that. You have to nurture the kid,” Mona says.

The nurturing doesn’t just apply to professional cycling. When it comes to academics, Velokhaya monitors each student’s report card. Should a student fail a term at school, their bicycle is confiscated.

“We play the parental role at schools. The schools know more of our staff than they do the parents. We’re not proud of it – it’s not nice for the parents not to visit the schools,” Mona says.

Most of the parents of Velokhaya’s young cyclists work in low-paying jobs. They leave home early in the morning and return late at night. They have little time to monitor their children’s school activities. Velokhaya handles this responsibility.

Straight after school, the children head to the academy’s premises. This keeps them off the streets and busy on their bicycles. They then go home to do their homework, too exhausted to succumb to negative influences on the street.

“Cycling is an exam. You study through training, and you write the exam, which is the race,” says Mona. “If you don’t study, and you go write an exam, then you’re bound to fail.”

Velokhaya, with funding from MTN, has begun constructing an information communications technology and life skills centre, which also offers a safe learning environment for students. With more than 100 schools and just two libraries in Khayelitsha, Velokhaya identified the need for an ICT centre to develop youngsters.

But Velokhaya’s youth can’t be protected from everything. Should they wish to pursue cycling professionally, the road is open to them, but it’s not an easy ride. Earlier this year, a competing cyclist called a Velokhaya rider the k-word at a race. The cyclist was suspended.

“Our riders are disregarded because of their colour, not because of their skill and how they ride. There are other people who feel black people shouldn’t be part of the sport and should stick to soccer,” Mona says.

Discrimination isn’t holding Velokhaya back. Success hasn’t come easy, but perseverance has brought the academy to where it is.

Velokhaya hasn’t lost itself to the bright lights of pro-cycling – it’s still set on creating youngsters who champion more than just a bicycle.

“It was hectic,” Songezo Jim says of the first time he did a full ride on a bicycle – a day peddling around Cape Point until he was exhausted.

Jim stepped on the peddles for the first time at the age of 14. His interest was sparked by the Cape Town Cycle Tour and he got a chance to hop on a bike when the Velokhaya Life Cycling Academy began training in Masiphumele, the township in Fish Hoek where Jim grew up.

“It was very difficult to keep on going. A lot of my friends ended up stopping because of the things that went with it: bikes needing to be serviced, buying the tyres … We couldn’t afford those things and that’s where Velokhaya managed to look after us,” Jim says.

The perseverance paid off. After living in Khayelitsha for one year, Jim joined Team Bonitas in Johannesburg. From there, he earned a spot in the coveted MTN-Qhubeka team in 2013. He now lives in Lucca, Italy, with his team-mates, but goes home to Masiphumele when he can.

He hopes to achieve more next year, but here’s his track record so far:

His accomplishments haven’t made him forget where he  comes from.

“I don’t really like being called the ‘first black’. When I’m competing, I don’t look at how I’m black; it’s about doing my best to be the best,” Jim says.

“But, looking back home to some of the kids, it actually gives them hope that we can also do something.”

A fortnight after an early winter downpour, a recently established informal settlement comes to terms with the Cape’s hydromorphology of seasonal floodplains.
Read more
National

Four police officers are being investigated after a video of them evicting a man, who had been bathing at the time, was circulated on social media
Read more
National

Covid-19 stigma: Revealing the pre-existing fault lines in our society