The Mosenekes: A family built of pain and courage 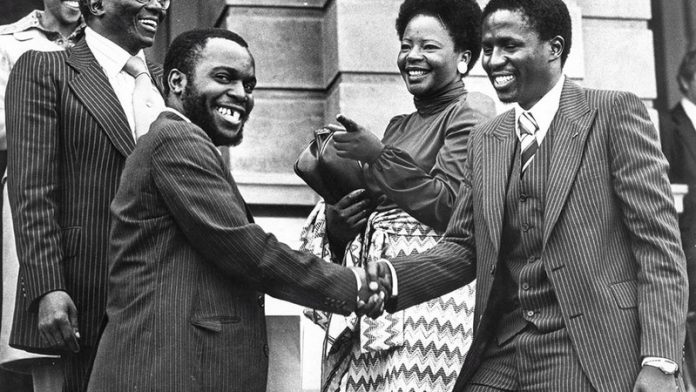 Karabo Moseneke (90) loves to feed people. When I arrive to interview her, I’m greeted by a huge teapot and plates piled high with scones and cakes.

She looks crestfallen, and turns to her son, Dikgang Moseneke, the deputy chief justice and South Africa’s second-most powerful judge.

“Karyn is a diabetic like Bo,” he tells her with a smile. “She can’t eat these things.”

He speaks lightly, his words giving no hint of the sadness hovering at the edges of his reference to his son, Reabetswe Botshelo “Bo” Moseneke. The young sports presenter died from diabetic complications a decade ago. He was only 26.

“Bo would tell me what he likes to eat,” Karabo responds, not missing a beat. “If I had known, I would have made something special for Karyn.”

It’s a quick exchange, but a telling one. In this home, hints of pain and loss abide in each room like a familiar visitor whose presence is always acknowledged and never denied. This is a family that doesn’t seek to ignore grief, and is not frightened by it.

At the heart of this family’s almost instinctive resilience, their courage, is Karabo Mabel Moseneke. The former teacher endured the pain of all four of her sons being imprisoned, beaten and tortured by the apartheid security forces, all while they were children or young men.

She endured witnessing the consequences of that violence on her sons’ bodies and minds. She watched her son Dikgang grow up behind bars on Robben Island, witnessing him transform from a 15-year-old boy into a 25-year-old man in six-month increments – the time that needed to pass before she could visit him again.

“We were feeling the pain when we were home, thinking of them and their suffering that side, and gradually they got used to the pain, not that much, but at least they could accept it. It wasn’t very easy,” she says. “You know, if anything comes, and comes starting with pain … it is first painful, and then from that pain it comes to sugar, as if it’s a sweet.”

The analogy is illustrative of how Karabo Moseneke understands and describes her life: tales of her family’s joys and struggles are often accompanied with references to food and tastes. She grew up in a religious home, where her parents fought to ensure there was enough money to fund her education as a teacher. Her mother worked in a laundry and her father was a chef.

“That is why we love food and we can cook,” she says.

“What did your parents teach you,” I ask, “that made you who you are today?”

“Endurance,” she answers, instantly. “Endurance, endurance, I am telling you … and to share with others.”

I ask Dikgang Moseneke the same questions when I interview him days later. Just like his mother, he answers instantly: “Endurance.”

Karabo Moseneke (90) endured the pain of all four of her sons being imprisoned, beaten and tortured by the apartheid security forces.

He had just explained to me how apartheid police tortured him by handcuffing him and hanging him from the ceiling of his cell. His handcuff torture was similar in some ways, he says, to how Mozambican taxi driver Mido Macia was handcuffed to the back of a police truck and dragged along the street.

When the teenage Moseneke begged to see a doctor, an apartheid policeman put on a doctor’s white coat and walked into his cell “and then beat me seriously”.

Moseneke’s wrists are still deeply scarred by that torture, his flesh marked with the dents created by those hours spent hanging from the ceiling, suspended between life and the constant torturous possibility of death.

It had been the sight of the Sharpeville dead, mowed down by police three years before his own arrest in 1963, that had prompted the young Moseneke to join the African Students Union, which was closely aligned to the Pan Africanist Congress.

“The inequality was egregious. You could see it out there, jumping at you as a young person,” he says. “And just remember the sense of right and wrong of young people. My grandchildren now tell me: ‘Grandpa, why does he get two sweets and I get only one? It’s unfair, grandpa.’ The kids are the first to say it.

“I had caught on to a wonderful phrase from someone called Robert Sobukwe, who said: ‘You must be your own liberator, in your lifetime.’ Those words held the promise that I wouldn’t be a slave forever. I will be my liberator. And that has formed my world view.”

Dikgang Moseneke would pay a very high price for that view. He was only 14 years old when police descended on his home on the third anniversary of the Sharpeville massacre and arrested him for plotting to overthrow the apartheid government.

He would go on trial with fellow schoolchildren, teachers, his headmaster and his deputy headmaster. The basis of the case was meetings that the group had taken part in, Moseneke tells me “after our sports practices”.

“Now you can imagine the speeches in those meetings,” Moseneke says, as he does a spirited re-enactment of his young self addressing his fellow pupils. “That case they could prove easily.”

Moseneke’s mother and father attended their son’s trial every day for the next six months. Apartheid police officials made a point of asking Karabo Moseneke if she was “number six’s mother”.

“I told them that I am definitely his mother,” she says, “Then they came and said: ‘You know, hy gaan mos hangpaal toe, nommer ses [he is going to the gallows, number six]’ … My feeling was just cold, I couldn’t understand … I knew when they said ‘hy gaan hangpaal toe’, it means they are going to hang him. Who has he killed? Because even if you have killed someone, it’s not common or easy for you to go to hangpaal …when I was sleeping, I used to dream hangpaal, hangpaal, because I got it every day for the six months I went to court.”

Moseneke’s father was only 40 when his son was arrested, but his hair went white almost overnight. Sobbing, the headmaster had begged the judge hearing the case not to send his son to jail.

His pleas were in vain. Dikgang Moseneke would spend the next decade on Robben Island.

In those 10 years, he obtained his matric, a BA in English and political science and a BJuris degree through Unisa. Under house arrest, he obtained a law degree – and went on to complete his articles. After becoming an advocate, he went on to be chosen as one of South Africa’s first black judges.

Perhaps, unsurprisingly, some of Moseneke’s strongest memories of Robben Island involve his near constant state of hunger – and his mother’s response to it. Horrified by the sight of her emaciated son during her first visit, Karabo Moseneke persuaded a prison warder to let her give the teenager a foil-wrapped roast chicken on her second visit.

Dikgang Moseneke’s face lights up when he speaks about that chicken, which, he says, “was browned up and lovely”. He devoured it, his mother tells me, “bones and all”.

“I was looking for the bones, but there were none,” she says, giggling. Her face is glowing, and she is almost overcome with laughter.

When Dikgang Moseneke speaks about that meal, he doesn’t laugh. He has told me of the torture he survived, and the thousand banal cruelties he endured as an enemy of the apartheid state, with a determined matter-of-factness.

A determination, perhaps, to show he has not been emotionally scarred by those who forever marked his flesh.

But when he talks about his mother’s roast chicken, the man who has written some of the Constitutional Court’s most seminal judgments seems overwhelmed.

“That was my mother expressing her love, as she always does, with food,” he says. His eyes glisten, and he goes silent.

We are sitting in his office at the Constitutional Court, surrounded by light, and the air is thick with something like pain or love.

The arbitration ruling specifies that both Constitutional and general damages have to be paid.
Read more
Opinion

Esidimenis are going on all the time

A new Lady Selborne is rising from apartheid’s ashes

Lawlessness moves like a cancer through the constitutional body of South Africa.
Read more
Education

The deputy president believes that the country will only know that it has made progress once it is able to provide free higher education to the poor.
Read more
Advertising
Continue to the category
Education