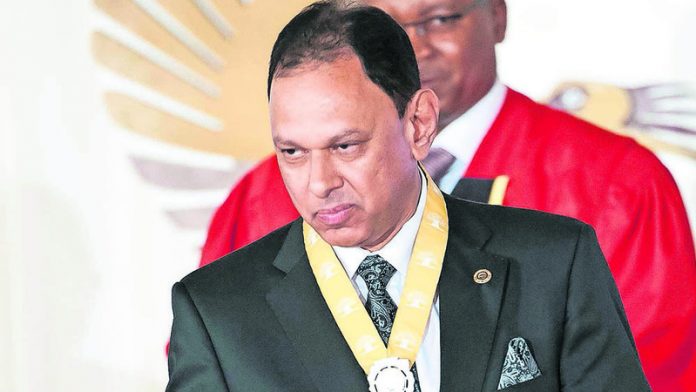 A police general has laid charges of defamation and fraud against Yusuf Abramjee, who has built a profile for himself as South Africa’s unofficial crime-fighter-in-chief.

Abramjee, who resigned as Pri­media’s head of news and current affairs on Thursday, now finds himself in the middle of a dirty turf war between former and current senior police officers.

He was also at the helm of Crime Line, a Primedia initiative “aimed at getting criminals off the streets”. He has resigned from Crime Line’s board of trustees too.

He was announced as the new global communications director for Crime Stoppers International (CSI) shortly after his resignation from Primedia was made public.

Abramjee has been praised for his high-profile campaigns in rallying South Africans to get involved in fighting crime, but is now leaving that job under a cloud.

Abramjee is implicated in a cam­paign to tarnish the name of Lieutenant General Solomon Makgale, the spokesperson for suspended national police commissioner Riah Phiyega.

The Mail & Guardian has seen evidence of a criminal case laid against Abramjee, a family member, Afzal Abramjee, who is also a police reservist in the National Investigation Unit, and a senior section commander in the South African Police Service (SAPS) head office, Brigadier Naseer Mohammed.

Makgale charges that Abramjee went on a campaign to defame him by circulating a dossier containing false allegations. These include that Makgale owns a taxi business, which is in conflict with his SAPS position. The dossier also lists his credit profiles – personal information that includes his property ownership and an eNatis report showing traffic infringements.

A paper trail shows that a company with links to Yusuf Abramjee’s family applied to get access to Makgale’s credit profile on October 8 and that a contact person on the request was Afzal Abramjee.

Afzal Abramjee had not responded to emailed questions by the time of going to print.

The police spokesperson, Brigadier Hangwani Mulaudzi, confirmed that Makgale has lodged a criminal case, but said SAPS did not want to discuss the details of the case because “we don’t want to disturb the investigation. We want to let people do their job.”.

In his statement, as part of his criminal case laid at the Brooklyn police station, Makgale complains that his personal information was obtained fraudulently because he did not grant permission to anyone to access it.

He became aware of the dossier on October 15 after a forensic consultant, Paul O’Sullivan, brought it to his attention. O’Sullivan claimed Yusuf Abramjee shared the dossier with him and asked him to speak to a newspaper editor because O’Sullivan himself was mentioned in the Makgale dossier.

The Sunday Independent published a story on November 1, claiming that Makgale was leading a plot to “destroy prominent South Africans perceived to be Phiyega’s opponents”. The story listed Abramjee, former national police commissioner Bheki Cele, and the divisional commissioner for detective services, Lieutenant General Vinesh Moonoo, as some of the people targeted by Makgale.

Makgale confirmed that he lodged a criminal case with the police on Wednesday. “The past couple of weeks have been difficult for me and my family. My personal safety and career have been severely compromised as a result of these ridiculous claims in the media,” he said.

At the centre of tensions between Abramjee and Makgale is the alleged lack of accountability for Crime Line funds as well as money raised for hosting a CSI world conference in Cape Town last year. An audit report on how much was raised for the conference and how the money was used has yet to be delivered, following a request by the police, according to a police source.

Abramjee chaired the organising committee of the conference, which the Crime Line Foundation hosted.

Makgale is said to have asked questions about the money at several meetings of the crime-fighting initiative. Crime Line is an independent tip-off service founded by Primedia and the police.

Abramjee is also accused of having raised funds for Crime Line, which goes against a condition set out in the memorandum of understanding signed with the police. The condition stipulates that Crime Line cannot be used for profit-making purposes.

Makgale is also said to have raised concerns about Abramjee heading Crime Line while he remained a journalist and an anti-crime activist.

Abramjee told the M&G on Thursday that he knew nothing about the case. “I have got no idea what you’re talking about,” he said. “He [Makgale] has got the right to do anything he wants.”

Abramjee refused to respond to allegations, saying he would “answer to a court of law”.

He said he also instructed his attorneys to sue those allegedly involved in the alleged dirty tricks.

O’Sullivan, who confirmed that Abramjee asked him to speak to a senior editor at the Sunday Independent, said he had known Abramjee for years and was “saddened” by the developments.

“I have always known him to be an upright person that leant in the right direction, until now,” O’Sullivan said.

“I am therefore saddened to see that he has become embroiled in such potentially damaging activity, which places him and others, including myself, in a very difficult position. We now have all these people that are supposed to be pitted against the underworld engaged in distractions.”

Paul O’Sullivan vouches for the character of Makgale and alerted the police officer to the existence of the dossier. (Lauren Mulligan, Gallo)

When asked whether he had shared the Makgale dossier with O’Sullivan or tried to get the forensic consultant to work with him, Abramjee said: “I reported allegations of dirty tricks to the acting national commissioner immediately after they were published. He undertook to probe and the process must run its course.”

O’Sullivan said he could “not stand by and watch a covert attack on Lieutenant General Solomon Makgale who, whilst we may have had our differences over the years, did not deserve to become the victim of character assassination. I have known Solomon for 15 years. There is nothing wrong with that boy. He is not corrupt, he has never done anything criminal. I am shocked that someone like Yusuf would want to destroy this man’s career.”

Mohammed said he was not allowed to speak to the media.

“If he opened up a case, it is still under investigation and I’m sure we will be given an opportunity to respond,” he said.

Mulaudzi said Afzal Abramjee was not an employee of SAPS so the police could not speak on his behalf.

O’Sullivan said, now that Abramjee was moving on to another job: “I think it would be a good idea to make sure that the kitchen has been left clean. There have been rampant rumours about the finances of the Crime Line foundation.

“I think it would be in everyone’s interests, particularly the sponsors and users of the funds to the foundation, that the foundation is subjected to a proper forensic audit, to dispel these rumours.”

The Crime Line co-ordinator, Marisa Oosthuisen, said Primedia and its companies had invested “millions of rands in free airtime and inventory” to assist in marketing the tip-off service. “The group companies also fund the running costs of the organisation.”

The Crime Line Foundation Trust was established in response to requests from community organisations for funding and support, Oosthuisen said.

In the past few years, it has been difficult to understand what Yusuf Abramjee does, but a glance at his Twitter feed would suggest that he may be South Africa’s activist-in-chief. Cash heists, proposed censorship and even Oscar Pistorius got him going.

He served as the head of news and current affairs at Primedia Broadcasting and was also head of communications for the Primedia Group.

At the same time, Abramjee was everywhere on social media, in local newspapers, on the radio and sometimes on TV, punting the work of Lead SA and Crime Line, two organisations he headed.

Crime Line is an anonymous crime tip-off service that is credited with thousands of arrests and the recovery of millions of rands in stolen goods.

Abramjee boasts of having received one of the highest orders in the country – the Order of the Baobab, silver, awarded by President Jacob Zuma for his work as head of those two organisations.

Although he has been a journalist for nearly three decades, Abramjee has often become a newsmaker. Most recently, he wrote a much-publicised open letter to Zuma about crime in South Africa, which drew both support and criticism from the public.

He trained as a teacher and first worked as a journalist for the SABC in the late 1980s. In 1994, he joined Primedia, where he has worked in various capacities.

A previous version of this story incorrectly stated which editor at the Sunday Independent was approached with the dossier. This was corrected on December 8 2015.