Malawi tobacco going up in smoke 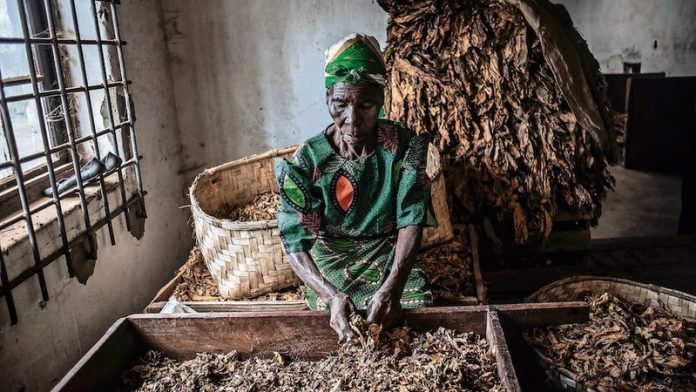 Malawi’s $165-million-a-year tobacco industry has fallen on hard times, with a growing number of farmers complaining that they can no longer make a decent living.

Since 2010, the industry has been hit by unstable and falling prices – which growers blame on a buyers’ cartel – sales volumes that have not recovered from a crash in 2012, and a high rate of rejection at auction.

Tobacco is Malawi’s economic backbone, contributing 11% of gross domestic product and 60% of its foreign exchange earnings. There are 350 000 growers in the industry, which provides 80% of rural jobs.

Production this year, at 190-million kilograms, was slightly down on last year, but almost 20% down on 2011.

Central to growers’ grievances are hefty deductions from their earnings and growing debts, which they blame on the integrated production system (IPS) they believe buyers are forcing on them.

Based on seasonal contracts, the system involves buyers in production from the outset and ties growers into loans for inputs.

According to tobacco-buying companies, IPS is market-driven. They want better quality control and say their “blue chip” customers need assurance that tobacco is produced in a “compliant” manner.

In a “pariah industry” that must keep its nose clean, this means no child labour and environmentally friendly practices to avoid deforestation and pollution.

According to government, 80% of Malawi’s tobacco is now sold on contract. Before the IPS was officially introduced in 2012, sale by auction was a legal requirement.

But the system has hit resistance. In February, farmers petitioned Parliament and the agriculture ministry over their frustrations with IPS and the deductions it entails. In April President Peter Mutharika acknowledged farmers were experiencing problems with it, such as costly loans, lack of price agreement with buyers and high rejection rates.

Jedeni Clifford, who has farmed tobacco for 12 years in Kasungu, central Malawi, complained his profits keep dwindling: “There was a time when I could sell my tobacco and make a fortune – no more,” he said.

In 2013-2014, he took out a loan in the form of inputs from a buyer without knowing how much he owed. “I didn’t know the interest rate either. But I had to get into a contract to survive,” he lamented.

Clifford said the contract assured him of a market, but he was not given a guaranteed price. After paying his labourers and other costs, he could not repay the debt. “I have received no penalty for now. But I know failure to pay back the loan can cost [me] my property.”

“We don’t take sides or blame buyers. But the 2015 statistics indicated that farmers that were not sponsored received low prices.”

Jamila Banda, chairperson of the Mau Msamatha tobacco farm club, in Kasungu, said he took a K700 000 (about R17 500) loan, also in the form of inputs. He later noticed “a huge deduction after sales”.

Mark Ndipita, of Auction Holdings, which manages tobacco floors, observed IPS helps farmers with inputs and loans, but some farmers take out loans each year and many cannot repay them.

The growers also see a covert campaign by buyers to force them into contracts. They say, over the past season, IPS farmers got better prices than those outside the system – despite having the same quality leaf.

Ndipita confirmed the rejection rate in auctions last year was as high as 90%: “We don’t take sides or blame buyers. But the 2015 statistics indicated that farmers that were not sponsored received low prices.”

But the major buyers, Alliance One, Limbe Leaf and Japanese Tobacco International (JTI), insist growers are free to reject contracts and their awareness of what they are getting into is fundamental to the model.

They said they do not impose penalties on loan defaulters and absorb the losses, but that defaulters are not reregistered for the next season.

“They are taking advantage of this to abuse us.”

Farmers also blame the companies for the weak tobacco price. Said Banda: “Buyers have realised our weakness of only relying on tobacco as a cash crop. They are taking advantage of this to abuse us.”

Agriculture Minister Allan Chiyembekeza dismissed buyers’ cartel claims as “hearsay at the moment. Nobody has come forward with evidence for government to act on”.

Levels of indebtedness accompanying the new system are also disputed. Alliance One said it has a low default rate – some 8% of its 25 000 contracted growers over three years.

But Limbe Leaf said it has experienced a high rate of default because a proper “grower identification system” didn’t exist.

“We have written off huge amounts of money in the past. It should be appreciated that IPS is an expensive model for buyers,” said Febbie Chikungwa, Limbe’s corporate affairs manager, who added that Limbe supported it as “it is the model Malawi’s customers are looking for. Without it, some important customers will shift their focus and source tobacco from countries that have a compliant source.”

Malila said prices aren’t included in the contracts because the Tobacco Control Commission approves them late each season. She said farmers know the value of inputs through invoices and delivery notes. Bank charges, interest and other deductions depend on when they repay loans and the exchange rate. She added that farmers’ low financial literacy is a problem and the company has started training farmers.

Also angering farmers is a growing move by buyers into production. The chief executive of the Tobacco Association of Malawi, Graham Kuimba, remarked: “I wouldn’t conclude that this is why they are offering low prices, but it could be a contributing factor.”

Alliance One said it has moved into farming because of the decline in commercial tobacco growing, especially the flue-cured variety, where output has fallen from about 23-million to eight million kilograms.

Malila said the move was endorsed by government, which asked the company in 2002 to grow specifically for the Asian market.

Deepening the sector’s woes is the lack of an updated tobacco law. Years after IPS’s launch, the agriculture ministry only recently submitted draft laws to the ministry of justice.

Said Jayne Munthali, JTI’s communications manager, a comprehensive law was needed “to ensure that the interests of both the grower and buyer are adequately provided for and protected by the law”.

The IPS operates under rules passed by Parliament last January under the old Act. A long bureaucratic delay is likely before the new law comes into effect.

“No government extension worker has visited this area to educate us”

Kuimba said the hiatus has led to disorder, with too many players – government recognises 11 tobacco growers’ associations.

Diversification into other crops, given Malawi’s perennial food insecurity, might seem an answer.

But Malawian nongovernmental organisation Civil Society Agriculture Network notes in a study that the diversification strategy launched 30 years ago failed, in part because of “poor dissemination of technical and economic information”.

Banda echoed this, saying he has little knowledge of crops other than maize, which he grows on a small scale for domestic consumption.

“No government extension worker has visited this area to educate us on crop diversification,” he said.

Chiyembekeza conceded the marketing system is unstable but Malawi “cannot stop growing tobacco overnight. We have strategies to gradually diversify to other crops, but can’t just stop farmers from growing tobacco. There’s still a market out there and we have to produce according to demand.”

Alternatives ‘not as profitable’

Anti-tobacco campaigners have focused on Malawi and Indonesia as key examples of exploitative practices in tobacco growing that trap farmers in a vicious cycle of debt, says the website of the International Tobacco Growers’ Association.

Defending the contract system, it says smallholder farmers often cannot afford fertilisers, seed and other inputs, lack access to credit and know-how, and cannot find a market for their products.

The association argues that tobacco is more profitable than most crops. “This is acknowledged in all relevant literature … including studies commissioned by the World Health Organisation. Indeed, if that was not the case, farmers themselves would have already switched to better alternatives.”