No fees: Breathe fire into ubuntu 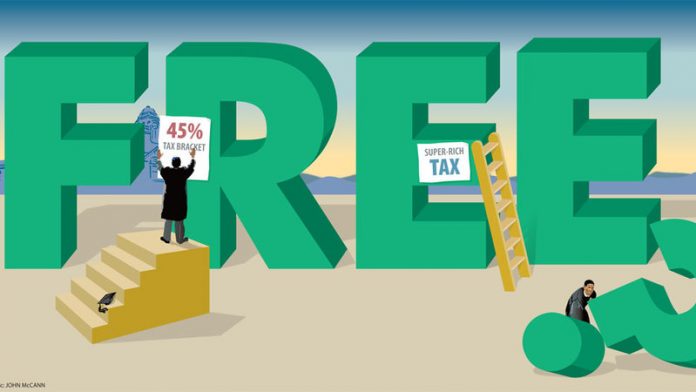 Students have won the battle for no fee increases. But have they won the war for free education?

The government says it favours free education for all but is still to say how this is to be financed. The only indication so far is that the government, along with the credit ratings agencies, investor think-tanks and the mainstream business media, agrees that higher education can be financed only by reallocations, reprioritisations and greater spending efficiencies.

The intention, in other words, is to rob Peter to pay Paul. The government and the various business interests speak even more loudly against tax increases. The mere thought of targeting the rich invites outrage.

Reallocations and shifting priorities mean one thing only: universities will be squeezed to somehow make do with even less. “Even less” needs spelling out. Between 2000 and 2013 government’s contribution to university budgets decreased from 49% to 40% and student fees increased from 24% to 33% and, as a consequence, more than doubled from a total of R7.8-billion to R17.83-billion. Universities are now expected to make do with no student fees. Worse still, the government’s medium-term budget proposals, announced during the height of the student insurrection, reveal still further government cuts to tertiary education. But an even more serious sting awaits the universities.

There are reports of expected appointments not being made and of posts not being filled. Students may end up fee-free – but only because there is very little education. The fate of public universities might well be foretold by the plight of non-fee-paying state schools.

Alternatives
But there are viable financial alternatives. Consider the following:

• Freeze tax brackets. As part of our progressive tax system, people pay tax according to their income, with those below a threshold paying nothing and others paying increasingly higher tax depending on which tax bracket they fall into.

If no adjustment was allowed for inflation, people could find themselves in a higher bracket and thus paying higher tax even though their standard of living had not improved. To prevent this outcome, governments usually adjust the lower and upper limits of the brackets.

Our government’s practice has been to adjust these limits above the rate of inflation, in effect giving a tax cut. For the very rich, this has been a huge bonus. For instance, in 2005, when inflation stood at 4%, the top tax bracket was raised 33%, from R300 000 to R400 000.

If the government had kept the personal income tax stable since 2005/2006 – only raising tax brackets strictly at the rate of inflation – personal income tax would have added more than R150-billion to the present budget. The 0% increase in fees is projected to cost R2.6-billion.

It is against this R150-billion handout that paying for tertiary education fees of R26-billion to R28-billion a year needs to be seen. If the government froze tax brackets at their present levels, using the 6% forecast rate of inflation, this would yield more than R10-billion in the coming fiscal year (depending on wage agreements during the year).

The predicted growth of the national income would, in turn, increase the amount of tax available for collection. The second year of bracket freeze could thus be expected to yield more than R20-billion. By the third year, the addition would be well over R30-billion. This alone would pay all student fees. This measure could easily be adjusted over time to allow for bracket increases up to whatever the prevailing inflation rate might be.

Minimal cost
The cost of this tax bracket freeze per tax payer is minimal for most people. A bracket freeze in the present 2015/2016 budget would have meant a mere R44 to R72 of additional tax to be paid, per month, for those in the lowest tax bracket of incomes above R74 650 a year. It would be easy to recover this cost – parents currently paying university fees would have no fees to pay.

Additionally, the Unemployment Insurance Fund’s (UIF) scandalous surplus of R70-billion could be put to good use; it could pay for scrapping the 2% tax on wages up to R14 000 a month for four to five years.

• Reintroduce the 45% tax bracket for incomes above R1-million. This would yield an additional R5-billion to R6-billion.

• Register all the super-rich for tax. The official Tax Statistics 2014 report from the South African Revenue Service and the treasury gives a figure of about 4 200 individuals with an annual income of R5-million or more. Capgemini’s 2014 World Wealth Report, however, estimates there are 48 800 high-net-worth individuals in South Africa, each with an annual income of more than R7-million or with assets worth R70-million.

• The Public Investment Corporation (PIC) should provide credit at a regulated interest rate. Contrary to popular belief, the apartheid debt that made life difficult for the new ANC government in 1994 was not mainly foreign debt. The bulk of the apartheid debt was caused by the outgoing apartheid government’s decision to secure the large pensions expected by the apartheid state’s senior public officials, such as generals and judges. To fund this pension guarantee, a huge amount of public money was pumped into the Government Employees’ Pension Fund, which was, and is, administrated by the PIC. This public money is now worth some R1.3-trillion. The government controls the PIC.

Additional billions
To appease the rating agencies and to avoid having to pay even higher debt interest rates, the government has committed itself to reducing the budget deficit from 3.8% to 3% of gross domestic product over the next three years. If the budget deficit was kept at the present 3.8%, there would be an additional R22-billion available in year one, R28.7-billion in year two and R42.2-billion in year three.

Over this three-year period, the PIC could be obliged to put, say, 50% of its assets in long-term state bonds that could not be traded. This would enable the government in effect to borrow from itself at an interest rate that would still secure pensions as well as social stability. Every 0.5% decrease in the average market interest rate on the state debt would save R11-billion to R13-billion a year for the next three-year period.

What all the above point to is the large amounts of money available. This singular fact is lost when the focus is narrowly on poverty. South Africa would still remain a decidedly unequal society, even if all these measures were to be adopted. All that would happen is that it would be slightly less unequal. The rich, along with all their privileges, would still be more than comfortably rich.

The only things preventing the adoption of the moderate measures being suggested here are the values and attitudes that make capitalism what it is. Only the class values of capitalism prevent us from using a small part of the wealth of the rich for the common good. Free education is affordable. Turning this into a reality means continuing the struggle to breath fire into ubuntu.

Jeff Rudin works at the Alternative Information & Development Centre. This article draws on a two-part piece by Dick Forslund, published by the Daily Maverick, “The political budget crisis and alternatives to austerity”