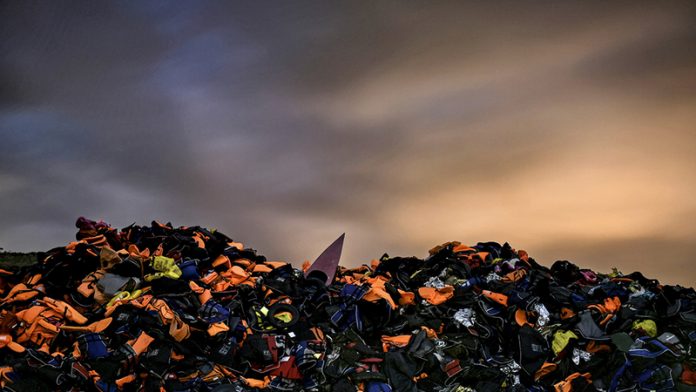 At Emre’s boat shop in Izmir, one of Turkey’s major ports, you can’t turn around without bumping into a pile of inflatable rubber boats.

Today there are 16 stacked in beige boxes, all numbered with the same inscrutable code, SK-800PLY, and all newly delivered from China.

If Emre’s maths is right, they will all be discarded on a Greek beach in a few days. His shop is where you buy boats that take refugees to Europe – and where they are still being sold at a rate of nearly a dozen a day.

“In the summer, we sold more,” Emre (not his real name) tells a Syrian customer. “But we’re still selling six of the cheaper boats every day, and five more expensive ones. How many do you want?”

European officials met their Turkish counterparts on Sunday, in a bid to persuade Turkey to do more to stem Europe’s greatest wave of mass migration since World War II.

Despite the worsening weather, another 125 000 asylum-seekers arrived in Greece from Turkey in November – four times as many as during the whole of 2014. And the biggest proportion probably passed through this quarter of Izmir.

“On the left are the hotels where the smugglers house their clients,” says Abu Khalil (not his real name), a Syrian Kurdish smuggler. “On the right are the ‘insurance’ shops.”

This is where the passengers deposit their fees, which are then released to the smugglers when word comes that they have reached the Greek coast.

Many shops now sell life jackets. One kebab shop has a dozen for sale, including little ones for children, and there are even a few in a shop that specialises in police uniforms.

But it is the shoe and clothes shops that are really cashing in, with life jackets as their main product.

“We only sell two or three pairs of shoes a day,” says one shop assistant on Fevzi Paa Boulevard. “But we’re still selling between 100 and 300 life jackets. In the summer, sometimes it was a thousand. The factories couldn’t keep up.”

The blatant nature of the smuggling has led to perceptions that Turkey turns a blind eye to illegal departures from its western shoreline. Turkey not only bars most Syrians from legal work, giving them little incentive to remain in the country, officials also appear to do little to stop their movement.

The hotels and shops are between two police stations less than a kilometre apart, but police only sporadically respond to an event.

There is a similar permissiveness in the coastal town west of Izmir that acts as the springboard for smuggling trips to the Greek island of Chios. Taxi drivers there are wary of taking passengers to the departure points, for fear of being arrested for smuggling, but the beaches are unguarded and accessible to all.

The Turkish government rejects these criticisms. It says police have arrested more than 200 major smugglers since last year and turned back nearly 80 000 of their passengers. The country hosts 2.2-million Syrian refugees.

“We’re doing everything in our power to stop the flow of refugees and prevent casualties,” said a government spokesperson. “But they try again and again if they’re caught.”

A woman is overwrought during the crossing to Lesbos. (Aris Messinis, AFP)

The numbers certainly bear out. The flow of refugees has fallen since October, when up to 10 000 were leaving for Greece every 24 hours, but remains high. After a few days’ lull because of bad weather, the daily departure rate nearly hit this 5 000 again last week, according to the Greek government.

“The main reason is the explosion of the war,” says Khalil, who argues that recent Russian airstrikes in rebel-held Syria have made the situation even less liveable.

The second factor is that it has become cheaper for refugees to leave. Two smugglers said the cost of a seat on an inflatable boat to Greece has fallen from $1 200 in September to $800 in recent days. “People who didn’t have the money before – they can come now,” says Khalil.

Some are driven all the way from Istanbul, but it is easier to start from Izmir or Bodrum, a smaller Turkish resort town further south known for its hotels and beaches, because of the shorter drives to where smugglers launch their boats.

In Izmir, the warren of streets surrounding the Fevzi Paa Boulevard is full of brokers sidling up to Syrians, who are easily identifiable by their backpacks and visible nervousness, and offering them trips to Greece.

Once a deal is struck, they are hustled into shabby hotels that the smugglers often block book. Late at night, the smugglers arrange for trucks and buses to drive them for a few hours through the darkness to the shore.

Each smuggling network operates in broadly the same way. Brokers like Khalil find the 40 or 50 passengers needed to fill each boat and keep them in the hotels until departure.

Then there are the drivers who bring them to the shore, and the workmen who deliver the rubber boats and engines and assemble them at the departure points.

If the passengers are mainly Syrian, the network will probably be staffed by Syrians, usually working for a Syrian boss. But that boss will also need Turkish partners, such as the landowners who control the beaches. Typically, the landowners work with several networks and take a significant cut of their profits. Their complicity is crucial to the smugglers’ success.

“You can’t just leave from anywhere, so the Turkish guy is the major player,” says Khalil. “Without him, the trips wouldn’t take place.”

Another smuggler says his group rents beaches from several different landlords, to give themselves the option of sending people to different Greek islands and to change locations at the last minute if the police suddenly appear.

During the September peak, the most expensive boat cost $8 500 and the engines cost $4 000, although prices have fallen. The mechanics and the driver need another $4 000, and a hotel room for refugees costs $500 a night.

The beach owners often charge a 15% levy on every passenger’s fee, meaning that they pocket around $6 000 a boat.

The lead smuggler is left with at least $13 000, but can double his profit if he undercuts his brokers and squeezes onboard another 10 passengers. Many cram in 50 passengers rather than the promised 40 and send the boats off without enough fuel. Migrants who get cold feet on the beach sometimes report that they are forced on board at gunpoint.

Still, people keep coming. Despite the worsening weather and the fallout from the Paris attacks, thousands are still leaving shores near Izmir every day.

To Khalil, it is obvious why. Most Syrians cannot work legally in Turkey and the war is getting worse in Syria. “They know about Paris but they’re desperate,” he says.

Khalil should know. In the days ahead, he will finally try to get to Europe himself. – © Guardian News & Media 2015. Additional reporting by Abdulsalam Dallal

As the UN met to discuss the refugee crisis, one Syrian family was desperate to reunite