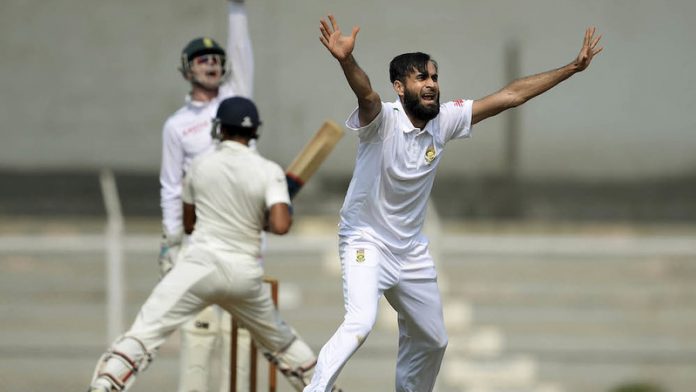 A glimpse into the future of South Africa’s Test XI was considerably clearer than the Delhi skyline on Thursday morning as the fourth and final Test match began at the Feroz Shah Kotla Stadium in the second-most polluted city in the world.

It was almost impossible to see where the sun was behind the lid of toxic fumes above the stadium, but there was enough light to see off-spinner Dane Piedt take four wickets before tea, Temba Bavuma provide the energy in the field so often lacking in the series so far and veteran leg spinner Imran Tahir once again consigned to the back seat.

Piedt was a surprise inclusion ahead of Simon Harmer, who played in the first three Tests, but justified his selection as much with an obviously calm temperament as with the wickets that helped reduce the home side to 139-6.

Fellow off-spinner Harmer is perceived to be the more economical, “controlling” bowler of the two, whereas Piedt has more variations, including a carom ball that turns the “wrong” way – although not as dramatically as the doosra.

Tahir, meanwhile, was again offered a minor role by captain Hashim Amla and was removed from the attack after just two spells of two overs each. The last time South Africa carried a bowler in similar circumstances was when a young Paul Adams played in the late 1990s. Captain Hansie Cronjé used him as a strike bowler in short spells in an attempt to maximise his wicket-taking ability but limit the damage from an abnormally high number of bad balls for a Test bowler.

At that stage, the Proteas routinely carried a six-man bowling attack with no shortage of quality all-rounders. Here in Delhi, Tahir was chosen, in a gamble brave enough to be described as stupid, in a four-man attack.

Like the smart pair of shoes and linen shirt you pack for a backpacking trip around Asia – “just in case we get invited out somewhere nice” – Tahir has been a luxury item in the Test XI and Amla admitted as much both after the series loss in Nagpur and again before the final Test here.

“In my experience he tends to leak a few runs; that’s just the kind of bowler he is,” Amla said. “He bowls some good wicket-taking balls but when you are behind the game, as a captain, you tend to go for someone who can provide you with control.”

In other words, if South Africa had 400+ on the board and the pitch was starting to “do a bit” for the spinners and runs didn’t immediately matter, then Tahir is exactly the man Amla would turn to. For a while. Until he had bowled too many full tosses and not taken enough wickets.

It certainly looked peculiar when Amla delayed Tahir’s introduction to the attack in the second innings in Nagpur until India were fully 218 runs ahead with eight wickets in hand. The game was 99% gone from the tourists and the Indian batsmen began to play like that, too. Tahir took 5-38 in no time at all and the smart arses all raised their eyebrows at Amla.

“If I’d known that he was going to take five wickets, I would have opened the bowling with him,” said Amla with a barely discernible touch of exasperation. “There were a few other factors, like the Indian batsmen playing a few shots …”

Indeed there were. A thin edge cutting a wide, slicing a wide half-volley to backward point, a slog to long-off, a bizarre bottom edge on to the keeper’s boot that bounced to slip, and a heave from the number 10. Hardly the bamboozling work of a genius leg-spinner.

It is Tahir’s fourth shot at the Test team and, unless there is an unexpected injury to either Harmer or Piedt, or a leaked story from the England camp later this month revealing mass therapy sessions for leg-spin aversion, should be his last.

He remains superb in the one-day international team, having reached number one in the rankings and having been named in the International Cricket Council’s team of the year, but he is three months short of turning 37. He continues to defy those years, but cannot do so forever. Especially not when his age is luxury enough, never mind his role.

Bavuma has been given what they call in rugby a hospital pass by being called into the XI as an opening batsman in place of Stiaan van Zyl, who has looked more bewildered than most facing India’s spinners. He scored an excellent half-century on debut in Bangladesh in August and was probably unlucky to be left out, but at least he will have the “luxury” of facing half a dozen overs of seam bowling at the top of the order before Ravichandran Ashwin and Ravindra Jadeja take over with spin.

South Africa have put India in apparent trouble before in this series only for their final total to be a great deal more valuable than at first sight. But this pitch, although infuriatingly slow, is far truer than the rubble laid out in Nagpur.

They made a good start in their quest to return home with pride restored and a 2:1 scoreline rather than 3:0.

The South African side showed a mixed bag against England in the ODI series, and now have three T20s to build on the positive aspects
Read more
Advertising
Continue to the category
Coronavirus