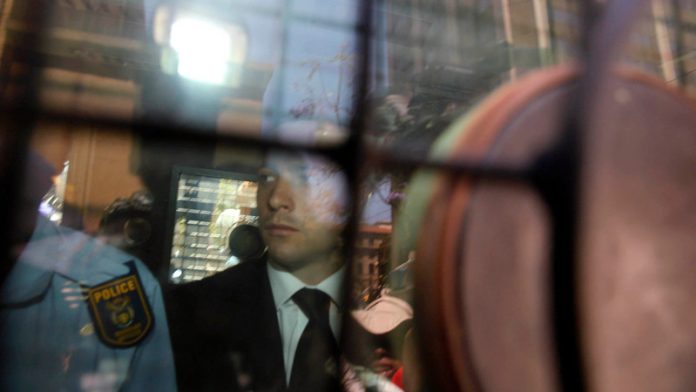 Oscar Pistorius could be back in jail as early as Tuesday morning if a bail hearing does not go in his favour.

The North Gauteng High Court will decide whether to return the athlete to prison immediately or grant bail until a new sentencing next year. Pistorius will attend the hearing.

Last week the supreme court of appeal found him guilty of murder for the killing of his girlfriend Reeva Steenkamp, overturning a previous conviction for culpable homicide.

Pistorius was originally sentenced to five years in prison. In November he was released into correctional supervision at his uncle’s house in Pretoria to serve the remainder of his term. In South African law, the minimum sentence for murder is 15 years in prison, unless extenuating circumstances can be proved.

Pistorius’s sentencing hearing is expected in the second quarter of 2016. Until then, he is likely to remain confined at his uncle’s house or be returned to prison, depending on the court’s decision on Tuesday.

The National Prosecuting Authority (NPA) had been expected to request a warrant for Pistorius’s arrest to guarantee his presence, but his lawyers agreed that he would appear on Tuesday on the basis of “voluntary surrender”. The NPA did not indicate whether they intended to oppose bail or not.

The hearing should offer clues as to whether Pistorius intends to appeal against his murder conviction in the constitutional court, and if so on what grounds.

According to local media reports, Pistorius is terrified of returning to prison. “I don’t want to go back to jail. It’s a terrible place, so disgusting you can’t imagine,” he reportedly told Kevin Lerena, a friend. Lerena said he was worried that Pistorius may “do something stupid” if he is incarcerated again.

The country usually exports 10 000 tonnes of the crop each year. But Covid-19 rules have stopped the trade and are ruining farmers
Read more
Opinion

The ANC has a solution for cadres: Wait until the next news cycle. Rinse. Repeat.
Read more
Advertising
Continue to the category
Coronavirus