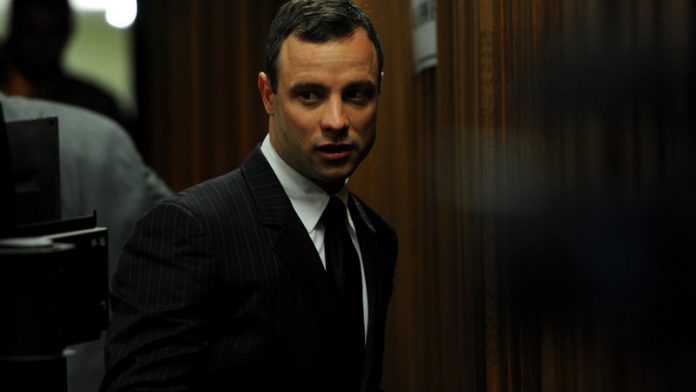 Pistorius will only be allowed to travel within a radius of 20km around his uncle’s Waterkloof home, where he was previously serving under correctional supervision for his overturned sentence of culpable homicide.

“The case is postponed to April 18,” Ledwaba said.

Pistorius’s lawyer Barry Roux earlier told Ledwaba that an application for leave to appeal would be brought to the Constitutional Court, and if that was unsuccessful he would return to the high court for sentencing.

Prosecutor Gerrie Nel said: “We acknowledge he has the right to bring that application … We’re not convinced that the accused has made out a good case and that his application to the Constitutional Court will be successful.”

Bail arguments
When Nel was discussing having “serious” bail conditions, he mentioned Pistorius’s links with countries like Italy. In response to this, Pistorius sneered and then chuckled while rubbing his eyebrow.

Nel said earlier that the State would agree to a bail amount of R10 000.

“The accused does not have the means to pay a higher amount of bail,” said Nel.

Pistorius’s culpable homicide conviction was overturned for a stronger conviction of murder by the Supreme Court of Appeal (SCA) last week in Bloemfontein.

He faces a minimum of 15 years for the murder, unless he provides substantial and compelling reasons to the high court to deviate from that.

The SCA’s ruling came almost three years after Pistorius shot and killed Reeva Steenkamp, later stating he mistook her for an intruder. He fired four shots into the door of a toilet cubicle in his Pretoria home on Valentine’s Day in 2013.

He served one sixth of his five-year sentence in prison and was released in October to serve the remainder under correctional supervision. –  News24

‘My victory should help all women’