Africa will burn after timid talks at COP21 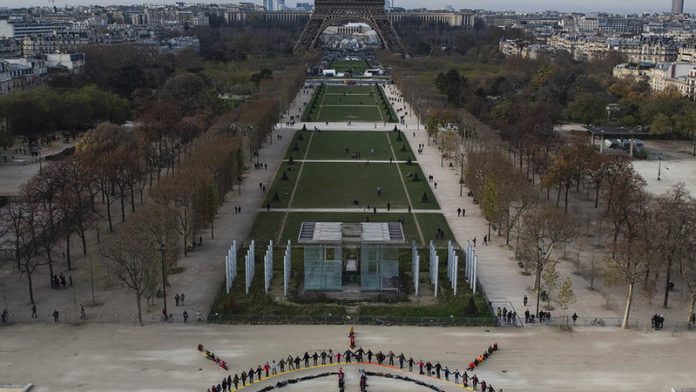 The time for dreams, hopes and aspirations is over. Political imperative has won the day and now all that remains is for countries to swallow their ambitions and accept a weak Paris climate agreement – one that guarantees that the Earth will be 3°C hotter this century. That number is catastrophic. In South Africa it means an interior 5°C hotter than now, devoid of rainfall, grain and livestock.

But it was always going to be this way. COP21 – the 21st meeting of the Conference of the Parties to the United Nations Framework Convention on Climate Change – is the climax of a two-decade attempt to achieve the impossible: get 196 countries to agree to save themselves by putting aside their differences.

The mathematics of it is straightforward. Spend some money now on a greener economy – which in itself will drive a whole new industry – or spend a whole lot more dealing with the damage a changing climate will do to the economy.

The influential 2006 Stern Review broke it down like this: lowering carbon emissions now would cost 1% of global gross domestic product (GDP) and not doing anything would cost up to 20% of global GDP each year simply in dealing with the damage caused by climate change.

Similar thinking led world leaders to create the UN climate change framework in 1992, which would be legally binding and contain key goals, such as the need to ensure average global warming does not exceed 2°C – but it is already halfway there.

Its first success was the Kyoto Protocol in 1997. This top-down agreement saw industrialised countries committing to lowering their carbon emissions by a certain amount.

In a binary economic world this was simple – the developed world accepted its role in generating the majority of carbon emissions and agreed to do the most to lower them, while helping developing countries to follow a less carbon-intensive model. This system was a product of a post-communist world, in which the framework convention codified the world into Annex-1 (developed) and non-Annex-1 (developing) countries.

But then the economies of China, India and Brazil exploded. They found common ground – together with South Africa – and formed the Basic negotiating bloc, which began to dominate COP talks as they sought to defend their high-coal development pathways.

Led by China, it sank COP15 in Copenhagen in 2009 – the last time an agreement to lower emissions was on the table. Ambitious targets were thrown out and, at the end, it took world leaders in a locked room to salvage a political victory – with large countries promising to lower their emissions by a voluntary amount.

South Africa’s plan to lower emissions by 42% by 2025 comes from this, although it is not legally binding. That moment so soured negotiations that it took a tremendous rally from a developing world and European Union alliance in Durban at COP17 to salvage the process.

The Ad Hoc Working Group on the Durban Platform for Enhanced Action provided a timetable – four years of negotiations, to end in Paris in 2015 with an agreement to tackle climate change. Each country was also compelled to submit its climate plans prior to Paris, in the form of what were dubbed intended nationally determined contributions. These were to provide a road map for how each country intended to lower its emissions and build resilience to the changing climate. But, put together, these plans only do enough to keep global warming to just below 3°C this century.

Giving urgency to proceedings, the Paris meeting started during a period of unprecedented temperature increases – with 2015 on course to be the hottest year ever recorded, and 10 months this year have set their own temperature records.

An unprecedented 150 world leaders gave vitriolic speeches, extolling the virtues of climate action now. China and the United States led the way, showing how their national circumstances – catastrophic air pollution in China and a moratorium on climate legislation in the US – now meant they would support an agreement. But that was just politicking.

Negotiators then sat down to tear into a draft climate change agreement. The product of months of negotiation, this draft still arrived in Paris littered with hundreds of square brackets – outlining all the possible options. Negotiators had a week to whittle this down to a few sticking points, before the arrival of national environment ministers in the last week. The scientific imperative would then be handed over to politicians to work out what could be traded to reach a compromise deal.

Much of this happens in large plenary sessions at the converted airfield outside Paris that is being used for negotiations. But the real decisions are taken in small huddles in the corridors and in poorly ventilated rooms, where a handful of sweating ministers have candid discussions about what each side is willing to compromise on. They then hold press briefings, where ministers put across the message they want the world’s media to publish – all with the objective of telling each other on another platform what they are unwilling to trade on.

When this does not work, negotiators sit together on the bus back to their hotels – or in coffee bars – and trade square brackets. In the past week this saw a 40-page draft cut down to 29 pages. The urgency of Friday’s deadline – and all-night discussions held by sleep-deprived officials – has cut the sticking points down to the fundamental differences that have bedevilled every COP in the past decade. Getting around these will be the key to a Paris agreement.

The critical groups now are the US (which wants an agreement but one that its Senate does not have to ratify); the EU (which wants an ambitious agreement to justify its years of spending on renewable energy); oil-rich countries such as Saudi Arabia (which want the weakest agreement possible to secure their oil revenues); the poorest and most vulnerable countries, such as island states (which want loss and damage funds to cover the fact that their countries are already suffering from climate change); and the Basic countries (which want to avoid responsibility for their growing emissions, while still getting funding from developed countries to adapt to climate change).

Each one of these has intractable demands that will either derail the agreement or – in all likelihood – see the pact come out so weak that it does little more than get countries heading in the same direction.

In simple terms, Europe and most developing countries want an agreement that keeps the world less than 1.5°C hotter. But those nations want finance for the damage resulting from that change, and Europe is loath to give it because China and India will have access to it.

The EU and the US want the basis for future climate action – the intended nationally determined contributions – to be reviewed every five years as technology matures. This will allow the 3°C warming guaranteed by current contributions to be ratcheted down.

The Basic group largely rejects this – particularly India, which is going through a boom in coal-fired power generation. The group is instead focused on the Green Climate Fund, which developed countries set up after the Copenhagen COP to disburse $100?billion a year in climate funding.

The developed world says $60?billion of this has been raised, but India has rejected the accounting behind this figure. And although most parties want the agreement to be legally binding, so that countries have to do as they promise, the US has consistently argued against this, saying voluntary agreements work.

These differences are fundamental. The lofty rhetoric is there – US President Barack Obama warned that “we are the first generation to feel the effect of climate change and the last generation who can do something about it” – but the reality of getting 196 countries to agree to a single plan means nobody wins.

The draft agreement has still not settled the major disputes. The following is a critical segment for Africa, where science says temperatures cannot be allowed to rise more than 1.5°C. Square brackets – indicating disagreement – and multiple options are scattered throughout the text.

1. The purpose of this agreement is to [enhance the implementation of the Convention and to achieve its objective] [further implement the objective of the convention set out in its Article 2 [through enhanced action, cooperation and support]] so as:

(a) To hold the increase in the global average temperature to

Option 1: below 2°C above pre-industrial levels

Option 2: well below 2°C above pre-industrial levels [and to [rapidly] scale up global efforts to limit temperature increases to below 1.5°C] [,while recognising that in some regions and vulnerable ecosystems high risks are projected even for warming above 1.5°C]

Option 3: below 1.5°C above pre-industrial levels.