How SA chased the Chinese dragon 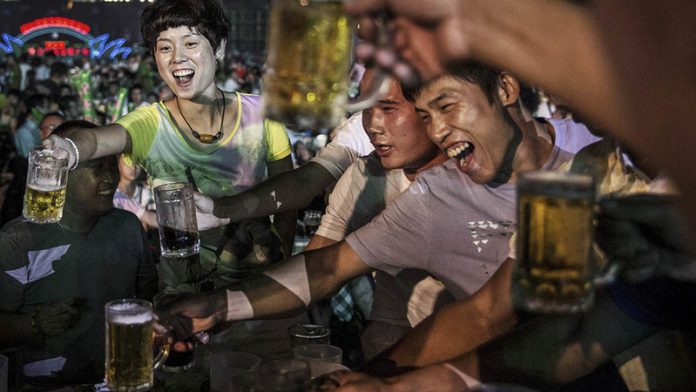 What would you guess the world’s most popular beer is? Budweiser? Castle, perhaps? In all likelihood, you have never heard of the brand that sold 9.28-million kilolitres of beer in 2010. The best-selling beer in the world is Snow, or Xue Hua. It is made and sold exclusively in China, although it owes much of its success to SABMiller.

Years before South African Breweries (SAB) and Miller Brewing joined forces in 2002, SAB began making eyes at China. It was the late 1980s and years before South Africa and China had anything but unofficial – and somewhat antagonistic – relations. South Africa was still a pariah state, enjoying one of very few close relationships with Taiwan. The People’s Republic of China was allied, instead, with the Pan Africanist Congress.

China was in the throes of becoming a market economy and a handful of international breweries began funnelling money into China’s fledgling beer market, hoping to supplant local brands with their own.

It was an extremely competitive and ultimately flawed approach, said SAB’s former global head of communications and reputation, Nigel Fairbrass, in a 2013 interview. “Despite the vast amount of investment, the pricing VAN [value-added network] was absolutely miserable. As a consequence, a huge number of international brewers left and went home.”

In 1994, SAB made its move. It found a Chinese partner and negotiated joint control of a local brewery in Shenyang, a northeastern Chinese city known for its heavy industry and pollution. “We were aware of the fact that moving into the first-tier cities back in the early Nineties was a very tough strategy,” said Fairbrass.

Instead, SAB settled for the region known as the rust belt of northeast China. “That was the genesis of our decision: to buy a local business with a Chinese partner and then to go for the extremely unglamorous second-tier and third-tier cities.”

Years of doing business in South Africa had given SAB invaluable experience in developing markets in multicultural environments, where difficult labour relations were the norm rather than the exception. SAB’s experience put the company in a unique position and it began to move into what Alan Richards, the company’s former global programme director for business transformation, described (in a video on the company website) as “places that were going through change”, where there was “opportunity to move in quickly and bring the skill and competencies that we had from South Africa”.

SAB bought up an average of one or two Chinese businesses each year, overhauling existing infrastructure to better use local breweries’ production capacity. Partnering with China Resources Enterprise, the makers of Snow, they formed a joint venture – China Resources Snow Breweries Ltd, or CR Snow – which went on to become the fifth-largest brewery in the world.

Tencent
Another South African company with an equally large appetite for emerging markets was close on SAB’s heels: Naspers, Africa’s biggest media company. Theirs was a far longer path to success, but it has more than paid off. Today, if you visit the glass skyscraper where the world’s fifth-largest internet company, Tencent, is headquartered, you might spot a photograph of Naspers’s chief executive of internet listed assets, Charles Searle, on its second floor. He was photographed with Ten­cent’s other board members shortly after Naspers acquired a 46.5% interest in the company for $32-million in 2001.

Tencent operated an instant messaging platform called QQ, and had just made its first profit after turning a loss for three years.

Naspers’s stake has since been diluted to 34%, but is worth about $65-billion today, a staggering 95% of its market capitalisation on the JSE.

But Naspers didn’t hit the ground running in China, either. Reaching this point came after several years of “school fees”, said Searle.

The first team of intrepid Naspers employees landed in China in the mid-1990s. The country was still slowly recuperating from an era of backward policies, during which the state controlled everything from business to people’s hairstyles. Naspers was among the very first foreign media companies in Beijing. “It was all bicycles in the streets,” said Searle.

He was among the first to join Naspers’s China team, which initially looked at developing a product for the pay-TV market after the company’s success with M-Net and DSTV at home. China may have been far behind South Africa in many respects, but television had arrived in the country 18 years before the National Party allowed the disseminator of “communism and immorality” into the country in 1976.

Nevertheless, it was far too early for a model like M-Net to work in China. The company dabbled in a few other ventures, among them a “Walled Garden” content portal and internet service provider (ISP), which it modelled on AOL, but none of them gained traction.

By the late 1990s, China’s economy was growing rapidly. The string of initial failure convinced Naspers to change its approach and began to look for local entrepreneurs to back.

The dotcom crash of 2000 had shaken many internet businesses, and IDG Ventures, one of the earliest investors in China’s internet, was among those hit by the crash. IDG invited Searle to review a portfolio of their companies at a meeting in Beijing. IDG had a portfolio of around 50 investments, the majority of which were start-ups run by graduates from Qinghua University, northern China’s equivalent of Oxbridge, and a “hotbed of innovation”, said Searle. Among the companies in the IDG portfolio was Tencent – or OICQ, as it was initially named. “We sat down and the name jumped out,” he said.

The start-up was already on Naspers’s radar. Unlike many of the other companies in the portfolio, Tencent was based in southern China – in Shenzhen, China’s inaugural special economic zone.

When Tencent launched QQ in China in 1998, the instant messaging service was the first of its kind. The company’s founders had backgrounds in computer science, and the software they developed had parallels with MSN: people could send messages to each other’s computers, and see who was online.

But its stroke of genius was creating a function that allowed users to send messages from PCs to mobile phones, and between mobile phones on different networks, at a time when there was no SMS interoperability between the country’s two mobile phone networks. Tencent plugged that gap.

Naspers’ biggest challenge, said Searle, was convincing Tencent’s founders that “an unknown little South African company” would be a worthwhile partner. But, along with the perceived disadvantages, there were benefits to doing business with a South African company. For one, the fact that Naspers wasn’t American- or British-owned allayed fears of spying.

And, although online censorship was still in its infancy, being complicit in China’s increasingly rigorous system didn’t affect a South African media corporation in the same way as it would later affect a company such as Google. The American multinational pulled out of China in 2010, in response to mounting reputational damage.

Tencent wanted a partner, not just an investor. It recognised the value of the expertise Naspers brought to the table from years of running South Africa’s second-largest ISP, MWeb.

Naspers’s years in China must have also taught them a thing or two about the art of building business relationships, long before Xi’s 2014 anti-graft campaign attempted to put the brakes on the wining, dining and gift-giving that dominates Chinese business culture. Naspers spent over a year hammering out the details with Tencent’s founders and their venture backers. The two companies sealed the deal in 2001 and did not look back.

By the mid-2000s, the economic landscape in China was changing, and going to China to make your fortune was not the opportunity it had once been. But with the country’s soaring economic growth came increasing potential for new markets, and private health insurance was one of them.

Decades of social security under communism had conditioned people to rely on the state’s “iron rice bowl”. But, as communism and socialism became less accurate labels for China’s system of government, so the gap grew between the standard of healthcare expected by an up-and-coming middle class and what the state provided.

Discovery saw its chance and set about convincing the country’s leading insurer, PingAn Insurance Group, that it had the expertise to help pioneer China’s burgeoning health insurance market.

PingAn wanted to partner with a specialist health insurance business like Discovery but, after a few erratic meetings, the discussions petered out. Then, quite suddenly in 2008, PingAn became serious about the partnership.

“It happened very quickly, which for any corporate deal is surprising – and especially in China,” said Scott, now well established in Discovery’s Shanghai office, in a skyscraper owned by the Chinese heavyweight.

Discovery first sent a team to Shanghai in September 2008, armed with instructions on how to avoid offending their potential business partners. “We tried to be rigorous – you know, getting advice, and so on … Luckily, we had a Chinese guy on the team that did the initial market due diligence and he gave us pointers,” said Scott. “PingAn asked us to put together what they called a strategic paper, describing to them what Discovery saw as a vision for health insurance in China.”

They submitted the paper in December 2008 and, by March 2009, PingAn had reached a decision: “They wanted to pursue Discovery seriously.”

By July 2009, PingAn had sent a team to South Africa to begin contractual discussions and within a year the two companies had reached an agreement.

“I think it was simpler because Discovery was a small business,” said Scott. “And for that reason there wasn’t a lot of discussion around price or economics. Discovery would be enjoying massive potential future growth, but it would be bringing a lot of IP [intellectual property], and the deal’s logic was that those two offset each other.”

Discovery paid what Scott describes as “a small margin” for its 24.99% stake. It was intellectual property that PingAn wanted, not its capital.

Much of the negotiations were on making sure that PingAn got full access to Discovery’s specialist health insurance expertise, while their IP remained protected.

Discovery arrived in a very promising economic landscape more than 10 years after official relations between China and South Africa began. But entering the Chinese market at this relatively late stage may have been more challenging. Establishing a commercial contract with PingAn, a behemoth with close affiliation to communist party leaders, was no small feat.

The rest is history. By late 2014, Discovery was growing its individual health insurance business in China by about 300 lives a day, its chief executive, Adrian Gore, said.

Quoting research from the United States consultancy McKinsey & Co, Gore said insurance penetration in China was expected to constitute as much as 5% of gross domestic product by 2020.

Claire van den Heever is an independent writer focusing on Sino-African relations. This article was made possible by a grant from the China-Africa Reporting Project, managed by the Journalism Department of the University of Witwatersrand.