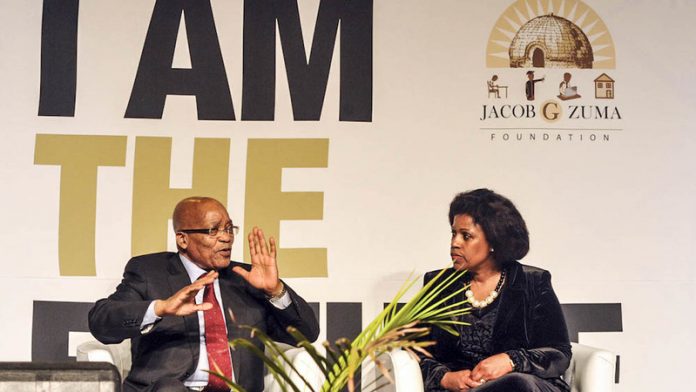 A heap of wreckage lies behind SAA chairperson Dudu Myeni. It includes officials, company executives, board directors and three Cabinet ministers – all of whom clashed with her.

At the top of the heap lies Nhlanhla Nene. President Jacob Zuma “redeployed” him on Thursday, an outcome that appears to have been written last week when the then finance minister issued a public statement rebuffing Myeni’s ambitions for a revised aircraft deal.

On the day, a person with bitter experience of Myeni’s ways offered a confident prediction: “Nene is history. That woman is powerful. She will get Nene shifted. If he doesn’t do what she wants, he will be shifted.”

The source of Myeni’s power is the stuff of speculation, mostly pointing to her acquaintance with the president. Among other things, she chairs his Jacob G Zuma Foundation, where she is joined by her SAA board sidekick, Yakhe Kwinana.

Myeni first joined SAA’s board in late 2009. Her early years were unremarkable.

Former JSE chief executive Russell Loubser served alongside her. Asked recently by the website BizNews if she had “business acumen”, he responded: “Well, if she has, it’s well hidden because I served on the board with her for three years.”

Myeni’s first high-level SAA prang occurred just after she became chairperson in 2012. The casualty was the airline’s acting chief executive, Vuyisile Kona. She had SAA security spy on him. He argued that Myeni’s board was interfering, but he was removed and replaced as chief executive by Monwabisi Kalawe.

The then public enterprises minister, Malusi Gigaba, urged the SAA board, which reported to him, to fix up its troubled governance.

It was not long before Myeni was on a collision course with Kalawe. In May 2014 she accused him of serious governance breaches, which he disputed.

Gigaba was not convinced and publicly proclaimed his “full confidence” in Kalawe. The minister said he would “deal with” Myeni. Less than a week later, Zuma shuffled Gigaba off to a different ministry.

Kalawe’s affidavit in a later labour court case detailed the tension. He explained how he and Myeni met with Gigaba: “When Myeni eventually arrived at the minister’s home, he was very critical of her conduct and spoke harshly to her. This precipitated a breakdown in the relationship between Myeni and the minister.

“I believe that it was as a result of this breakdown that minister Gigaba was ultimately removed as minister of public enterprises and redeployed to the department of home affairs.”

Meanwhile, another Myeni-centred wreck unfolded in slow motion. In January 2014, while Gigaba was still the minister in charge of SAA, six nonexecutive directors wrote to him to raise their “major dissatisfaction” with Myeni’s leadership.

They reportedly said Myeni had intervened in major decisions, resulting in enormous cost implications for SAA.

Myeni survived this one too after Lynne Brown replaced Gigaba and axed the chairperson’s six critics – all Gigaba appointees. Only Myeni and Kwinana were retained.

Brown told journalists she did this on “advice” from Zuma.

Kalawe was the next to fall when Myeni suspended him, leading to the seemingly untouchable chairperson’s clash with Brown.

Brown told journalists at the time that she had instructed Myeni to reverse Kalawe’s suspension and had demanded to “hear from them [the board] why they are not listening to me … I could not see any reason to suspend him a week ago. I need to know what changed.”

Myeni ignored Brown and SAA was taken away from her and put in the care of the finance ministry.

Since then, SAA directors Barry Parsons and Tony Dixon have quit, finance chief Wolf Meyer has left the company, and commercial chief has been suspended, as has procurement chief Masimba Dahwa. Myeni is having all of these executives investigated.

Nene, who would not accede to Myeni’s wish to alter a carefully negotiated deal in favour of one involving shady middlemen, is another victim in a long line.

Abracadabra: The magic of Jay Electronica

From live music by the Reza Khota Quartet in Gugulethu to J.Bo’s live, online event, there’s plenty of culture to keep you entertained
Read more
Friday

‘Before Night Falls’: ReArenas breaks down (in) Fidel Castro’s Cuba