Activist art at your fingertips 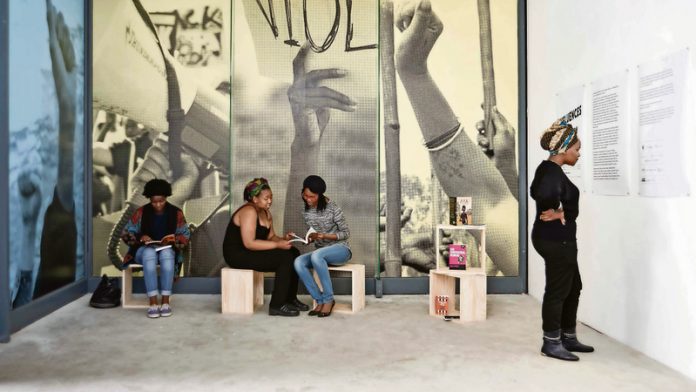 Nail salons in central Johannesburg are a dime a dozen, each one clawing for a bigger portion of the market share and each offering designs of nail art ranging from the sophisticated to the gaudy. For four days in November, 30-year-old British visual artist Phoebe Davies threw her lot into the fray with Influences SA – a nail salon installation where patrons could choose from 20 portraits of influential and inspiring women to embellish their nails.

Influences SA coincided with observance of the nationwide 16 Days of Activism for No Violence Against Women and Children. The nail transfers (essentially, stickers that are applied to the fingernails) were the culmination of three weeks of workshops that Davies had with nine young black women from Sibikwa, a Benoni-based arts centre. The 20 women whose portraits were designed into nail transfers

are exemplary figures in various fields – such as anti-apartheid activist Lillian Ngoyi, songstress Brenda Fassie and World Championship-winning athlete Caster Semenya. But Davies insists that the figures themselves are secondary – acting as illustrations for guided conversations that the workshop participants had over the three weeks prior to the installation.

Davies conceptualised the Influences series of pop-up nail bars two years ago when she led workshops for young women in South London.

“I was working at a centre for people who’ve been excluded from school due to behavioural reasons,” she says. “Every week that I would go back to work with those young women, they had really amazing nail designs. They wouldn’t necessarily see themselves as creative or artistic people, but they were definitely having this output that was clearly very talented and artistic.”

Observing the creativity the women displayed, Davies began to use the nail art culture already entrenched in the women’s lives as a tool for opening political and social conversations. In the subsequent exchanges, the women discussed different aspects of their existences and selected female public figures to represent the various topics they discussed.

A framework for an installation series had been created: Influences was born. The installation – which enables members of the public to get nail transfers featuring iconic women at a pop-up nail bar – has been shown extensively in the United Kingdom, including at the renowned Tate Britain gallery.

Influences is, at its core, a visual art installation project. That fact brings with it potential issues of access and exclusion faced by many visual arts installations in certain spaces. Influences SA was set up in a shop close to the food court at the Newtown Junction mall in Johannesburg. This was Davies’s attempt at being more inclusive of the general public.

She says: “If Influences SA exists in a gallery space, we’d only have a very certain type of person enter that space. We’d only have people who felt comfortable walking into those gallery spaces. I feel that that’s the same, no matter what country you’re from, in terms of how galleries or art spaces operate.”

However noble this attempt, South Africa’s social strata, divided along economic lines, mean that only certain groups of people visit shopping malls. Perhaps a longer run in various locations might have begun to address the issue of exclusion.

The annals of recorded history paint a picture of nail art being used as a marker of social status. In Cleopatran Egypt, for example, women used specific colours to denote their standing in the social pecking order, and the queen had exclusive rights to the use of a certain colour.

It is refreshing that Davies does not purport to hold a solution to misguided opinions on women’s issues. She does, however, recognise her inalienable status as a white woman who had the privilege of attending art school and now makes her living from art.

And when issues were raised in the series of workshops that were beyond her scope as a white feminist woman from South London, she asked for help. Curator Ashley Whitfield and writer Taryn Mackay were enlisted to run workshops on the politics of beauty with the group of women, for example.

Many who have written about Influences succumb to the temptation of labelling it a feminist project, which Davies disputes vehemently.

From the nail salon whose marketing scope is word of mouth and a board at the entrance with photographs of different nail styles to the exclusive “by appointment only” establishments, nail decoration is a form of art with broad social acceptance. Using it as a foundation for creating conversations about political and social issues can be seen as tapping into this plebeian artform with the possibility of creating an inclusive but curated and directed installation.

And perhaps an even more audacious hope is that this project’s execution could inspire greater understanding between different brands of feminism in the service of a greater good.