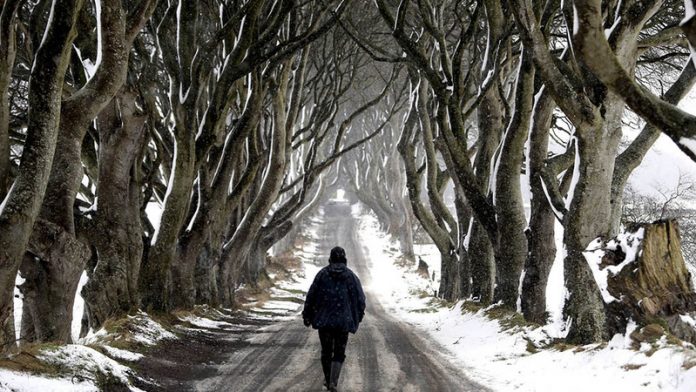 With their plastic swords, shields and medieval cloaks, thousands of “Thronies” are following in the footsteps of the Vikings and launching a fresh invasion of a bucolic corner of County Down.

The premiere of series five of one of the world’s most-watched television dramas sees Tourism Northern Ireland undertaking a major survey of the economic boost Game of Thrones has given the region’s economy. There are about a dozen sets scattered around the province and the impact might fairly be described as huge.

Fans of the series will know that Winterfell – the Stark clan’s fortress – has fallen. But the set in Northern Ireland, where the character Jon Snow was filmed teaching his half-brother Bran Stark how to use a bow and arrow, has become a magnet for fans from around the world.

Recently, visitors were re-enacting Snow’s archery lesson as sunlight bounced off the ancient masonry of the 15th-century mini-castle that was the Starks’s redoubt in episode one.

Norse-named Strangford Lough, which Viking longships once sailed up to pillage and plunder, is just one of the locations across Northern Ireland in which George RR Martin’s books are being brought to the TV screen.

At the Game of Thrones Experience venue – on the National Trust-owned Castle Ward estate, at the southern end of the lough – arrows were hurtling through the air in the archery centre operated by William Kells (aka Lord William of Winterfell).

An instructor and archery coach for Clearsky Adventure Centre, which owns the venue, Kells said: “For me, this is not just about a coaching session, but about putting Game of Thrones into perspective, especially since archery was such a big part of the series.”

Dressed in the black leather costume of a medieval villain, Kells admitted he has had some strange requests from the more fanatical wing of the Thronies fan base.

“Some of them have asked if we can simulate a beheading for them, like in the show, or have them being gutted with a sword. This happens on an almost daily basis! I would be more than happy to do so but can’t, due to health and safety legislation!”

James McKay, group operations manager for the company running this Game of Thrones Experience, said that, from last October to this April, more than 10 000 Thronies had come to shoot arrows, wear the authentic tailored, fur-lined cloaks and even don a replica of the Hound warrior’s fearsome helmet.

“We are now expecting at least two coaches full of fans each day between now and September. Footfall has massively increased and we get people from as near as Downpatrick up the road and as far away as Los Angeles,” McKay said.

While more tourist buses pulled up outside, full of fans looking forward, among other things, to meeting the Northern Inuit dogs that were raised from pups for the series, McKay added: “Since our centre here was first used in 2009 for the pilot, this Game of Thrones tourism thing has snowballed … if you’ll excuse the pun.”

After firing several arrows from the spot where Jon Snow acted as archery teacher, Boston student Kerriann Kelleher said: “I have been a fan of the show since it came out, so being able to put on one of the costumes and shoot a bow and arrow on the set was just an awesome experience.”

The 21-year-old said the staff had even given her a bottle of Winterfell ale, which is made by Farmageddon, a local craft brewery. Tourists can also buy a half groat, a specially minted Winterfell coin, as a souvenir.

Down in Strangford village, even the Cuan guesthouse is cashing in on the Game of Thrones set on its doorstep. It hosted some of the cast during filming, and now organises Game of Thrones banquets, and even offers Direwolf-brand shortbread, stamped with the House Stark family crest.

Tourism Northern Ireland spokesperson Martin Graham said that at least one operator running locations tours, McComb’s Coach Travel of Newtownabbey, has had to increase its service from three to seven days a week.

Graham added: “We recently met a Harley-Davidson biker who was driving the complete Game of Thrones trail in Northern Ireland as a bucket-list goal. He now plans to come back and do it again in full costume.

“And at the Game of Thrones Exhibition in Belfast in June last year, an English visitor flew over to propose to his girlfriend on the Iron Throne [the seat at the centre of the conflict in the series]. She said: ‘Yes’, and this has been our most popular tweeted message and image to date.”

The exhibition of Game of Thrones material last year generated about £2.9-million on its own. The potential for further tourist revenue is enormous, given that the series is screened in 70 countries, has more than 18-million viewers and is followed on Facebook by 13-million fans and on Twitter by 1.8-million.

Other locations used by the show include the Giant’s Causeway, in Northern Ireland, which is a world heritage site and comprises a series of caves at Cushendun, as well as Ballintoy harbour on the Antrim coast. These locations have become, in effect, free tourism advertisements across the globe for Northern Ireland’s beauty spots.

Back in Belfast, in the former Harland and Wolff shipyard’s giant Paint Hall, where most of the interiors in the series are filmed, a camera crew was shooting a Game of Thrones-themed promotion for the tourism industry.

Later, inside St George’s Market a little way up the banks of the river Lagan, they were filming a stall that normally sells local produce. It was offering a new delicacy purporting to be from the dragon-crested clan who were driven into exile: Targaryen-farmed dragon eggs, £125 each. – © Guardian News & Media 2015