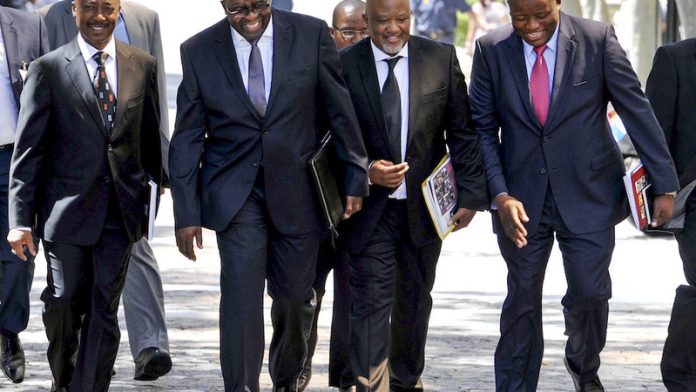 Last Friday, before leaving Germany after a few weeks as guest professor at Mainz University, I should not have tried shopping for Christmas gifts. Such was the free-fall spiral in which the rand was caught that, after a whole day of window-shopping, I could barely afford the customary mug of warm gluhwein at the fairy-tale Christmas market stalls.

I was to learn that my small, temporary, if also privileged, discomfort in Germany paled in comparison with the billions of rands’ worth of stock losses on the JSE triggered by the summary removal of finance minister Nhlanhla Nene and the dire economic consequences of this move.

In hindsight, I should have gone shopping for a bagful of words of indignation – verbs of vehemence, nouns depicting absurdity, barbed adjectives, metaphors, similes and phrases capable of mobilising the most terrible South African invectives.

Words of indignation are a commodity South Africa is fast running out of when it comes to the shenanigans of President Jacob Zuma.

Although I have been critical of Zuma in several dozen articles and interviews, I am one of those who have always held out hope that he might not be the worst president we have had or that he might still surprise us with some positive deeds. I have now given up all hope.

Many are blinded to the true extent of the damage Zuma has done to the country because of the mistaken supposition that he is some sort of representative black person the criticism of whom accrues, by some racial osmosis, to all black people.

A common blind spot regarding Zuma derives from understandable and widespread reverence for the ANC as a liberation movement. There is concern that the ANC should not be reduced to Zuma and his flair for blunder and bluster.

Though it is becoming harder by the day, millions continue to hold the ANC in high regard, if only because many choose to look at the party over a longer time span than the past 10 years during which the Zuma presidency became a reality.

Some have pointed out that Zuma is only an individual and that the efforts of those who wish to see change must focus on structures, cultures, practices and processes. This argument is as good as any chicken- and-egg argument goes. Last week, Zuma showed us how much harm he alone can do to the country in less than four-and-a-half days.

A growing number of people are becoming bolder in asserting that the ANC is one thing and Zuma is another. And yet it is concerning that many ANC leaders, members and supporters all seem tolerant of the association of Zuma and his blunders with the ANC. Indications are that the country has had enough of the Zuma slip-ups.

The removal of Nene from the finance ministry was Zuma’s seventh Cabinet reshuffle since he took power in 2009 and his third in two years. If one adds the Des van Rooyen-Pravin Gordhan swap, we have had eight Cabinet reshuffles in the seven years that Zuma has been head of government. Cabinet reshuffles are clearly his choice instrument of control and management, keeping many ministers and some senior government officials in a permanent state of paranoia and an abiding sense of siyabonga baba (thank you sir).

The result is a low-intensity but perennial stampede in which some may try to outdo themselves and one another in the unspoken competition to demonstrate absolute loyalty to Number One.

Meanwhile, the rest of society slips into a state described by Jean-Paul Sartre, in his celebrated introduction to Frantz Fanon’s The Wretched of the Earth, as a “nervous condition”. Every time Zuma goes abroad, or gets up to read an important speech, conduct a live interview or make a significant announcement, waves of nervous tremors sweep across the nation, citizens fidget, convulse mildly and giggle nervously, all in anticipation of the next blooper.

Those caught up in the conditions of nervousness comprise a broad spectrum of South Africans inclusive of the rapidly diminishing number of neutrals, his detractors and his die-hard supporters, though the last would be loath to admit their share of Zuma angst openly. But some of the outrageous defences of and explanations for the latest Zuma blunder feel so reflexive and so predictable, they can only be sympathetically understood as a form of overcompensation.

One national coping strategy is society’s repeated attempts to seek refuge in humour and sarcasm. Humour is how Ugandans coped with Idi Amin and how South Africans coped with homeland leaders. But this tried-and-tested tactic has not stemmed the Zunami’s relentless erosion of the soil on which the nation’s moral integrity is planted. One of Zuma’s signature characteristics is his ability to laugh through a self-made crisis, even a crisis of deathly proportions.

Yet he who laughs at problems and fellow citizens with childlike abandon brooks neither humour nor sarcasm directed at his person, even when his words and actions are clearly questionable and ridiculous.

Artists such as Zapiro, Brett Murray and Ayanda Mabulu, who have dared to express their dissent in sarcastic artworks, have all provoked hands-off-Zuma protest marches. Some of their works are offensive – precisely what they intended, which is to express their dissent, disgust and anger. When one veteran journalist suggested that Zuma might be a “one-man wrecking ball”, an apology was apparently sent to Number One by his employers.

South Africans have been scrambling for adjectives with which to understand, describe and depict the latest and most expensive Zuma blunder ever. This is not to suggest that the racketeering charges against Zuma, Nkandla and Guptagate have not been costly national disasters. Indeed, the true reputational costs of these and events such as Marikana cannot as yet be fully accounted for – we are still paying the price and will be doing so for a long time.

But the Nene removal and the comical attempts to explain it away, followed closely by one of the most spectacular capitulations by a South African president in democratic times – and crowned by what one commentator called the “stunning reappointment” of Gordhan as finance minister – may be truly significant.

Gordhan’s appointment has been welcomed as a positive step. It has also been described as a sign of a massive political defeat for Zuma, as evidence of flip-flopping, shambolic decision-making, the beginning of the end and the launching of his lame-duck period.

Award-winning EWN reporter Alex Eliseev described the appointment of Van Rooyen to the finance ministry as “Zuma’s final insult to a battered nation”. The nation is battered and insulted all right. But can we be sure that this is the last and final insult?

In the wake of the Van Rooyen announcement, editors, analysts and reporters, normally known for their restraint, let rip with a barrage of descriptions of Zuma’s actions. Some of the strong words used were “lunatic”, “idiotic”, “grotesque”, “idiocracy”, “beyond logic” and “shambolic”. As I said, we are in danger of running out of words.

Various individuals and groups have called for Zuma either to resign or be recalled. Neither of the two is likely. Zuma’s pride may have been wounded over Van Rooyen’s four-day stint as minister of finance, but he is still ANC and state president. If there is any truth in him being politically weakened, he could also be at his most vicious, politically speaking.

In the light of recent developments, I have joined those who have been trying to make sense of Zuma’s recent statement about the ANC coming first and the country second. It seems to me that Zuma sees himself as the ANC personified – and regards the ANC as being personified in him, as the incarnation of state and nation, until Jesus returns. It is his version of Mobutu Sese Seko Kuku’s l’etat c’est moi (I am the state). In Parliament, he came close to a reportedly frequent statement of Cameroonian President Paul Biya, in power for more than 33 years, to the effect that “I brought you democracy”.

My sense is that we have deployed most of our artistic, linguistic and metaphorical capabilities to show our indignation at Zuma for his repeated failure to measure up to the office entrusted to him by the ANC and Parliament on our behalf. We have penned the open letters and signed the petitions. Must-fall marches have been added to the pot of strategies. If you will pardon the metaphor, at the risk of repetition, I think we are close to running out of ammunition.

Tinyiko Maluleke is a professor at the University of Pretoria. He writes in his personal capacity. Follow him on Twitter @ProfTinyiko