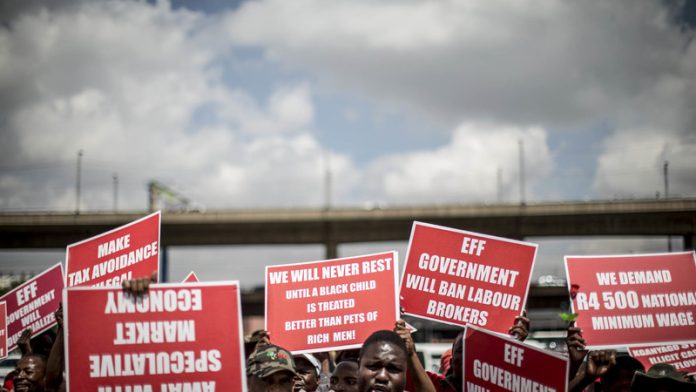 There is a major shift underway in South African society. The order put together after apartheid is breaking apart. The aura of liberation is fading and people are increasingly less interested in romanticised recollections of the struggle. The first break came in the informal settlements. After that it was the mines, and this year dissent spread to the universities.

With the exception of the mines, much of this dissent has been driven by young people. It’s become clear the ruling party cannot assume it will enjoy the youth’s support.

The new student politics and the formation of the Economic Freedom Fighters (EFF) are the two most dramatic examples of the way in which support trends are changing. But in the often hidden domain of subaltern politics in places such as informal settlements, it is also mostly the youth that are leading the construction of new organisations outside formal politics.

As has been suggested before, we have the ingredients for an “African Spring”. Fifty percent of South Africans are under 30 and the majority are unemployed and desperately poor. The liberation dividend is fading, but holding for now.

Young people feel trapped by poverty and unemployment. And recent research shows that they believe they have missed post-liberation opportunities. Much needed recent work by political scientist Susan Booysen suggests that the second cohort of born-frees (those aged 18 to 24) believe that the cohort of born-frees before them (those over 24) have taken up available employment opportunities.

In this context of unemployment, we know that political participation also occurs outside electoral processes, especially through protest, as we have seen in recent years. No doubt South Africa remains the most protest-rich society in the world.

But many people are also wondering how the “youthquake” will affect the coming local elections and the national elections of 2019. In previous elections, a large proportion of the youth have either not registered to vote or have not voted at all.

But now that the “youthquake” has excited so many young people about politics, that may change. Those commentators who assume that the EFF will necessarily be the beneficiary of this are being a little too glib.

All the evidence from elections and by-elections so far shows that the EFF’s support is regionally concentrated, in Gauteng and parts of the north, and that it has a clear ethnic character. The EFF has minimal support in cities such as Durban and Cape Town. And at universities such as Fort Hare in the Eastern Cape and the Nelson Mandela Metropolitan in Port Elizabeth, both with a largely black and working-class student population, students have stunned many by choosing to vote for the Democratic Alliance.

It’s too early to offer predictions as to how the “youthquake” will affect the next election. But at the moment it seems likely that some young people will not vote, that the ANC will lose its overall share of the youth vote and that the DA and the EFF will pick up votes – with the DA doing well in the Eastern Cape and the EFF doing well in parts of Gauteng and the north of the country.

All indications are that the ANC will retain its hold on the electorate in rural areas but it will continue to lose support in urban areas. But the election of new provincial ANC leaders in KwaZulu-Natal may have some ramifications for ANC support in deep rural areas – but this is a subject for another day.

South Africa is an overwhelmingly urbanised country and this means that the party’s hold on power will not be sustainable if it doesn’t find a way to win back urban support. Our country is also overwhelmingly youthful and if the ANC does haemorrhage youth support, a major rethink will be required if it wishes to still hold power in 10 years’ time.

Land and housing are the major factors driving protest in informal settlements. In universities, the major factor has been the cost of fees. If the ruling party has enough money, it could buy its way out of its problems by massively increasingly funding to universities and investing in massive urban reform.

But money is running out. Debt is now the largest item on the national budget and with rating agencies driving our investment status ever closer towards junk, borrowing more money is becoming increasingly difficult.

The huge amounts of money spent on parastatals, VIP protection, a grossly bloated diplomatic service, as well as all the money lost to corruption and mismanagement, makes the situation even worse.

Young people have certainly benefited from liberation, but overwhelming unemployment and poverty remain. This will inform the dynamics of youth political participation. We must remember they have what it takes to alter the course of history.