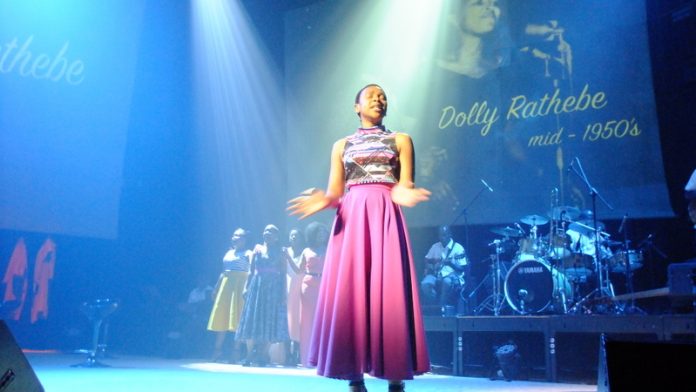 Actor and artistic director of The Market Theatre, James Ngcobo went digging through South Africa’s rich music archives, blowing off some dust on old records, to revive some 1950s tunes for his latest stage musical production, that’s currently showing at The Market Theatre.

Ngcobo’s production, Songs From Jazztown, features compositions by prolific local musicians who were born in Queenstown, also known as Jazztown in the Eastern Cape. Some of the composers and musicians included in the production’s song list include, Gibson Kente, Winston “Mankunku” Ngozi, Victor Ntoni, Miriam Makeba, Dolly Rathebe, Thandiswa Mazwai, Letta Mbuli and Caiphus Semenya.  Jazztown premiered in 2014, where it toured eight little towns around the Eastern Cape as part of the touring fund project by the Department of Arts and Culture.

“We are not celebrating South Africa’s songbook enough,” Ngcobo tells the Mail & Guardian over the phone.

“There is excitement about the phenomenon of the city in the Eastern Cape called Queenstown, that has produced some prolific jazz composers and I wanted to concoct a piece that sees The Market Theatre taking its hat off to these composers. And the idea of these old songs, being sung by young singers in South Africa, in 2015, was really exciting for me.”

Ngcobo has a neck for producing world class stage musicals that successfully give a glimpse of South Africa’s past and present times through song. In 2014 he wrote and directed Ketekang, a musical about celebrating South Africa’s 20 years of democracy. He tied in the local story with events from the African-American Civil Rights Movement that inspired songs and poems. For Ketekang Ngcobo partnered with musical director Tshepo Mngoma, who has worked on productions such as the Gauteng Sports Awards (2014), Ubizane’African Union Summit (2015), Tribute to Maya Angelou (2015) and many more.

This partnership is one of the best things to have happened to The Market Theatre. Ngcobo and Mngoma are constantly staging productions that expose the audiences to some of the strongest vocalists and most talent musicians in theatre. The pair has teamed up again for Songs From Jazztown; the production features multi-talented performers Asanda Bam, Nomfundo Dlamini, Gugu Shezi, Siya Makuzeni, Tshepiso Mashego, and Zandile Madliwa.

Up-and-coming hip hop star Thami Tyam, who is best known as Cass, is the only male performer in the cast. Some may recognise him as one of the contestants on local hip hop reality show, The Hustle.

“We incorporated the hip hop youngster into the show, so that we’d have an interesting collusion of jazz and hip hop. Cass focuses on how it feels to be young and walking through South African streets today,” says Ngcobo. The band consists of musicians Ezbie Moilwa, Mpho Kodisang, Sakhile Nkosi, Ntokozo Zungu and Samuel Ibeh.

Songs From Jazztown is more of a music concert,  you can enjoy in the comfort of the theatre setting. There is no actual dialogue, but Tyam narrates the story and links the different scenes through rapping. The lyrics act as the script of the show. The songs move from the 1950s to 2015, while a video montage of various moments in the South African history plays in the background from scene to scene. The performers do justice to the classic hits.

Each singer brings her own flair to songs that have been covered numerous times. According to Ngcobo, the production team is in talks with “stakeholders” about releasing a Songs From Jazztown soundtrack. Even with the staging of recent musicals such as A New Song, Marikana: The Musical and Ketekang, Ngcobo feels the country needs to make more South African musicals.

“We have always done the West End musicals very well but we need to develop South African musicals. When you look at people like Todd Matshikiza and what he did with King Kong and what Mbongeni Ngema did with Sarafina!, there has been a major effort to produce African musicals and we want to see more and more of them on stage.”

According to him, playwrights are moving towards universal stories that are not just tied to the South African context.

“You are starting to see plays with characters that are coming from neighbouring countries, acting alongside characters coming from abroad, and that for me is the new content of contemporary theatre. We are all looking for the next story to tell.”

In the pursuit of breaking down barriers and boarders through storytelling, The Market Theatre will co-produce the play, I See You, with the Royal Court Theatre in London in 2016.

“This international linkage excites me. The pot has gotten bigger and more exciting; we can now find content from all over the place and bring it to the people,” says Ngcobo.

Songs From Jazztown is on at The Market Theatre until December 20.