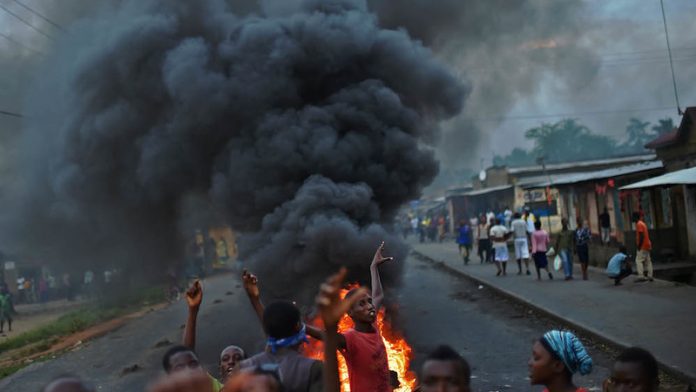 Questions have been asked about why the ANC left out mentioning African countries by name in its January 8 statement, which was delivered by President Jacob Zuma in Rustenburg on Saturday and sets out the ANC’s agenda for the year.

Although he mentioned the conflict in Palestine and the Middle East by name, as well as Western Sahara’s struggle for self-determination, he skimmed over the rest of the continent.

The statement came as conflict in Burundi is escalating and while there is friction in other countries on the continent, including Rwanda, Uganda and the Democratic Republic of the Congo, about leaders there planning to serve more than two terms.

Deputy President Cyril Ramaphosa was also freshly arrived from a conference of the ruling party in South Sudan, where the ANC played a key role in helping to address infighting.

The omission came even after Burundian activist and internationally acclaimed singer Khadja Nin travelled to South Africa to attend the ANC’s celebrations.

She told Africa Melane in an interview on Radio 702 that she came to South Africa in June last year to plead with the AU to “put the Burundi situation on the map”.

The conflict, sparked in April by President Pierre Nkurunziza’s election to a third term in office, has since escalated and 230 000 people so far have fled the violence, killings and disappearances. Nkurunziza has rejected attempts by the AU to intervene.

“I came to try again in this birthday celebrations of the ANC, which is for us in Africa and in Burundi an example of another fight for rights and equality and freedom, and I came here to beg for help,” Nin said.

“I don’t think the solution will come from Europe or the US [United States]. We have to learn to solve African problems by ourselves.”

Minister of International Relations and Co-operation Maite Nkoana-Mashabane later pledged government support for Burundi at the ANC’s gala dinner last Friday and the department has issued several statements on the crisis. But at least two ANC insiders said Zuma’s failure to mention Burundi and other African countries was because of an inexperienced new chairperson of the party’s international relations subcommittee.

“Her grasp and modality and contextualisation of issues is still very weak,” a member of the subcommittee said on condition of anonymity. “We are giving her a chance to learn.”

The committee member also said the body’s input for the January 8 statement was drafted by officials in Molewa’s department. This was corroborated by another party insider, who speculated that the ANC kept quiet on Burundi because South Africa might get involved in future mediation, as it did more than a decade ago.

Molewa did not respond to several calls, SMSes and an enquiry through her spokesperson, Albi Modise. ANC spokesperson Keith Khoza and Bapela referred queries to Molewa.

Yolande Bouka, a researcher in the conflict prevention and risk analysis division of the Institute for Security Studies, said the longer the international community failed to take decisive action in Burundi, the more difficult it would be to salvage the 2000 Arusha peace agreement, which brought an end to the conflict in the country at the time

Zuma was involved in negotiating the agreement as the country’s deputy president at the time.

“The ANC’s history with Burundi demands the party not only remain actively involved in the current process but also take a more significant role in the quest for a political solution,” Bouka said.

“Given the paralysis of the East African Community, which has been mandated to mediate the crisis, the ANC remains one of the few actors with both the capacity and the regional legitimacy to make a strong and positive contribution. What seems to be lacking, sadly, is the will to do so,” she said.