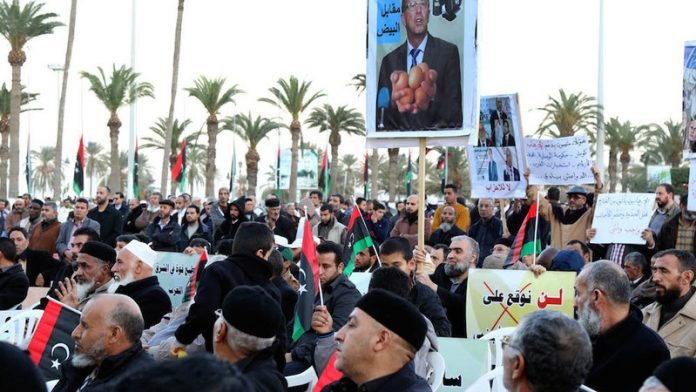 A new United Nations-backed Libyan government has been unveiled and tasked with uniting its warring factions, but rejection by leaders of the country’s two existing Parliaments leaves a question mark over its future.

The prime minister, Fayez Sarraj, has appointed a 32-member Cabinet tasked with ending the civil war, stemming immigration to Europe and halting the expansion of the Islamic State terror group. But for now the government of national accord is based in a hotel in Tunis, capital of neighbouring Tunisia, after Libya was deemed too unsafe.

Sarraj’s government is the result of more than a year of mediation by the UN, whose Libya envoy, Martin Kobler, said: “The … government of national accord is one important leap on the path to peace and stability in Libya. Hard work lies ahead.”

The government’s first task is to persuade the existing Parliaments in Tripoli and Tobruk, at war with each other from opposite ends of the country, to drop their opposition.

After the house of representatives was elected in July 2014, the Islamist-controlled group Libya Dawn seized Tripoli and convened a rival government, the general national congress, driving the democratically elected government east to Tobruk.

The internationally recognised house of representatives meets next Monday to vote on the government, with its president, Aguila Saleh, already signalling his opposition. In Tripoli, militias of the general national congress have warned that Cabinet members risk arrest if they set foot in Libya.

The new Cabinet also faces questions of legitimacy after two of the nine members of the presidential council that appointed it walked out, seemingly invalidating the appointments that were made under the terms of its constitution.

Guma El-Gamaty, a London-based member of Libya Dialogue, the UN-managed body that created the new government, insisted it could bring unity. “This is the best compromise possible to accommodate as many different stakeholders,” he said. “Ninety-nine percent of ordinary Libyans want [it] to succeed.”

Libya’s civil war has left at least 5 000 dead, hundreds of thousands homeless and much of the economy ruined. In the chaos, Islamic State has expanded fast, ringing alarm bells among Western powers this month after launching attacks on the country’s oil ports.

Western powers say the international arms embargo will be lifted once Libya’s factions commit to joining together to battle Islamic State. Britain, France and the United States are also considering airstrikes against the terror group if the new government issues a formal invitation for the bombing.

Britain has offered 1 000 troops to the new government to train a new army and police to replace warring militias. For now, some of those same militias will need to be convinced to provide security if the new government is to move to Tripoli.

“The West has decided to drive through this government in the face of immense difficulties,” said an oil analyst, John Hamilton. “Can it set up in Tripoli? That is the acid test.”

UN support of the new government is a calculated risk. In endorsing Sarraj, it is turning its back on the democratically elected Tobruk Parliament and placing its faith in an appointed alternative. Diplomats say those appointed to the government come from the moderate middle of Libyan politics and, although un-elected, represent a cohesive force that could bring national unity.

The risk is that, without acceptance by the two existing Parliaments, the UN will have encouraged the birth of a third government, worsening Libya’s chaos and making it harder still to bring peace or curb the expansion of Islamic State. – © Guardian News & Media 2016