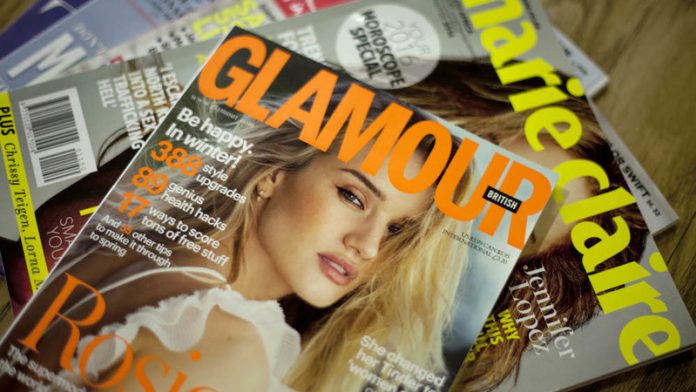 There’s a game my friends and I played as children: we would page through magazines and pick the things we desired and the people we wanted to be. The trick was to be fast, so that you would be the first to pick the most beautiful people, clothes, car and house.

We would flick through old copies of our mothers’ magazines for hours on end, creating these distant futures that we so deeply desired. As far back as I can remember, magazines served up aspirational images of what I didn’t have and didn’t look like but actively yearned for.

Magazines have the power to create cultural norms and they play an integral part in how gender and identity are constructed – and because of this they create a hierarchy of what or who is considered beautiful.

When someone brought a copy of a glossy magazine such as Glamour or Elle to high school it would make the rounds in class, with two or three of us taking turns to read as much as we could in the little time that we had before passing it along to others who eagerly waited their turn.

It was through these moments of my teenagehood that the glamorous lifestyle portrayed in magazines became my holy grail. But the magazines we love do not love us back – they do not contain a diverse representation of black womanhood.

In 2014, entertainer and business-person Bonang Matheba was the first black South African to feature on the cover of Glamour, which had already been in circulation for five years at that time.

Glamour and the South African women’s magazine industry as a whole have been critiqued for marginalising black women even though they form the bulk of their readership.

As part of my honours research in media studies at the University of the Witwatersrand, I conducted a visual-content analysis of how black women were represented in Glamour.

I analysed 12 issues of the magazine, from June 2014 to May 2015, to see how black women featured and how they were portrayed – from the cover to the advertisements.

Black women appeared in only 30% of the 2 699 images I analysed. White women made up 61.7% of the subjects and the remaining 8.4% were images of coloured and Indian women as well as women whose race could not be determined.

Glamour claims that black women make up 65% of its readership, but my research reveals the magazine’s failure to consider black women beyond their role as just consumers.

In her article Ufanele uqavile: Blackwomen, feminisms and postcoloniality in Africa, published in Agenda in 2001, Professor Pumla Gqola writes that “the task of representing black women in postcolonial ways demands from us that we create and refashion forms of representation” – something that is lacking in Glamour and many other women’s magazines in this country.

The images featuring black women leant towards a Eurocentric ideal of beauty in terms of body types and hairstyles, which do not adequately represent the myriad black femininities that exist in South Africa.

My research shows that the majority (65.3%) of black women pictured in Glamour over the one-year sample wore weaves or relaxed hair, while only 7.5% sported braided styles and 20.6% had natural hair.

Long, straight hair is deeply rooted in Eurocentric ideals of beauty – but black hair, in its natural state, does not look that way.

The most common body types in the 12 editions of Glamour I surveyed were of thin, model-types most often associated with a Eurocentric standard of beauty, which is particularly common in magazine culture as a whole and not only specific to how black women are represented.

The lack of diversity in the representation of body types speaks to the skewed perception of which kinds of bodies are considered socially acceptable and beautiful.

In the quest to decolonise our society it is important that magazines also transform and become reflective of those whom they claim are their target market.

My case study focused on Glamour, but the findings hold true for many similar magazines that need to actively reassess their representation of women – not only in aesthetic terms but also in terms of content.

Then maybe one day, when other little black girls play the game of picking the most beautiful women in a magazine, the images will be so diverse that each one of them will see a woman they can aspire to without feeling the urge to change the very nature of their existence – something that I have had to unlearn in my adulthood.