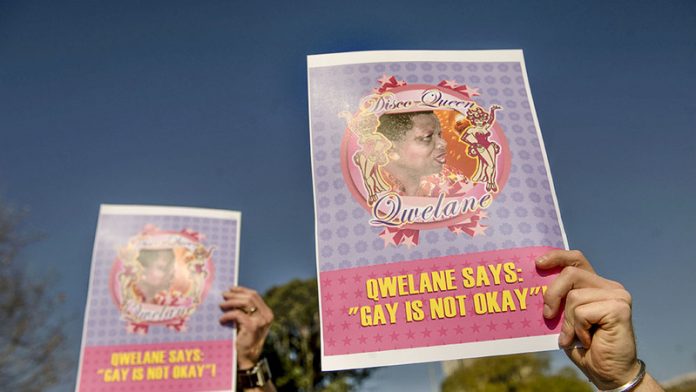 The first – but probably not the last – legal action around the recent Penny Sparrow racism uproar went to court this week, when radio personality Gareth Cliff squared off with one-time employer M-Net. But their fight has little to do with racism, and nothing at all to do with hate speech.

Which is just as well because, thanks to Malema, the issue of hate speech is still relatively undeveloped in law.

In 2011, AfriForum brought a case of hate speech against the then-ANC Youth League leader for singing Dubul ‘iBhunu (“shoot the boer”). In a controversial judgment, Malema was found guilty of hate speech, under the Promotion of Equality and Prevention of Unfair Discrimination Act, known as the Equality Act.

The matter was settled out of court after Malema appealed, and with it went an opportunity to test the definition of hate speech in the Supreme Court of Appeal.

The Act prohibits hate speech on the grounds of, among other things, race, gender and religion.

The debate about what constitutes hate speech has been reignited in recent weeks, after Durban estate agent Sparrow referred to black people as “monkeys” on Facebook. Several potential court cases loom in the aftermath of that incident.

On the one hand, experts say the current jurisprudence on hate speech is problematic because the courts have gradually broadened its definition to the point where freedom of expression is threatened.

On the other hand, it has been argued that hate speech has not been properly targeted by the courts and by various pieces of legislation, and that it needs to be remedied with more aggressive laws.

The judgment against Malema was controversial, particularly because the court barred Malema or the ANC from singing the song in public and private spaces. The Freedom of Expression Institute (FXI) later commented in a 2013 paper that this was a “drastic” limitation of freedom of expression. FXI became involved in the case as friends of the court.

The highly anticipated appeal, it was hoped, would provide clarity on how hate speech and freedom of expression should be balanced.

Malema’s case sparked discussions about whether the audience hearing speech should be a factor in deciding if remarks can be called hate speech. But more generally, hate speech has been defined as such if the words concerned are accompanied by incitement to cause harm.

In 2014, composer Mbongeni Ngema, who wrote the musical Sarafina!, was taken to court over lyrics to a song he’d written which were deemed racist towards Indians.

An interdict was sought against him and Universal Music that would have prevented them from distributing the song. The case was dismissed because it could not be proved that incitement to cause harm had occurred.

Hate speech is not given constitutional protection. The Constitution protects freedom of expression, but it specifically excludes hate speech.

The Equality Court can provide relief for hate speech complainants, while complainants could also seek financial compensation in a civil court. But hate speech is not a crime.

The recent debates around Sparrow’s remarks have renewed calls for hate speech to be considered a hate crime.

Feeding into this is the complaint that the Equality Court does not have enough teeth. It has a wide range of remedies available to it, including financial compensation and ordering public apologies, as well as ordering institutions to change their policies. It can also refer cases to the directorate of public prosecutions for criminal prosecution.

In some cases, its orders have been significant. It recently ordered a Bloemfontein pub owner to pay compensation of R80 000 to a patron who he called a k****r.

But the Equality Court orders have not always been effective.

In 2014, the South African Human Rights Council took Afrikaans singer Sunette Bridges to the Equality Court for comments made on her Facebook page, which it alleged amounted to hate speech.

Bridges’s Facebook page is often used to post information about “farm murders”. Comments on her posts are overtly racist: in one post, where Bridges posted a news story about a “farm murder” committed by “barbarians”, a commentator replied in Afrikaans: “RIP sympathy with the family. The black rubbishes. Dear Lord forgive me that I hate them with a passion.”

The Equality Court found that comments on her page were racist and amounted to hate speech. A court order was issued: Bridges was to regularly monitor her Facebook pages and remove content that was hate speech, and she was to inform her followers that she distanced herself from hate speech.

Just a few months later, in August, Bridges herself referred to alleged murderers as “black savages”.

Facebook posts from the time are notably devoid of compliance with the court order. Part of the problem, according to the FXI, is that the provisions of the Equality Act are overbroad and vague.

Jon Qwelane, a former Sunday Sun columnist, is currently challenging the constitutionality of some provisions of the Act for this reason. Qwelane was found guilty of hate speech for a column titled, “Call me names but gay is not okay”.

The FXI has argued that the Equality Act does not define hate speech as narrowly as it is defined in the Constitution. The Constitution specifically says that hate speech is defined as propaganda for war, incitement of imminent violence, or hatred based on race, gender, ethnicity or religion, and that constitutes incitement to cause harm.

But the Equality Act defined hate speech more broadly to include hurtful speech, allowing for too subjective a view to be taken on what hate speech is. The Human Rights Council has previously argued that hate speech should extend to speech which causes psychological and emotional harm.

Professor Jane Duncan of Rhodes University, writing in the South African Civil Society Information Service, or Sacsis, is critical of this approach. She is not alone in arguing for a narrow interpretation of hate speech to be adopted by the courts.

In the Malema case, the FXI argued that if the offending sections of the Equality Act are found to be constitutional, the courts must take into account more factors than mere incitement to cause harm.

The courts must consider, among other factors, the intention of the speaker, the audience receiving the speech and the meaning of the text.

It is hoped that the outcome of Qwelane’s challenge will provide clarity on what hate speech is.

Cliffhanger is contracts, not hate speech

The case was argued in the high court in Johannesburg on Tuesday January 26. While Cliff’s case is a product of the recent debates about racism, Cliff is not accused of hate speech in this case.

Instead, Cliff is seeking an order preventing M-Net from holding Idols SA auditions until he is reinstated as a judge, because he believes he was wrongfully fired.

His counsel, Dali Mpofu SC, argued that the case did not turn on freedom of expression, or even accusations of racism, but that it was a purely contractual matter.

M-Net fired Cliff as an Idols SA judge after he said people did not understand freedom of speech. This was in response to a Twitter poll asking if Penny Sparrow’s racist remarks were free speech.

The South African Human Rights Council has received complaints about Sparrow. If her remarks are found to be hate speech, it could be argued that her comments were not protected by the clause in the Constitution which deals with the right to freedom of expression.

But Mpofu said the case was about the unfair termination of Cliff’s contract and not the merits of his remarks.

M-Net says it had no contract with Cliff and so the contractual dispute was moot. Judgment was reserved.