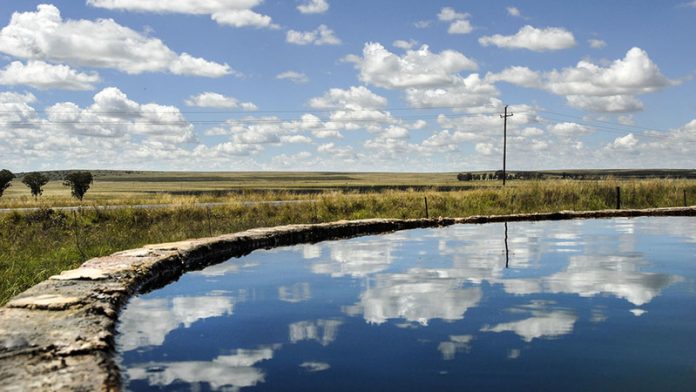 Sinking a borehole and striking water requires a combination of luck and feel. Under the ground, water flows along faultlines and pools in unseen caverns. The only clues come from the surface, where the type of rock gives an inkling about what lies beneath. The process would be easier if South Africa had a comprehensive map of its groundwater resources and who is using them. But it does not.

“Groundwater issues are often not granted equal priority in national and international water management discourse.” The bland Southern African Development Community (SADC) statement – a product of bureaucratic necessity – carries a greater truth: groundwater is not well managed in the region. SADC’s 15 member states have more groundwater per person than Europe and Asia, but use only 1.5% of that water.

The situation is slightly better in South Africa. Groundwater accounts for 13% of the country’s total water use. But in geographical terms, two-thirds of the country relies on the resource. Most of the country is semi-arid and has perennial rivers, which flow in summer – if it rains.

The water and sanitation department says some 300 towns and villages rely solely on groundwater. These are places that have no other source of water. Water officials dub these the “last 5%”, because it is too expensive to build the infrastructure to get water to them.

Their water comes out of the ground through a combination of springs and boreholes. How much is being used – and how much is available – is anybody’s guess. Research by Dr Shafick Adams of the Water Research Commission says the country has an estimated 10?million cubic metres of renewable groundwater. In a normal drought, this drops to seven million, but the current drought has dropped reserves to such a low level that nobody knows how much is left.

Extracted groundwater can be replaced by rainwater, but if too much is taken, the resource goes dry indefinitely. The water affairs department says only 4% of annual rainfall infiltrates the soil to recharge the water table.

This makes it a resource that has to be carefully managed, says hydrologist Alan Johnston. But that is not happening. “A lot of drilling is done – for both industry and individual households – and there is little control over what resources people are drilling into, or how sustainable that is,” says Johnstone.

Poor data is a key problem. Big projects to map groundwater reserves are still ongoing, but there are few measures of how many people are taking water out. The government has traditionally relied on people’s goodwill to hand over that information. There is no national control over the drilling of individual boreholes, unless a municipality has a specific bylaw to that effect. Legislation only kicks in when it comes to the industrial use of borehole water. In effect, anyone can drill a hole in the ground and suck up as much water as they want.

This is an acute problem when South Africa has experienced its lowest levels of rainfall in the 112 years for which records have been kept. Water affairs has appealed to the sense of the greater good when addressing people extracting too much groundwater: “If everyone uses groundwater for their needs – and not their greed – there will be enough water for all the citizens of South Africa.”

But that common-good narrative appears not to be working. Farmers and villagers around the country have reported that their boreholes are going dry. Agri SA says farmers in the Free State maize belt used to hit the water table at 15m. Now they are drilling to 500m and finding nothing. With dams going dry, these farmers now have no backup.

In provinces such as KwaZulu-Natal, the dams that supply water for irrigation are also drying up, with some dam levels down to 30%. Lesotho, whose highlands water project supplies South Africa with water, is experiencing its worst drought in 30 years.

Felix Reimer, a hydrogeologist, says the drought has forced people to use more groundwater. “Because we do not have a good idea of our groundwater, there has been over-extraction all over the country.”

This is reaching a crisis point, with little rain falling to recharge the underground aquifers, he says. “We are facing a groundwater crisis because it is not being properly managed.”